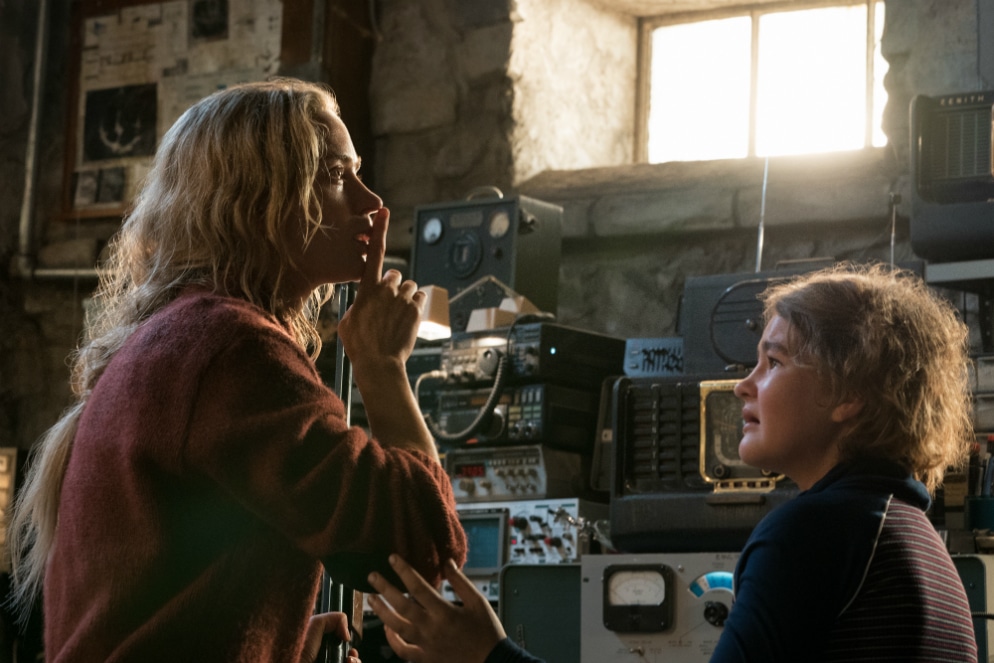 With A Quiet Place, John Krasinki has made his mark quite loudly on the horror genre. After this weekend, the multi-hyphenate will no longer just be known as “puppy-faced Jim from The Office“, he’ll be regarded as an exciting writer/director to watch (and listen to). Following up his two relatively well-received (but little seen) earlier efforts (the David Foster Wallace adaptation, Brief Interviews with Hideous Men, and Sundance entry The Hollars) with a studio film was a bold move on Krasinski’s part, yet by surrounding himself with a top-notch crew including an Academy Award-nominated team of sound editors Erik Aadahl and Ethan Van der Ryn, film editor Christopher Tellefsen, cinematographer Charlotte Bruus Christensen, production designer Jeffrey Beecroft and placing real-life wife Emily Blunt at the epicentre of his production was highly intelligent decision making by the filmmaker.

Taking place in the not-so-distant future, A Quiet Place opens on a mother’s worst nightmare (or at least one in a supernatural thriller). Evelyn Abbott (Blunt)’s son Beau (Cade Woodward) is quickly snatched up and brutally slaughtered by an extraterrestrial being (resembling a cross between Alien‘s xenomorphs and Stranger Things‘ demogorgon). These deadly otherworldly creatures have terrorized the Earth, killing millions and hunting their prey based on sound. The world has gone silent and the few survivors, including the Abbott family (played by Krasinski, Blunt, Wonderstruck‘s Millicent Simmonds, herself deaf in real-life, and Wonder‘s Noah Jupe, respectively) have adapted to leading their lives without making a sound.

A year later and the family are still (soundlessly) mourning the death of their Beau, each blaming themselves and wishing they had reacted differently that day. Evelyn is now nine months pregnant but the grieving process has taken a cumbersome toll on the foursome. Things take a sharp turn for the worst when (father) Lee and (son) Marcus are out on a fishing expedition, and daughter Regan angrily runs away, then Evelyn’s water breaks and then, of course, one of the deadly creatures sneaks into their house. Amidst all the jump scares (and there are plenty) and claustrophobic angles, the most terrifying sequence is watching Blunt wince and cry through the horrific pain of an unmedicated childbirth, all the while doing so silently in the hopes of not getting attacked. For female viewers, it’s one of the most viscerally frightening scenes in a horror film since Rosemary’s Baby.

What makes A Quiet Place so memorable, however, is not just its well crafted nail-biting inducing scenes (which is most of the film, save for a sweet respite in the form of a Neil Young-set slow dance), but the all too real family drama that grounds the movie in reality.