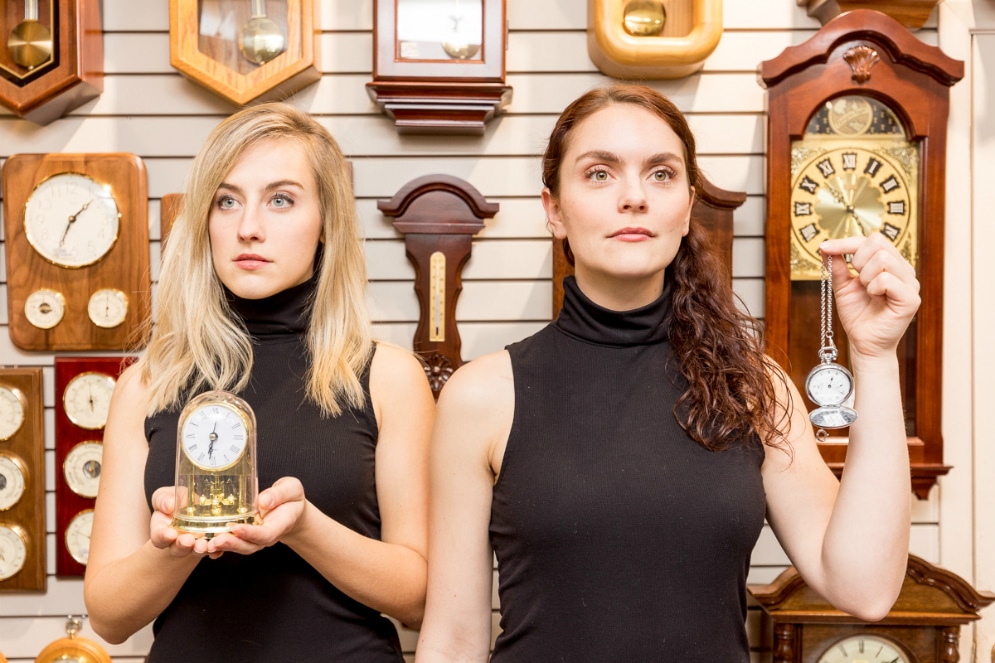 The new show from Templeton Philharmonic leaves a fair bit to the imagination. For example, who knew that the show would actually begin in line outside the venue, when a man in a tuxedo (who is never identified by name), asks for small trinkets from audience members to be placed into a time capsule, (I volunteered a coat check receipt, which was not mentioned on stage). The show also doesn’t have a program, only a small postcard with the name of the show on the front, (and another show on the back). Lastly, if one has not been informed that Templeton Philharmonic is a duo consisting of Gwynne Phillips and the eponymous Briana Templeton, there are no introductions made.

The show’s plotline itself was quite nebulous, and it’s really a collection of skits based on time periods throughout history (and the future), played to great effect by Phillips, Templeton, and the aforementioned man in the tuxedo, who reappears occasionally and not always in formal wear. The standouts were a skit from the 1990’s about The Internet, a surprisingly existential piece about share croppers in the Dark Ages, and the way in which the duo manipulated technical glitches to enhance the sketches, and which helped make the Victorian Era sketch even better. What I like about the duo (plus one) is that they are topical without being preachy, dirty without being over-the-top, and best of all, consistently hilarious. They take turns being the straight man, rely a little too heavily on accents, and perhaps need to improve endings, but the show is absolutely Time well spent.