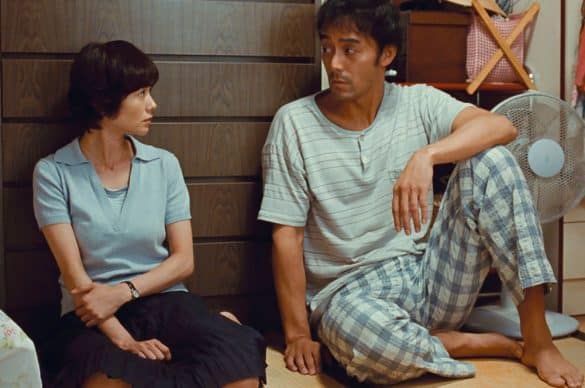 2016’s Our Little Sister was a good film, but deemed to be “minor Kore-eda”. Now the Master (seriously, he played in the Masters program at TIFF) has returned with After the Storm and once again the Japanese Auteur seems to be working in a major key (it helps that this work is not based on a Manga).

Featuring many of Hirokazu Kore-eda’s repeat stable of actors, (Hiroshi Abe from Still Walking shines in the lead role of Ryota), the film feels intimately familiar. And indeed, everything is note perfect, from the placement of the camera to the minimal use of music. Even the scenery seems placed there to be captured, as much of the filming takes place outdoors. Indeed, there is only one element that seems less than perfect — the pacing. It saddens me to say this, but the movie is languid. While there is intimacy and truth and profundity in the quiet moments, the thing is that the film needs to be savoured.

Unless the option exists to watch the movie on a giant screen with nary a distraction, (luckily the film is playing at the TIFF Bell Lightbox, among other places), it’s problematic to go into this film with distractions. Also, the title seems slightly off and one wonders if the translation doesn’t quite cut it. The Storm of the translated film gives way to a discussion of a typhoon in the opening sequence. Actually, there are twenty-three typhoons, and the ending of the film brings with it the twenty-fourth.

But in addition to the literal Storm, there’s quite obviously a metaphorical tempest in the title, as Ryota has certainly seen better days, as a novelist and as a father. His attempts at reconciliation with his son Shingo (Sosuke Ikematsu) is startling and his descent into the depths of a personal typhoon (much better word than Storm) as well as the performance by Kirin Kiki, also from the director’s Still Walking, as Ryota’s mother Yoshiko is well worth watching. The film doesn’t quite measure up to the even more masterful Like Father Like Son, but is well worth an investment, worth watching on a rainy day or night.