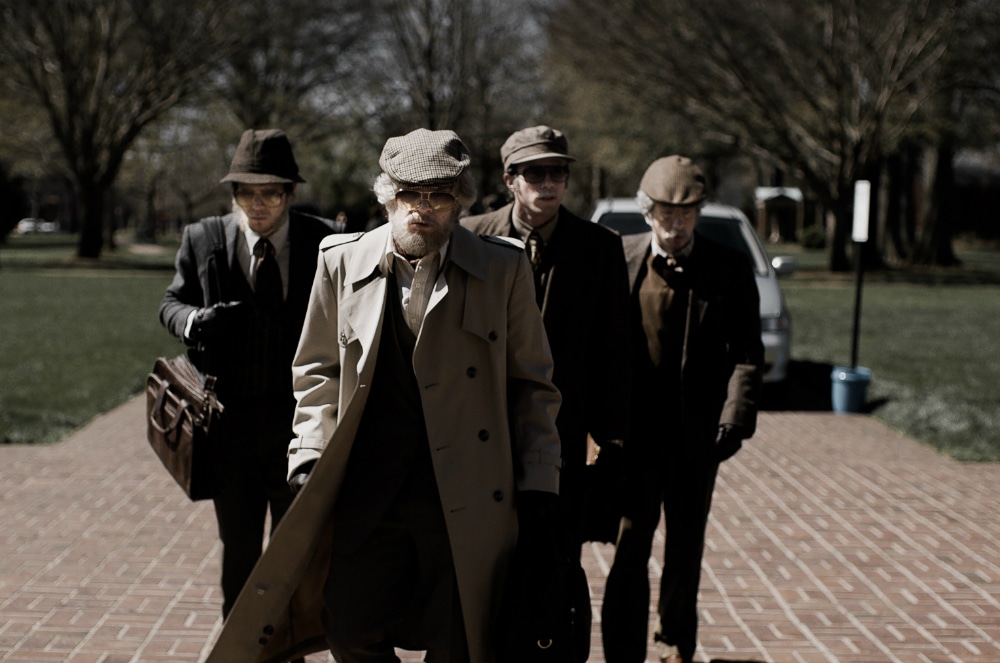 It’s a dangerous game, making a film where the characters acknowledge their story is like that of a movie. It risks engendering thoughts of other—perhaps better—films. Despite its lacquer of hard “truth”, this is what happens in writer-director Bart Layton’s American Animals. The film may leverage documentary-lite methods to offset its obvious cliches, but much like the characters learn: this kind of art crime doesn’t pay.

We meet Spencer and Warren (Barry Keoghan, mute, and Evan Peters, straining) as they drift around Lexington, Kentucky, in college and bored. Then, in what Layton presumes to be a clever recurring twist, we meet the actual Spencer and Warren (and others), talking to the camera and explaining themselves. A plan to alleviate their drudgery and (relative) pain emerges: they’ll steal valuable art books from the school library and fence them. As a heist premise, it’s a good one, requiring the usual planning, plus two more crew members, Eric (Jared Abrahamson) and Chas (Blake Jenner)—both of whom could have been used more in the film. However, somewhere in the middle of the borrowed shots from The Dark Knight, canned Ocean’s 11 and Reservoir Dogs references, Warren actually watching The Killing (only the first half, I assume), a late-night confrontation with, uh-huh, an animal, and Udo Kier (of all people), I had to ask: what is the point here? Watching privileged collegians screw up in their mission for excitement is just not enough of a motivating factor. By the time one of the real-adjace characters says “I’m not even sure if they know why they did it”, it reads as a logline for Layton’s entire film.

American Animals never quite decides what it would like to be about, until the non-fiction elements force its hand. There’s a parallel at work here, but it’s not a good one. The heist goes wrong (as it must, and did), except so too does the film. And when the forced (or law-enforced) payoff arrives, we’re supposed to take it as profound, or at the very least as an ambiguous meditation on truth. Instead, despite all these “real” elements, the film and its conclusion feel fake. Even the tears, when they come, are of the crocodile variety.