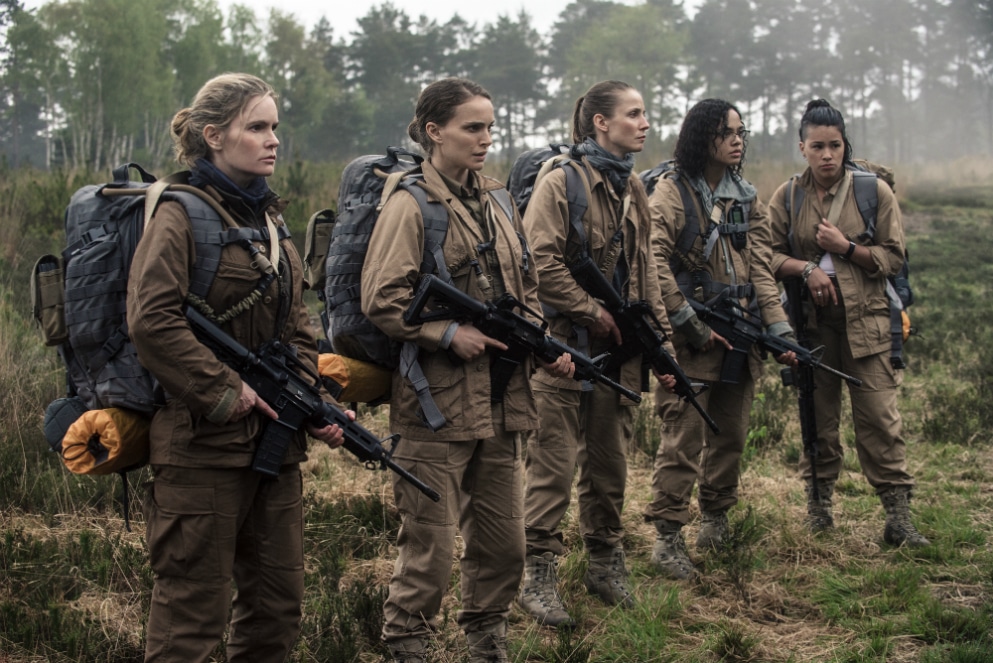 It’s hard out there for science fiction auteurs. The peak films of the genre are so entrenched, their mere existence discourages would-be creators; meanwhile attempts to subvert or reimagine the form are often met with dismissal or abject scorn. Apparently there’s nothing new under the sun(s). Into this void steps writer/director Alex Garland and Annihilation. At its best, the film aspires to new heights in sci-fi; an admirable quality, if only it could survive the climb.

Annihilation centres on Lena (played with usual brow-furrowing intensity by Natalie Portman), a woman with a career arc that could only come from a sci-fi novel: former soldier, current biology professor. (Yes, I know the film is based on a book by Jeff VanderMeer.) After her wounded husband Kane (a muted Oscar Isaac) makes a surprising return home, Lena is conscripted by Dr. Ventress (Jennifer Jason Leigh, asleep) to find out what happened. This means entering the mysterious zone known as the Shimmer, along with a thinly written trio of experts (Tessa Thompson, Gina Rodriguez, Tuva Novotny), and diving into the unknown. Now, the novelty of an all-female team is indeed a welcome change here, but it feels largely cosmetic—other than a couple of jokes at the usual macho way of things. Their reaction to, say, an alligator with shark teeth is about the same. Once Annihilation gets to the Shimmer, it eventually moves into some tense, gross, and confounding visuals and ideas (including, yes, mutated animals). You may end up gripping your armrest, assuming you’re not left scratching your head.

It’s impossible to really unpack Annihilation any further without stalking into spoiler territory (or without 500 more words), but here’s an attempt. There’s no doubt the film is unsettling, but I ask: to what end? Its questions are supposed to bedevil, its images are meant to trouble in their ambiguity. But once everything in the film is burned away and we arrive at the conclusion—one that strains for Solaris-level profundity—I remain skeptical there’s anything left to divine. Sure, it’s a trip, but there’s no there there.