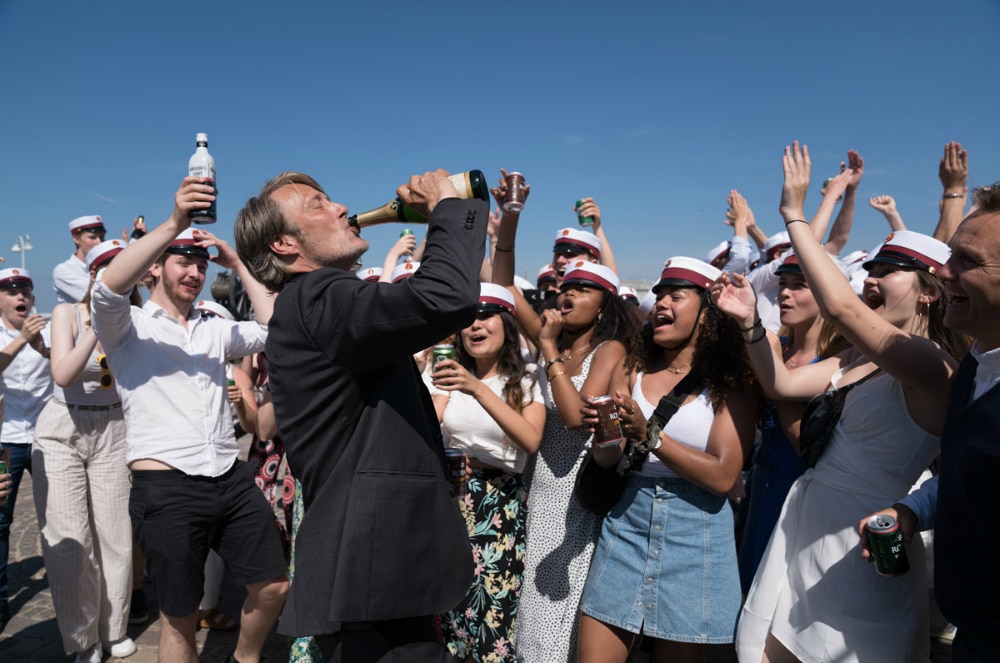 “We’re not the first people in the world to drink a little alcohol during the day,” says Peter (Lars Ranthe) to his friends Martin (Mads Mikkelsen), Tommy (Thomas Bo Larsen), and Nikolaj (Magnus Milland). This is true, yet so it goes in writer-director Thomas Vinterberg’s Another Round, in which these men, teachers at the same school, attempt a drinking experiment to liberate their professional and personal lives. It’s certainly one way to approach a mid-life crisis.

As co-written with Tobias Lindholm, Vinterberg’s film is about more than that, e.g. middle-aged men drinking too much. Or to put it another way: it finds a more insightful way to be about that. As led by Mikkelsen’s Martin, Another Round is both entertaining and cutting; it has its party but deals with the hangover too. The film’s foursome are facing different situations—loneliness, boredom, ageing—and while the idea to drink more is admittedly not new, their “scientific” approach puts a fresh spin on the proceedings. This premise also grants the film a sense of discovery (and tension) that steers it away from the bog of depression. These men are determined to fix themselves, and while alcohol is the tool of their liberation, it’s clear they’re just looking for an excuse (or a cover) to get at what’s really in their hearts. Again, that’s not to say Vinterberg avoids the consequences of this drinking experiment. The film captures that, and along with Mikkelsen’s performance, which veers from withdrawn to delightful, draws a fulsome image of life in motion.

Now, it’s true that the struggles of well-off, middle-aged white men are not exactly the most pressing issue of our times. In fact, an argument could be made they’re the central authors of many an urgent problem. Viewed from a different angle, however, Another Round works as an attempt to undo this pain, to clear the emotional blockage at its source. Alcohol need not be the solution, of course, but trying to be more open, connected, and vulnerable couldn’t hurt. Hey, I can drink to that.

Another Round will be available to rent on digital.tiff.net on December 18