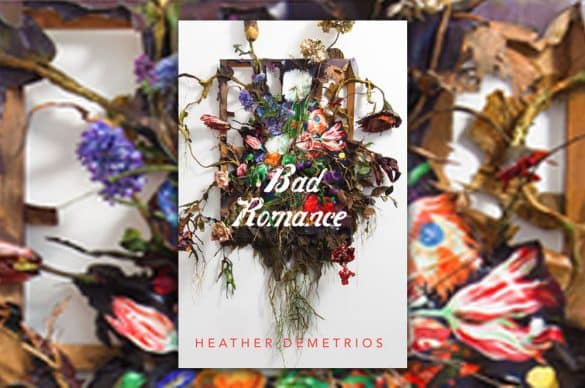 In one of the most affecting and effective books that I’ve read this year, (that’s book, period, not Teen or Young Adult or any other sort of designation), Heather Demetrios hits the reader over the head hard with Bad Romance. Perhaps what is most surprising about the book is that the generic title (which is referenced by the author), doesn’t take away from a serious plotline. In fact, Lady Gaga is referenced a number of times, as are a number of other contemporary songs that all seem to make up the least strong part of the story (at least in my opinion). With a better moniker, and perhaps less of a focus on the healing power of songs, which is about as close as the author comes to proselytizing, the book would be one of the best of the year.

As it is, it’s a well-trod story. Girl feels bad about school and life, girl meets boy and starts to feel better, but boy turns out to be a (fame) monster. It’s clearly modelled on Demetrios and her own experiences, which serves to make it that much more heartbreaking and is by no means an easy read. But readers that want something lighter and sunnier should perhaps look elsewhere. The repeated appeals to “leave the boy” are given to the protagonist many times by friends and support figures and while the greatest enemy is clearly the boy, the girl herself is her own worst enemy in that she doesn’t muster up the courage to get up and leave him. Demetrios is perhaps most efficient at showing the “why”, and how hard it is to make the move even when it’s clearly the correct thing to do. That’s what makes the book so difficult to read, which is that her choices become our choices and unless she musters up the courage to leave, we can’t leave either, experiencing the anguish in one long letdown.

Bad Romance is a tough go but a necessary one for readers of every age.

Bad Romance was provided by Raincoast Books in exchange for an honest review. It may be purchased from your friendly independent bookseller or other fine bookstores.