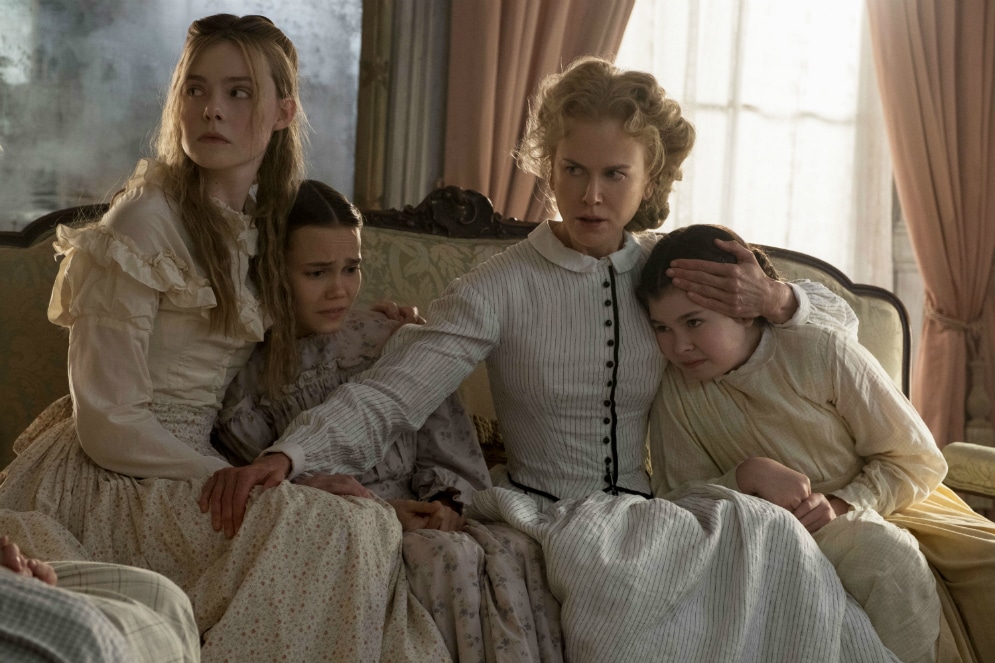 Sofia Coppola’s The Beguiled feels a little like her earlier work The Virgin Suicides, and not just because of the presence of the ethereal Kirsten Dunst. The earlier work, adapted from a Jeffrey Eugenides book, featured the rare pronoun “we”, which was handled expertly by the director. Here, she adapts a film based on a book, but switches the perspective from that of a man, to that of a woman. Specifically, seven women, as the stars of The Beguiled act as a sort of collective unit. Their behaviour is magnified by their clothing, dressing mostly in white or shades of white, (save for one dinner scene, which will be explained later). The lighting and choice of material is also mainly the same, shot in dark strokes at first by cinematographer Philippe Le Sourd, but later becoming much brighter. The costumes (beautifully crafted by Stacey Battat) begin in white cotton and linen, and switches to silks as the women are transformed.

The movie hinges on the appearance of Union soldier John McBurney (played by Colin Farrell, using a lot of the same character nuances from his performance in Miss Julie), who is discovered in the woods of a boarding school by Amy (Oona Laurence), who recognizes that McBurney is the enemy (as the school is in the deep south in the Civil War), and yet brings him into the house because his leg is injured. Here, the women of the house (portrayed by Nicole Kidman, Kirsten Dunst, Elle Fanning, Angourie Rice, Laurence, Emma Howard and Addison Riecke), who vary in age, all seem to fall under the spell of an outsider in their midst. In short, they are all Beguiled.

The dinner scenes in particular are filled with tension (apt for this Southern gothic tale) and a sense of foreboding, but are also quite funny as well. It is remarkable that such a quick film, (under ninety minutes), can contain so many layers, and yet come across as straightforward. A deep dive suggests that the film could be read allegorically, or enjoyed entirely on its own merits as the work of a true craftsperson (Coppola was a deserving winner of Best Director at this year’s Cannes Film Festival, though we may have awarded her the Palme D’Or). 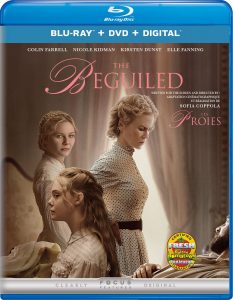 Directors as a whole aren’t usually too fond of commentary tracks but we would have appreciated one here from Coppola and at least some of her brilliant cast. The two featurettes included on the Blu-ray + DVD package (A Shift in Perspective and A Southern Style, respectively) are both too brief.

Though by no means a small film, The Beguiled feels reserved and quiet in a season of brash blockbusters. Make sure to seek it out and hopefully become Beguiled yourself.