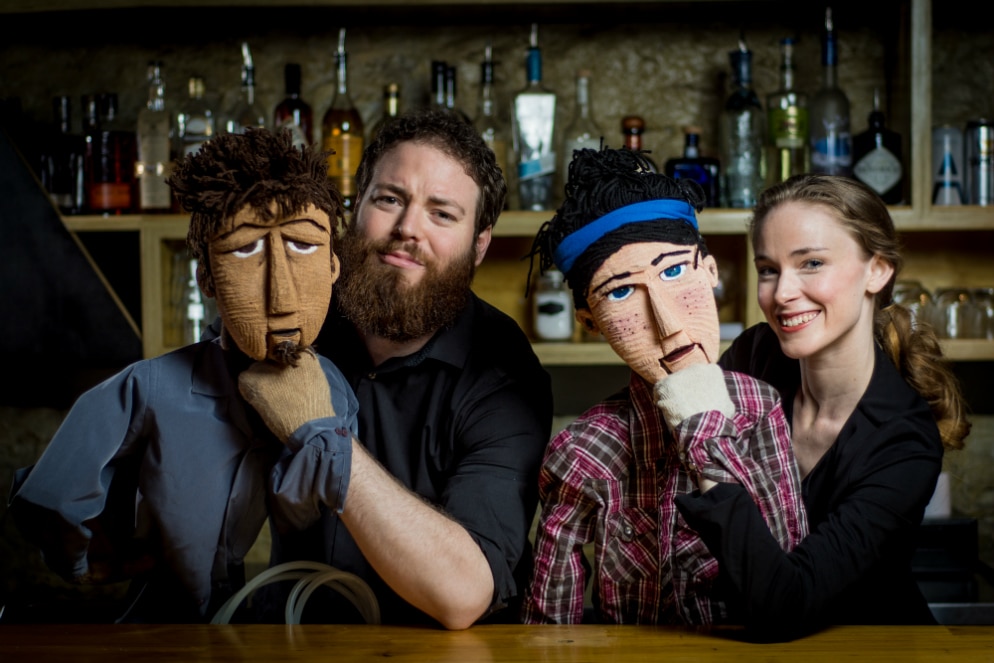 Three cheers for Bendy Sign Tavern, the site-specific puppet show by Sex T-Rex, at The Paddock, Toronto’s third oldest bar. In fact, three cheers for the cast, spotlighted by Joan, (the puppet’s name is Joan, actually), and a band of lovable misfit characters (and some numbers), in the frenetic show. The cast of Bendy Sign Tavern clearly sweated out the performance, (literally, as I saw perspiration on some necks), as the show incorporates the entire bar, and goes through some tight spaces on its way up, down, and around, in the story of a struggling musician (at 32 years old!), and her assorted misfits that populate a bar, (Bendy Sign Tavern, because the Sign is Bendy), including a barfly that is an actual fly, because why not?

The trouble with a puppet show musical, (although it wasn’t exactly a musical, it had music so therefore it was musical), is that comparisons are going to inevitably be made to Avenue Q, and while a fun, high-energy performance, this is more of an Avenue B+. Kaitlin Morrow is strong as Joan, (inhabiting Joan?), but the supporting cast is all dudes and surprisingly not all uniformly strong, (though I did like Seann Murray as the Spanish bar owner and other characters). Oh, and the piano player was fun, providing actual piano accompaniment and occasionally telling jokes.

Unfortunately the piece has a really mushy middle, hitting the highs at the beginning and definitely at the end, and felt a bit yelly and containing too few laugh out loud moments, (though a couple), and perhaps not as many as its title, which from what I understand is a recycled joke (yet still funny).