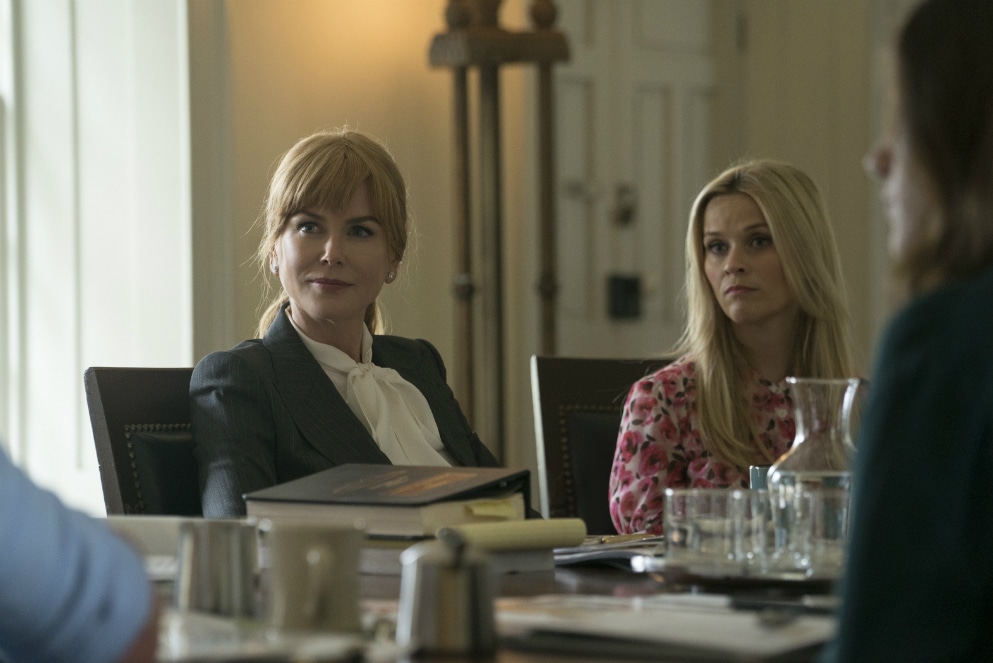 The HBO limited series, Big Little Lies, is a fascinating study of working mothers trying to have it all and yet handicapped repeatedly by men. Based on Liane Moriarty’s best-selling novel of the same name (and only altering the setting of the book), the 7 episode Jean-Marc Vallée (Wild, Café de Flore) project is daring television, even by HBO standards.

Though its basic premise is centered around a murder mystery (wherein the victim and the culprit is a complete mystery and only unveiled in the final episode), the show is most compelling in its portrait of the central three women-Madeline, the closest we’ll ever get to the real “Don’t you know who I am?!” Reese Witherspoon, played by Vallée’s Wild lead, Witherspoon herself; Celeste (Nicole Kidman), a former corporate attorney and now stay-at-home mother to two twin boys, and plain Jane (Shailene Woodley), whose move to picturesque Monterey with her sweet son Ziggy (Iain Armitage) sets the events of the show in motion.

There’s a reason why the key stills released from the show are of the central trio. The women are their best selves and, more importantly, feel nakedly vulnerable and free to be their true selves, when they’re together. Celeste rejoices about a work achievement to Madeline, confessing that she wants to be more than a mother to her young boys, and yet when she returns home to her verbally and physically abusive husband Perry (Alexander Skarsgård in a career-best performance), she quickly lowers her eyes and her whole body shrinks when she mentions the very same achievement.

In the words of Chimamanda Ngozi Adichie, “We teach girls to shrink themselves, to make themselves smaller”, and that is precisely what these women, including Celeste, do around the men in their lives. “Maybe he was just having a bad day”, Jane reasons about the man who physically assaulted and raped her, which resulted in Ziggy’s conception years prior. “I make him feel insecure”, Celeste rations to her therapist regarding Perry’s abuse. In a later episode, when Perry casually retorts that he should have killed her (after she, quite literally, injures his manhood), it is the female therapist’s positive reinforcement that pushes Celeste to take action. Though shame and past trauma bounds them together, Celeste, Madeline and Jane are stronger when they have each other’s full support. Having seen 6 of the 7 Big Little Lies episodes, I have a feeling we’ll be dissecting and unpacking the details of the show for years to come, but its central conceit of the power of female camaraderie is an essential lesson needed in the age of Trump.

To be honest, I was very disappointed with the scant supply of special features on the Blu-ray + Digital HD package. The behind-the-scenes look at the series that includes cast interviews is both short in length (less than eight minutes) and short in behind the scenes details. However that’s plenty more than we get with the all-too-brief ‘Inside the Episodes’, which are barely a minute each. Hopefully HBO Home Entertainment will release a more comprehensive package just in time for winter awards season.

Big Little Lies is the very definition of Peak TV and should be the golden standard filmmakers look to when producing future limited series. Emmy voters, give it all the awards!