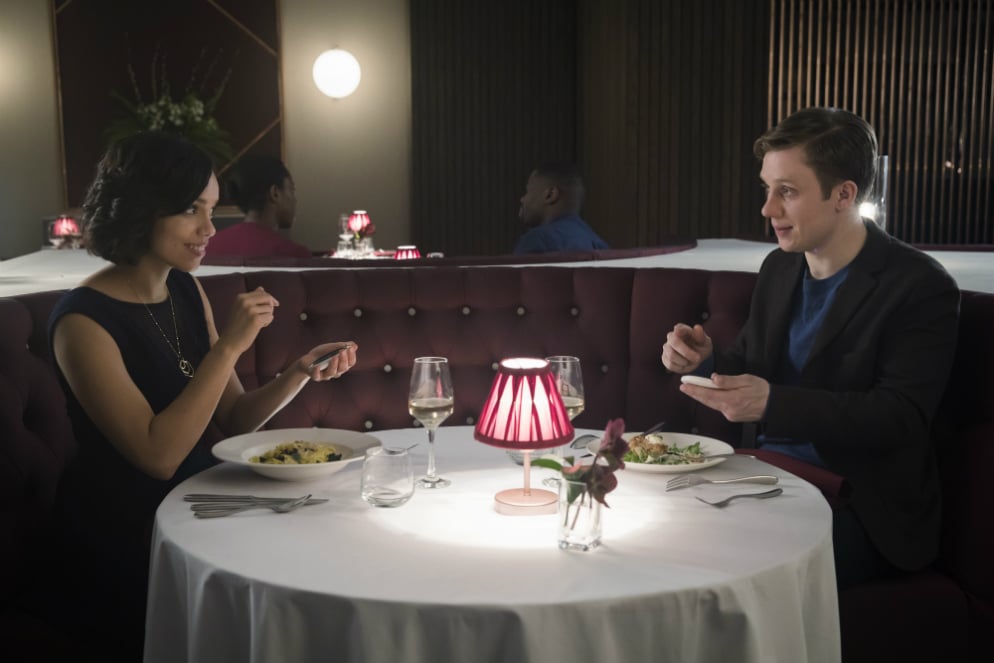 A new season of Black Mirror means time to rejoice, because the Netflix model is perfect for the anthology (see Easy by Joe Swanberg), but even better for the Charlie Brooker-style of anthology. Because although Brooker creates and writes the show, every episode is dramatically different in tone, style, even filming location. This season has some of the strongest episodes of the show and perhaps some that are less than perfect.

But first, the positives: the episode Hang The DJ, with Joe Cole and Georgina Campbell as Frank and Amy, was one of my most anticipated (Cole was extremely charming but tight-lipped about the episode when I sat down with him at TIFF), but the episode directed by Tim Van Patten (Boardwalk Empire) delivers (and then some). It’s tough because it struggles with comparisons to last season’s standout episode, San Junipero. I found the episodes dissimilar and if it was similar to another Black Mirror episode, it would be 15 Million Merits, and besides, I preferred Nosedive with Bryce Dallas Howard. Cole is the lead of the episode and he’s great, with a blank-faced expression on which much can be projected, but Campbell is the standout of the episode and perhaps of the season (she seems destined to become a huge star following her highly touted Broadchurch stint). The dating app aspect of the episode is perhaps the most Black Mirror-y, but the soundtrack, and especially the titular song (Panic, by The Smiths) drives the episode home. In fact, I cried a little at the end, as not all messages need to be about horrors of technology.

The ArkAngel episode, lensed by Jodie Foster, made great use of Toronto as its “small town” setting, and featured a number of great Canadian performers (Jenny Raven as a nurse and Matt Baram as a psychiatrist), and Rosemarie DeWitt is delightful in everything, even as a clingy and panicked mother of a daughter, (you’ll see why in the episode). Crocodile is a dark piece of Icelandic noir with Andrea Riseborough in two different looks. It’s a gritty but rewarding watch, directed by Jon Hillcoat of Triple 9 and The Road fame. In addition, David Slade controls the action of Metalhead, a black and white post-apocalyptic dreamscape which suggested a “dog eat dog” world and is a welcome addition from the Hannibal helmer.

I didn’t care as much about the Jesse Plemons and Cristin Milioti opener USS Calister, aside from a great inside joke about Netflix. It’s perhaps a little too long, focused on Gamergate, and seems to be better in concept than in reality, though Billy Magnussen (Ingrid Goes West, Into the Woods) should be in everything. Perhaps the less said about Black Museum the better, though Letitia Wright is great and the attempt to bring together the Black Mirror universe is admirable, but the tonal shift and half-formed ideas are not.

So if the attempt is to select the optimal Black Mirror Netflix experience, dial down the centre (the middle episodes). Make sure to Hang The DJ.