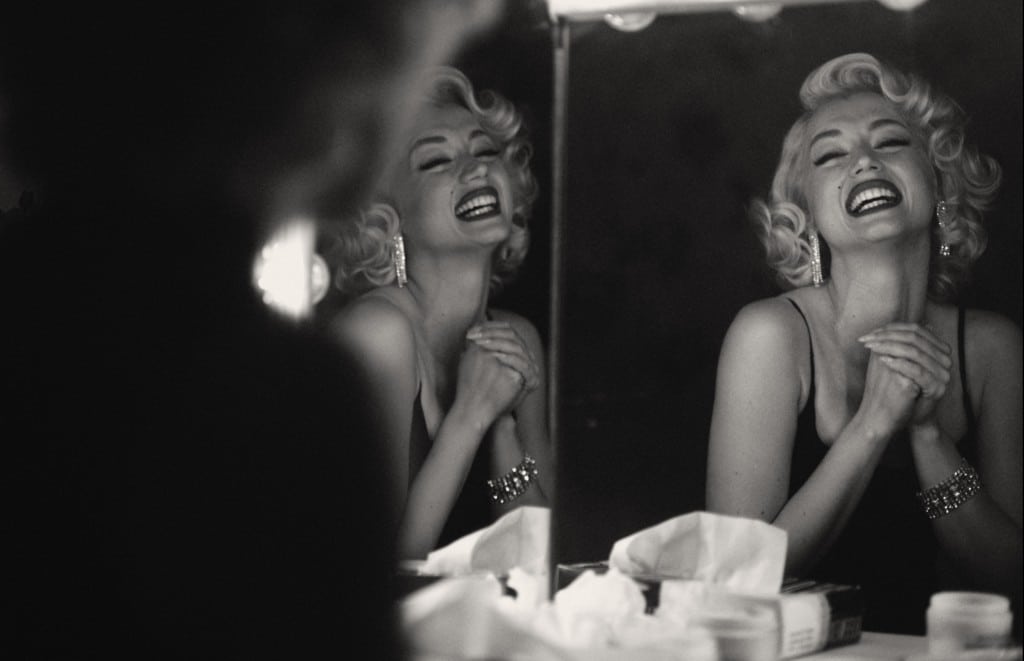 While not a new idea, it’s perhaps still laudable for a film to address all the ways in which fame, and, more specifically, powerful men destroyed Marilyn Monroe. On paper, and as drawn from the novel by Joyce Carol Oates, that’s what writer-director Andrew Dominik’s Blonde is about. Which makes it all the more curious that his film makes little effort to hide its contempt for its iconic subject—even as it visualizes so much well-known cruelty.

After establishing the complete absence of her father and the dangerous instability of her mother (Julianne Nicholson, in a truly thankless role), Blonde introduces us to Marilyn née Norma Jean (Ana de Armas) as she rises up in Hollywood as a pin-up girl and actress. While there aren’t formal chapters to the film—in effect, Dominik blurs the expanse of Monroe’s life here, fictionalized or not, into one long blush—its story can be demarcated by the adjacent men. First, it’s the drunken sons of Charlie Chaplin (Xavier Samuel) and Edward G. Robinson (Evan Williams), then husbands Joe DiMaggio (Bobby Cannavale) and Arthur Miller (Adrien Brody), and as her life’s spiral gets worse, President JFK (Caspar Phillipson). Oh sure, Monroe’s movies (e.g. Gentlemen Prefer Blondes and Some Like It Hot) also shape the film, but we’re never quite allowed to see what made her special in those roles—or, save for the briefest glances, what made her special at all. Other than that, of course, she was a beautiful woman, used and abused by almost everyone who came near her. In this, even as de Armas guilelessly throws herself into the performance, questions from Dominik seem to hang over the film: why couldn’t she just act right, speak up, get help?

Now, with Dominik’s overwhelming technique and—as an admitted fan of his previous work—obvious filmmaking talent, Blonde is a spectacle, if nothing else. But by the time we’re watching de Armas stumble again into a room, grin uneasily into one more flashbulb, or, good grief, lose another baby, a certain numbness settles in. We’ve seen enough.