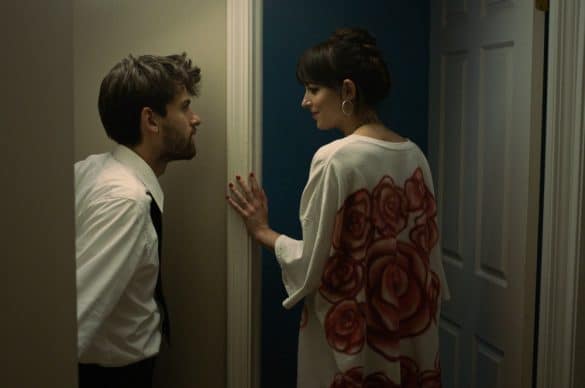 Kudos to writer, director, and star of Cha Cha Real Smooth, Cooper Raiff, for making another film in his own honour. Sorry, I don’t mean to sound catty; his latest Sundance-anointed darling is indeed a feel-good movie, a blast of well-meaning earnestness which positions Raiff’s stand-in on a journey of self-discovery towards becoming a better grown-up. That’s all fine and dandy, but the film still made me cringe.

As a follow-up to Shithouse‘s intro to college, Raiff sets Cha Cha Real Smooth in the post-grad period when adult life starts rushing up fast. He plays Andrew, a charming young man at loose ends living with his mother (Leslie Mann), younger brother David (Evan Assante), and step-dad Greg (Brad Garrett, in a thankless role). His enthusiasm gets him a “party starter” job on the local bar and bat mitzvah circuit, putting him in the path of Domino (Dakota Johnson), for whom he falls madly in love. Johnson’s character has real enough life challenges—an autistic daughter, Lola (Vanessa Burghardt), a distant fiancee, the burden of simply being too beautiful—but they pale in comparison to what Andrew is dealing with, namely, uh, how hard it is to be so caring and sensitive in this cruel world. That’s this film’s main problem: Raiff seems to want to confront various serious issues (e.g. mental illness, alcoholism, broken families), but all of his solutions come back to Andrew tearfully hugging this or that injured party and realizing life isn’t so bad. To his credit, Raiff is a winning presence on-screen, and his comedic editing chops have been further honed here, but vibes can only take a film so far.

With Cha Cha Real Smooth, I couldn’t help but recall 2004’s Garden State, another inspiring film to many young people (myself included at the time) made by a similar writer-director-star, Zach Braff. The players and parts are different (though both films are set in New Jersey), yet the effect is the same—I’m just too old now for it to have the same hold over me.