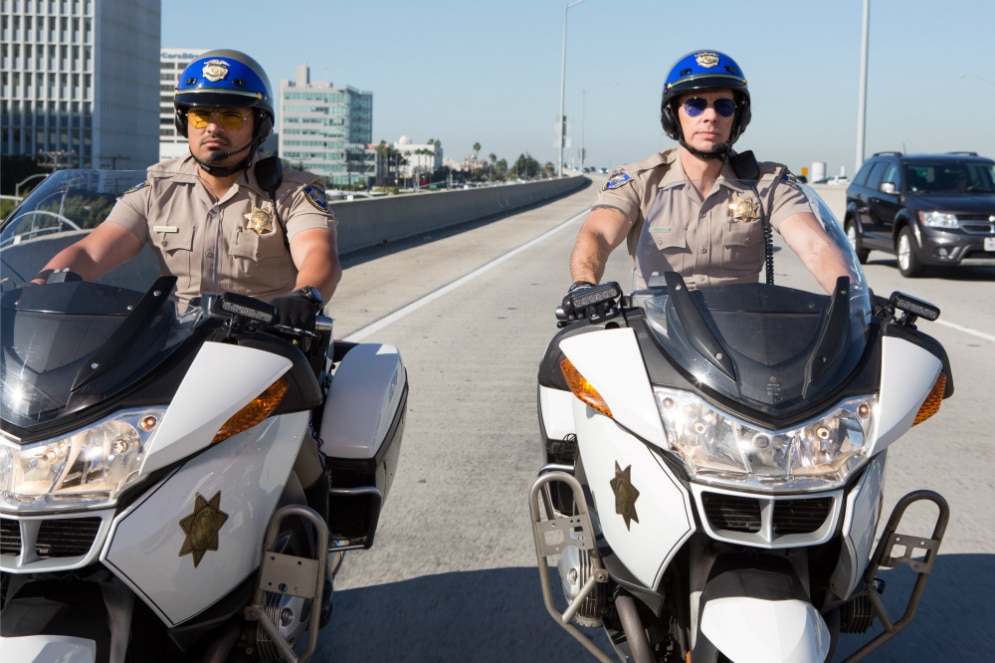 ChiPs (and yes, this is how it is spelled), is a movie about the California Highway Patrol. So it’s interesting that the opening shot is a black title card with white writing that states that the California Highway Patrol didn’t approve the movie. If the emphasis wasn’t quite strong enough, another bit of writing underneath provides a little bit of clarity. “At all”.

Essentially, ChiPs resembles the TV Show only in that its two protagonists Jon Baker (Dax Shepard, who also wrote and directed), and Frank “Ponch” Poncherello, (Michael Peña) have the same names as they did in the TV show, in which they were played by Larry Wilcox and Erik Estrada. Other than that one is Hispanic, and one is not, this is not a winking homage but a straight up re-imagining.

The premise is mainly that Ponch has his stuff together, (though it gradually devolves), and that Baker is a hot mess, covered in scars from his biking career (Ducati is featured prominently). Peña works for the FBI, and through some combination of factors comes to work undercover and is actually named Castillo. Baker is separated from his wife Karen, played by Kristen Bell, his real-life wife. Ponch has a problem with sex addiction, and Baker rebuffs the friendly advances of Ava Perez (Rosa Salazar), who offers to go riding with him. Along the way, a litany of familiar faces show up in small to medium sized roles, (Vincent D’Onofrio as the big bad, Jane Kaczmarek as the police chief, Ryan Hansen, Adam Brody, Vida Guerra, Mae Whitman, Ed Begley Jr, Josh Duhamel, Maya Rudolph, Adam Rodriguez, Isiah Whitlock Jr.). The film seems intent to earn its Hard R rating through some pretty graphic references, some nudity, a ton of explosions, car chases and an ending that references a running joke throughout the film. It’s a little bit Jump Street, but seems to be its own ride. 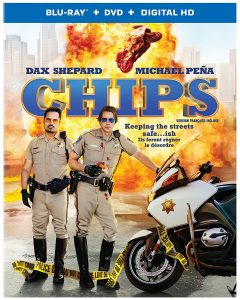 The best of the special features is “This Isn’t Your Father’s ChiPs” which is actually quite funny and insightful. It features a great opening from Shepard, “I was just pretending to be looking at this for the first time”, and shows the kind of movie that he intended to make. The contributions from his cast are delightful and Hansen and Kaczmarek in particular explain what they saw in the film. Deleted scenes, a stunt explanation (no green screen) and a Ducati feature are fairly pedestrian.

What Shepard did well is surround himself with up and coming actors and actresses (Rosa Salazar, Jessica McNamee, Canadian Justin Chatwin and Megalyn Echikunwoke) suggesting that he has an eye towards the future of the franchise.