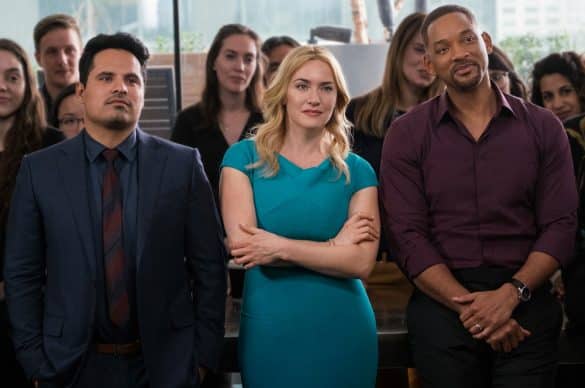 Containing but a single special feature, the Blu-ray of the David Frankel film Collateral Beauty arrives on March 14th with a relative absence of fanfare. Collateral Beauty was a critical and commercial disappointment, though there are elements of an interesting narrative in this title, but they are repeatedly buried under an avalanche of well-intentioned but nonsensical main plots.

The largest misstep is a focus on a catatonic Will Smith (playing a character named Howard, but really just being a toned-down Will Smith), playing a role that seems recycled from his work in The Pursuit of Happyness (or Adam Sandler in Reign Over Me). His work is mostly opposite Naomie Harris in a twist that should be obvious to anybody who has seen Certified Copy, or who has watched a movie start to finish, and somehow manages to make the now popular subject of child death seem insensitive. Naomie Harris (Moonlight) is almost entirely wasted in the film, which is a shame as she is a great actress.

Also faring less than well are the strange pairing of Michael Peña and Helen Mirren in another under-baked trope, Ann Dowd in a role that should be quite obvious, and Keira Knightley in a strange liaison with Edward Norton (who apparently ordered a script rewrite). The less said about Jacob Latimore as Time, the better. Faring best is Norton paired with his on-screen daughter Allison (Kylie Rogers), who work in a Hamilton reference for good measure. It is essentially an Oscar movie that just does not quite work, and perhaps would have worked in the hands of a more capable director or with a working script that didn’t telegraph every twist. 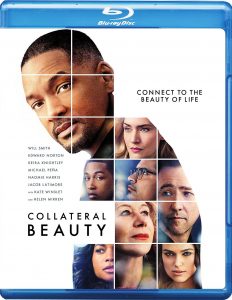 The singular special feature on the disc, A Modern Fable: Discovering Collateral Beauty, features the principals talking about how this movie is a fable, which is perhaps the intention, and provides some clarity but should have gone towards matching the vision to the execution.

Collateral Beauty is available now on Digital HD and comes to Blu-ray on March 14th.