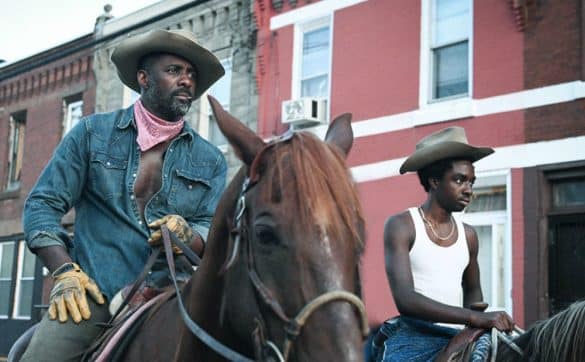 There’s something about the image of people riding horses through incongruent surroundings. In Concrete Cowboy, directed by Ricky Staub (and co-written with Dan Walser), we see Black people from north Philadelphia grooming, racing, and trotting on horseback along derelict city streets. It’s enough to send the soul soaring—if only the film around these images could measure up to their singular power.

These surroundings are where Cole (Caleb McLaughlin) finds himself after another fight at school, having been dumped on the doorstep of his estranged father Harp (Idris Elba). Reluctant at first, Cole learns about Harp’s community-oriented work with horses while also being taken in by old friend Smush (Jharrel Jerome), whose smile belies his criminal enterprising. Staub’s camera takes this all in with an obvious appreciation for the ramshackle nature of the stables and streets on which his film’s characters live. These are not pretty lives per se, but they are lived with dignity—or at least an ambition for something more. Unfortunately for Staub, even with the help of several charismatic actors, Concrete Cowboy can’t decide when, where, and how to gallop.

That unevenness pulls us in a few directions, involving tales of cowboy history, gentrification, drug dealing, policing, and even a shy romance. It’s eminently possible to enjoy everything in Concrete Cowboy—the cinematography from Minka Farthing-Kohl is pleasing, for example—but it’s hard to shake the feeling of a missed opportunity. The film’s story should be a great ride, yet it just moseys along.