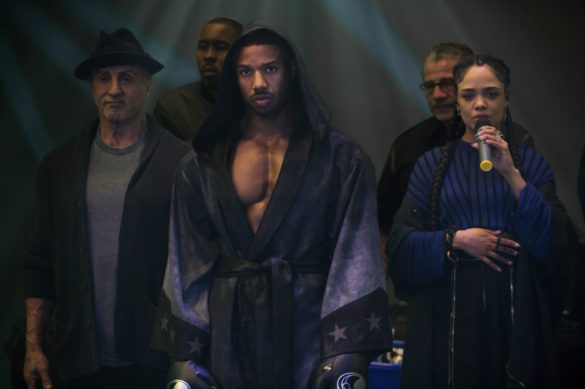 Creed II isn’t exactly a knockout punch. It was nice to see Tessa Thompson, as Bianca Porter, making hearing aids look cool. However, she is not given much to do other than sing (and even that is pitch corrected), and in general, Creed II suffers from a lack of female representation. In fact, the major difference between Creed (which I didn’t like as much as most, but preferred to this one), and Creed II is that there is far too much scowling and grimacing in this one. It also plays like a nostalgia trip, as if J.J. Abrams was tasked to remake an earlier Rocky film.

As it is, the action plays out fairly well, and Michael B. Jordan gives a fine performance, his second best of the year, easily, as the titular Adonis “Donnie” Creed. It’s even better to see The Hate U Give’s Russell Hornsby as a twisted (we presume) boxing promoter, but after one standout scene he mainly falls into the background. Sylvester Stallone, who also co-wrote the screenplay, is mostly alright as Rocky Balboa, but his face has a little too much perma-surprise etched into it, and between him, Dolph Lundgren as Ivan Drago, and a mystery cameo, there’s a little too much work on display.

Speaking of which, Jordan is cut and looks the part of a boxer, although villain Viktor Drago (newcomer Florian “Big Nasty” Munteanu) is a little too big for the part, and looks like the two fighters would provoke a division in weight classes. Carl Weathers does not appear in the film as Apollo Creed, but hopefully was compensated for his many appearances as a photo or video footage from the earlier franchise. It’s a fast watch of a film, and generally speaking is a fun fight, albeit quite unrealistic, and Ryan Coogler’s replacement Steven Caple Jr. makes a mainly serviceable movie in which the beats mainly play out as unexpected, and as stated, isn’t quite a knockout, but it does pack a punch at certain times.