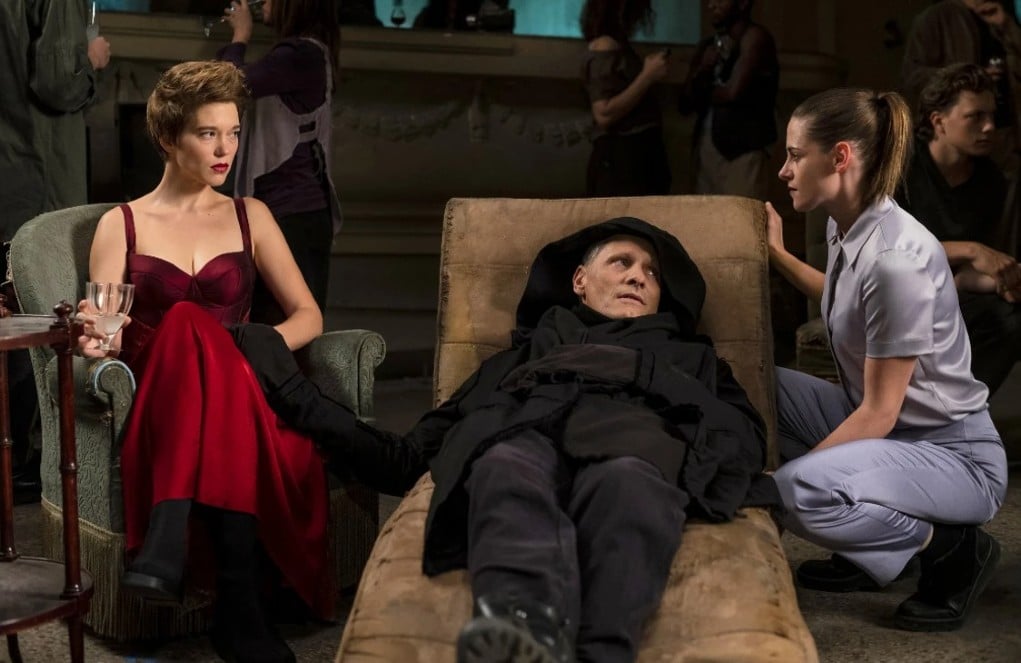 There’s not much of the broader world in writer-director David Cronenberg’s Crimes of the Future. The opening image reveals some grand, drowned structure yet most of the film takes place in dark and dingy places. Something is wrong in this time, but it’s not the external that has much grip anymore—it is, as always with Cronenberg, what’s inside. And what a wonderous and obscene place that is.

Pain is an afterthought in Crimes of the Future, one of a few simple admissions with profound consequences. Here’s another: artist Saul Tenser (Viggo Mortensen) grows strange new organs and conducts surgeries on himself with the help of his partner Caprice (Léa Seydoux), both as performance and out of apparent medical necessity, while existing between shady government forces and corporate interests. Into this uneasy configuration enters Lang (Scott Speedman), father to a murdered son who can eat plastic, which naturally (or unnaturally) turns the film’s story in an even more bizarre direction. What this boy has to do with Saul, the tense weirdos at the comically named National Organ Registry (led by Canadian stalwart Don McKellar and Kristen Stewart at 11), and other interested parties is revealed in time. These developments are not quite what makes Cronenberg’s film sing, though. The strength of his work comes via the combination of its deep intelligence, icy performances, and a pulsating score from long-time collaborator Howard Shore. Like his contemporaries, Pauls Verhoeven and Schrader, Cronenberg occupies a strange space in today’s cinema; he is a master filmmaker, now well outside the mainstream machine. And yet, here he is still facing the world as it is—or could be.

If you’ve been led to believe Crimes of the Future is shocking, gross beyond the pale in true Cronenberg-ian fashion, well, that’s not entirely true. Yes, the film is grotesque, but it’s also strangely comforting—it confirms something we should already know deep down. On display is a sick world, one Cronenberg suggests is inevitable now, which is what’s most disquieting about his film: why continue to fight its coming?