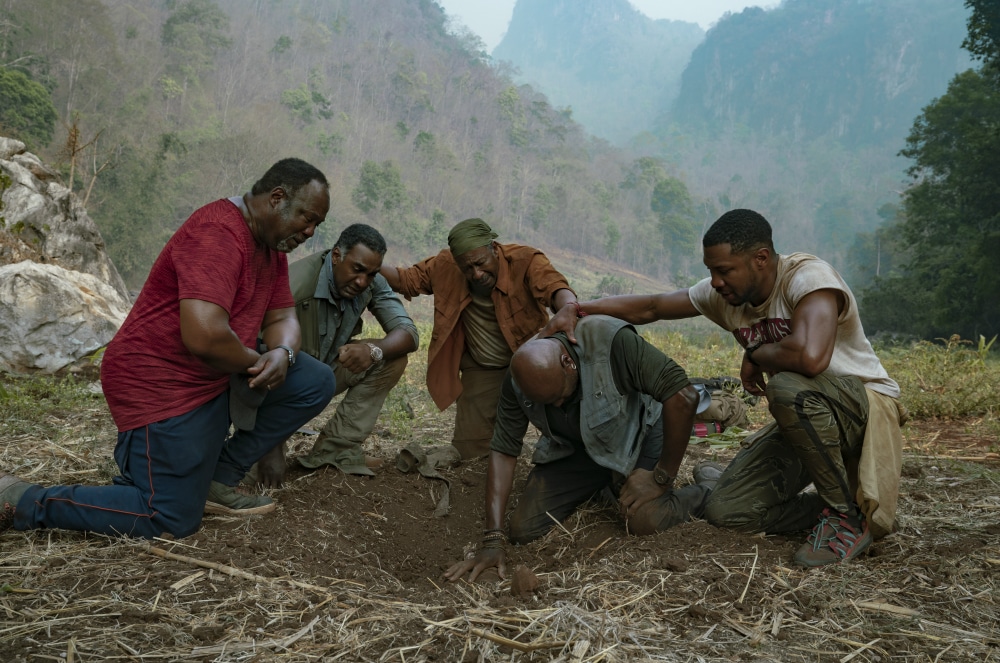 To enjoy Da 5 Bloods is to acknowledge, warts and all, that it is a Spike Lee joint. That spirit of defiance still courses through his work, even into his late-period. In fact, Lee now stands as one of the few—or only—Black filmmakers making outsized films such as this one. That’s an indictment of the entire movie-making system, but it does allow Lee to remain relevant, angry, thoughtful, and confident. He knows what he says has value and that he’s right to keep saying it.

Like Lee’s Miracle at St. Anna, Da 5 Bloods tells a war story through the eyes of Black soldiers. Here, we’re in Vietnam following Eddie (Norm Lewis), Melvin (Isiah Whitlock Jr.), Otis (Clarke Peters), and their de facto leader Paul (Delroy Lindo) as they revisit the country and their own memories. The squad’s actual leader, Norman (Chadwick Boseman), was killed in action after burying gold with a plan to return and retrieve it. Using flashbacks and other digressions, Lee gets into all of this (and then some), while having Norm voice the film’s revolutionary heart. In the process, the film moves beyond easy nostalgia or a glib Three Kings-style heist. It has those elements but Lee also plays with the expectations surrounding them. Similarly, his characters defy easy categorization. It’s a credit to the actors (Lindo and Peters, in particular) who carry this off—and it’s an altogether impressive feat by Lee.

Still, Da 5 Bloods is a rough movie. The film’s tone veers sharply in places and it revels in its excesses. It’s clear, however, that Lee would not have it any other way. This is not Apocalypse Now, but it is his way of saying: why can’t I make my version of that? The film exists in exactly that mode, connecting dots between U.S  imperialism, Black liberation, and the long-lasting results. This is no minor thing. So yes, we can pick Lee’s film apart—or we can offer daps for his bravery and boldness.