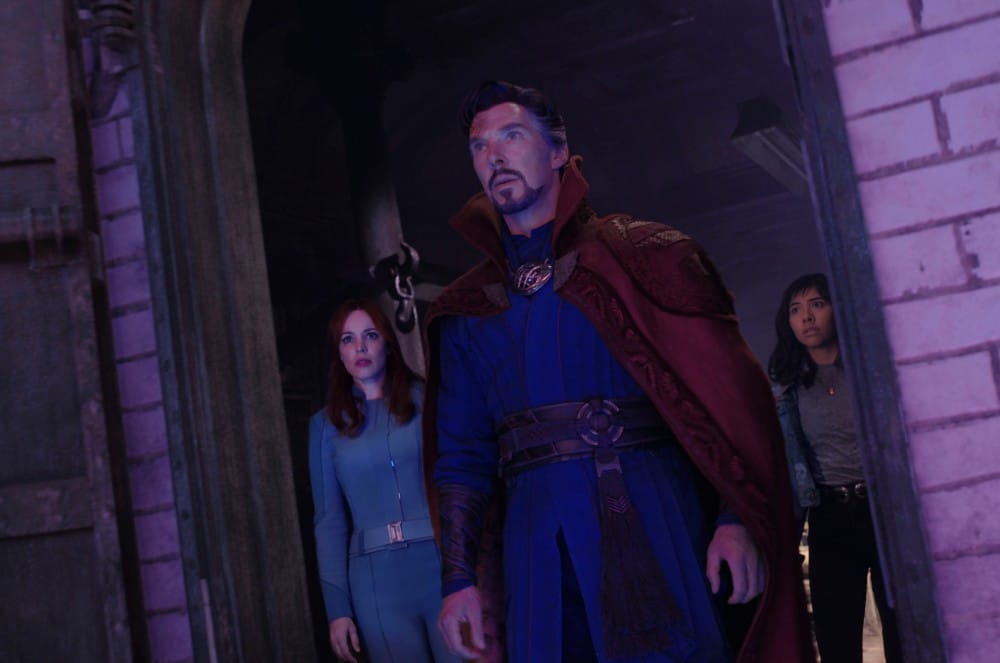 If you’ll permit me: the latest batch of Marvel content has felt particularly exhausting. Doctor Strange in the Multiverse of Madness, the newest entry into the company’s cinematic universe (which now includes numerous flat TV shows), sees the return of the titular character in his first solo adventure since 2016. While much has changed in narrative terms for the good Doctor, what’s on-screen is, alas, more of the same.

This is in spite of the film’s director Sam Raimi, one of the original Marvel men, and one of the few filmmakers working today with the technical chops, sense of humour, and actual desire to make comic book movies. Picking up after the events of WandaVision and Spider-Man: No Way Home, Multiverse of Madness finds Dr. Strange (Benedict Cumberbatch, who else) unsettled by dreams that collide with reality when newcomer America Chavez (contest-winner Xochitl Gomez) crashes into his dimension with demons giving chase. A visit with the Scarlet Witch (Elizabeth Olsen) does not settle matters and it’s not long before Strange is tumbling through realities, meeting alternative versions of friend and foe alike (including Rachel McAdams’ Christine Palmer; did you remember that character’s name?), and fighting to save the multiverse. There are additional layers here, plots weaving in from the previous Dr. Strange film and other events from elsewhere in Marvel’s grand CGI cathedral, but there’s not much heart to it all. Commenting on the performances feels beside the point as well—it’s all just in service to a plot that must grind on.

Still, Raimi is allowed to pull out a few of his old favourites (dutch angles, an evil magic book, Bruce Campbell), even with the crushing inevitability of Multiverse of Madness—and despite the title’s promise of, well, madness. Setting aside its surprising use of some Marvel icons, everything else in the film happens as we expect; and everything is in service to the next big thing. There’s of course the promise of more in the end, but to be honest: I think I’ve had enough.

Interview: This is Us’ Jon Huertas