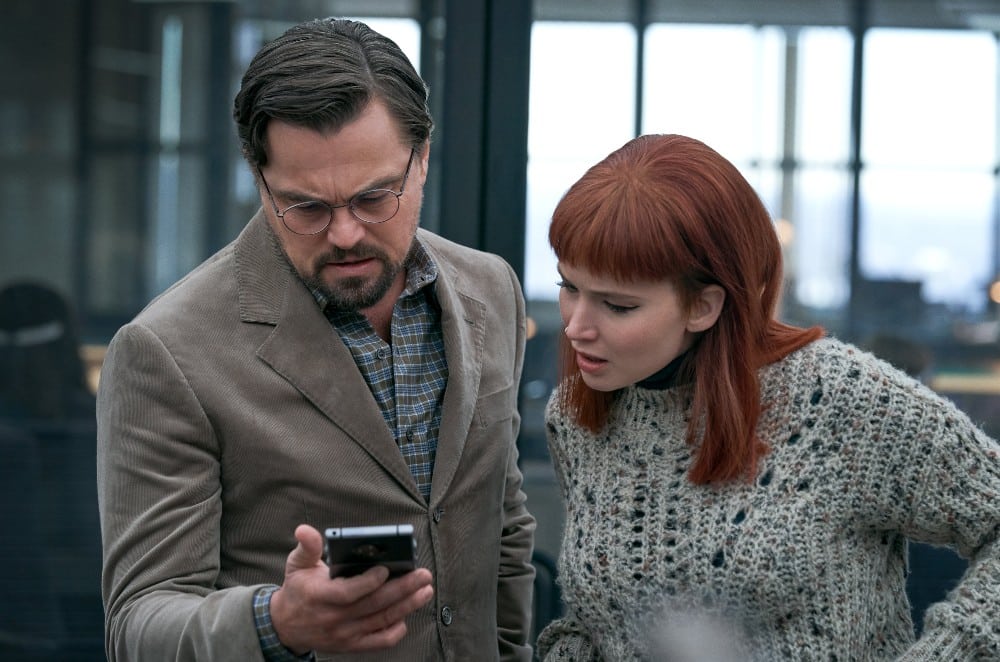 Director Adam McKay wants to be the great satirist of his age—except his films aren’t quite funny or insightful. Still, he has something to say, which is perhaps better than nothing. It’s this strange feeling that accompanies his latest film, Don’t Look Up, as it addresses the climate crisis by way of an extinction-level comet strike. Again, not funny or even novel, but at least McKay manages to send most of his punches in the right direction.

Befitting its presumed importance and preoccupations, Don’t Look Up is stock full of stars. The film opens with Jennifer Lawrence as Kate Dibiasky as she discovers an object zooming towards Earth. With the help of Leonardo DiCaprio (earnestly miscast) as befuddled Dr. Randall Mindy and Rob Morgan as Dr. Oglethorpe, her cry of alarm is brought to the attention of U.S. President Orlean (Meryl Streep, enjoying herself). And as befits McKay’s sense of America these days (to say nothing of defeated co-writer David Sirota’s), our heroes are rebuffed, told that what they predict will happen won’t happen—or worse, that there could be profit in it. The scope of the film expands from there with a wide cast brought to life by the likes of Cate Blanchett, Mark Rylance, Timothée Chalamet, and more. In all that sprawl, there are definitely bits to enjoy, even as the film hurtles (and curdles) towards its final third. Much like The Big Short and Vice, McKay is not necessarily wrong in his assessment, he’s just not as knowing as he thinks he is. For all his film’s worldly framing, it still sees the fate of the planet as wholly reliant on the United States.

I can still feel some sympathy for what McKay has done here—American-centric though it is—because, unfortunately, Don’t Look Up is not so unbelievable, which underlines its final cynical point. There is something of value to this film’s hard stare forward. And I assume if it should win any awards this season, it will have all been worth it for McKay and company.