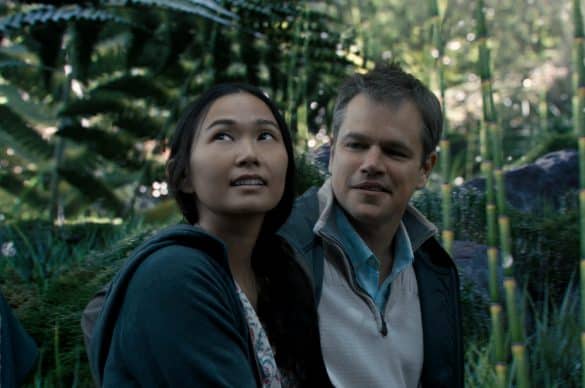 The Best Picture of the year is likely Dunkirk or perhaps some other movie that reinforces the theatrical experience. If the Best Picture corresponded with the most ideas in a picture this year though, the winner would be Downsizing by a landslide. Downsizing is certainly a watchable film, even at two hours and fifteen minutes. It’s never boring and contains a modicum of brilliant ideas from director Alexander Payne and his co-writer Jim Taylor. Yet it’s possibly his least well-made film (I loved Election, Sideways, even on a second viewing Nebraska, etc.) because it contains too many ideas, and thus, feels like a half-finished film.

The one in which Matt Damon shrinks as a person is perhaps the most interesting. He is a a schlubby looking guy with fat on his belly. He is an occupational therapist instead of a doctor and with a hard to pronounce name, lives in Middle America (Omaha, which looks a lot like Toronto), and has replaced his mother with wife Kristen Wiig. The story at its core contains a fascinating premise and is very much unlike that Martin Short / Dennis Quaid movie from the eighties and Honey, I Shrunk the Kids. But after presenting a series of fairly explicit procedures, the “going small” idea is essentially abandoned, and what takes its place are more half-formed ideas that are relevant, sure, but poorly executed. For example, Christoph Waltz is great in good movies, and usually rises above material in bad movies, but here he’s an annoying presence as Dusan, Matt Damon’s neighbour. At least Udo Kier shows up as well. In the middle of the film, an insignificant TV clip leads to the introduction of Ngoc Lac Tran (Hong Chau), and while Chau is being rightly celebrated at award shows, her accent is…troubling, to say the least.

Perhaps what is most fascinating about Downsizing is that there seems to be a good message at its heart. But to find the message, it requires stripping away a lot of layers, (Jason Sudeikis, Margo Martindale’s cameo, whatever is going on with the Norwegians, a late movie twist that seems to be another film in itself, an explantion of the shrinking technology), and I don’t believe I was Down.