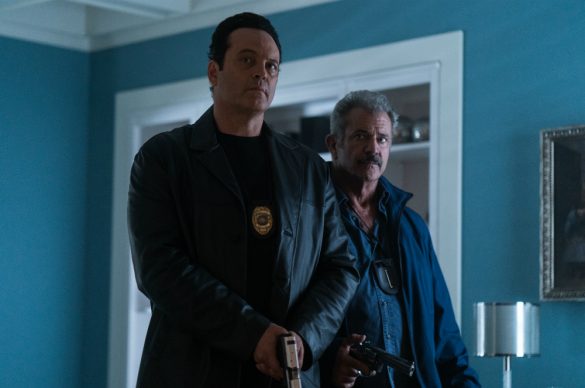 To say Dragged Across Concrete, the new film by writer-director S. Craig Zahler, is too long is redundant. We know that going in. Ditto the blasts of over-the-top gore; and, sure, you should probably brace for “problematic” content too, thanks to the ragged star power of Mel Gibson. Over two and a half hours (see?), the film eventually does build to a bloody climax (of course), and Gibson does his part to make sure it gets there. None of this was a surprise to me, except that I liked it.

Dragged Across Concrete is about three men: Gibson’s cop Ridgeman, his partner Anthony (Vince Vaughn), and just released ex-con Henry (Tory Kittles). The two cops are suspended from active duty thanks to cellphone footage of them handling an arrest in a less than officious manner. Henry, meanwhile, returns to a home in disarray. All three feel they deserve something better and decide to get after it. For Ridgeman and Anthony, that means pursuing criminals with an eye towards taking their loot. For Henry, it means working with said criminals towards the same end. How these three will meet is obvious from beat one, but the story is drawn out anyway. In the process, we meet some vicious criminals and have time for Zahler’s beloved (and mostly) delightful digressions. It’s here the director’s style is felt, building tension through laughter, competing viewpoints, and a critique of society that has pushed these men to the brink. It’s only when Zahler takes it at least one step too far—in an interlude featuring Jennifer Carpenter, for instance—that it feels gratuitous.

But then again, that’s Zahler. It’s what makes his films worth discussing even as we’re repulsed. For Zahler to work with Gibson (to say nothing of the pro-gun Vaughn) fits with his whole artistic world view, one that is as pointed as it is cavalier. The audience will surely ask why some of this film wasn’t cut, or its most unseemly action avoided in some way. Some will opine that Gibson should stay cancelled. This response is expected too, and yet I still had a hard time looking away.