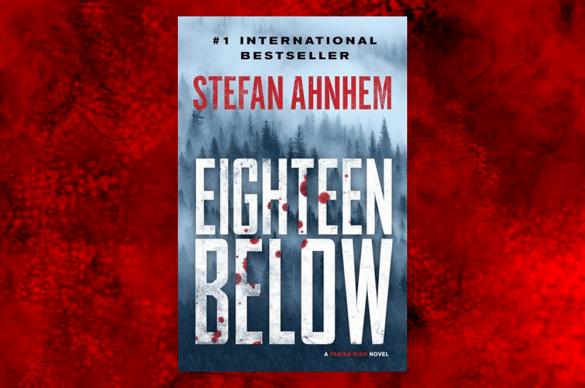 It’s clear that the season demands books that are reflective of winter, and though Eighteen Below by Stefan Ahnhem and translated by Rachel Willson-Broyles refers to the temperature of a body and not the weather, this books reflects the season. Namely, it’s cold as anything and bleak as hell. If you enjoy Nordic and Swedish thrillers, it’s receiving comparisons to Henning Mankell’s Henrik Wallander series and to the Steig Larsson books. While the comparisons of Swedes to Swedes is apt, I was reminded of Pierre Lemaitre at his bleakest. Because make no mistake about it, before you get into Eighteen Below and the two previous books in the Stefan Risk series, (which I hadn’t but I was able to dive right in), these books are grim as anything.

Yet the violence is far from the goriest element in this long but absorbing thriller. The element that seems to be most in evidence is the depths of human behaviour. It’s the kind of book in which anything upbeat or positive is followed by a fall into the depths of depravity, (I bet Ahnhem is a hit at parties). It’s a (Fabian) Risk, but luckily, I can handle a dark book, and the aspect that I found most lacking was the abundance of characters, both on the police side and the civilian one, and this aspect is complicated by the fact that mistaken identity is a major feature of the book, so I had to double back more than a few times and make sure I could keep track of everyone. It was also a novel of alternating perspectives, and the one of young and in love Theodor was perhaps my favourite, although like many of the threads, his desire for Alexandra seems to be heading in a dangerous direction. Risk’s wife Sonja also has an interesting development as Fabian seems to be suffering in his personal life, and the two overlapping cases make for a curious divergence, but don’t expect a clear terrain or a pat reveal.

Fans of Jo Nesbø, (Norwegian not Swedish, so it’s okay) will not blink, but I found Lemaitre’s books left me more shaken but less confused. Eighteen Below is still genre gold.

Eighteen Below was provided by House of Anansi Canada in exchange for an honest review. It may be purchased from your friendly independent bookseller or other fine bookstores.