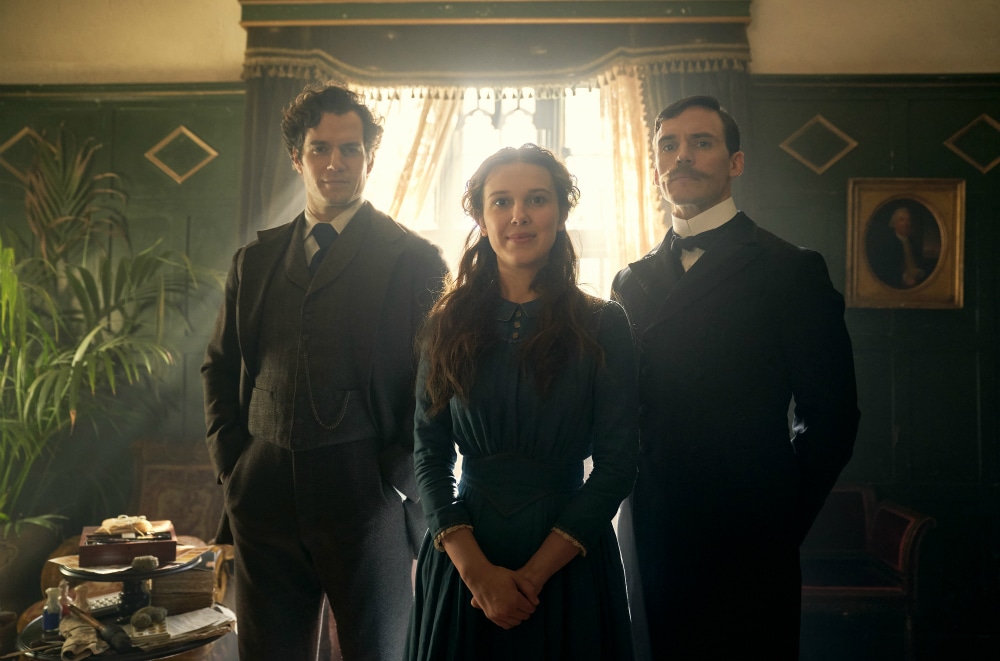 Did you know the Conan Doyle estate has taken issue with Enola Holmes, the new film from director Harry Bradbeer, for its portrayal of a Sherlock Holmes with emotion? As adapted by Jack Thorne from the book series by Nancy Springer, we’re meant to revel in feelings both high and low from all the film’s characters. And besides, Sherlock is not the lead here, so maybe the Doyles can relax. Or maybe they should sue the production for casting Henry Cavill as the world’s most famous detective.

Enola Holmes is that kind of movie, one that makes choices we’re not meant to take too seriously. Owing to its swift opening, we meet Enola (Millie Bobby Brown, having fun) and learn much about her upbringing and current mission. Her mother (Helena Bonham Carter) has disappeared and Enola takes it upon herself to find her—despite Sherlock and brother Mycroft’s (Sam Claflin) protestations. As one would expect, the story from there involves clues and adventure in equal measure. We also meet Lord Tewksbury (Louis Partridge), an in-over-his-head rich boy who holds the key to the film’s plot (and Enola’s heart). It’s all fairly straight-ahead stuff, played with much earnestness, despite its underlying progressive feminist message. For young readers, the appeal here is equally obvious, though the film version strikes me as a mite less clever. For one, most of the mysteries seem far too easy to solve; for two, many of Enola’s solutions involve violence to a surprising degree. That’s perhaps part of the anachronistic fun to be had here—but it also gets to be too heavy.

Though maybe I should lighten up. The truth is Enola Holmes achieves what it sets out to do. Brown is charming throughout, and the film’s plot moves fast enough to (mostly) outrun its questions and doubts. Sure, at just over two hours, it’s too long by at least 15 minutes, but perhaps the target audience wants to stay in this world for as long as possible—Henry Cavill and all.