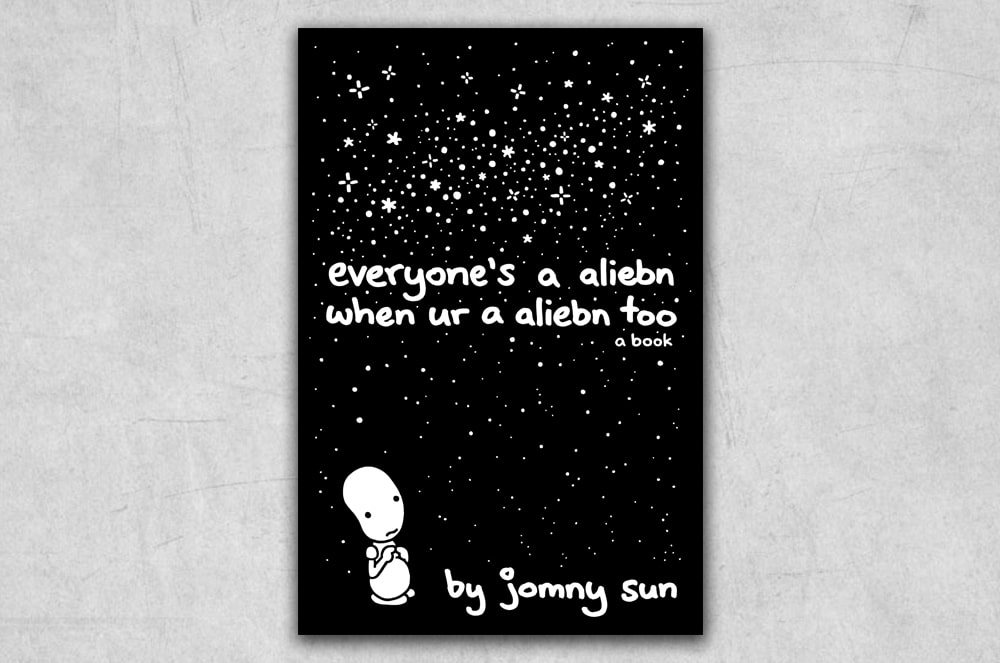 Jonathan Sun or Jonny Sun or Jomny Sun is a hero of “Weird Twitter” and while this style translates very well to a book, it still feels like it’s beside the point to review the book. Either one “gets” Jomny Sun or not, and this book isn’t going to win over many converts, (who include Lin-Manuel Miranda). This guy, (who grew up in Canada) is the real deal, in that his ideas are both silly and funny but also quite profound, and while the book is a little light on content, (it’s a pretty brisk read), it makes up for it in the representation of the brand, with style and pithy writing at the forefront.

The drawings are meant to look rudimentary, but more than likely took a lot of effort to be simplistic. The story starts on an alien planet, and involves an alien travelling to earth to speak with the humans. The irony is that of course he talks to everyone but the humans, and that animals can talk and interact and there are plenty of puns and aphorisms. My favourite, and one that got me chuckling a lot was an otter that was actually an “auteur”, and dresses the part and is always trying to set the scene.

Again, this might seem like a dumb idea, and while one doesn’t need to be familiar with Sun, it certainly helps. Otherwise, a person who is unfamiliar should start with his Twitter account, with its intentionally misspelled words, and then come aboard this gem of a book. The title is a line in the novel that makes more and more sense when we think it over, (even the silent b’s) and is somewhat appropriate in a time of a lack of self-examination. Sun provides some light (sorry) into the nature of human relationships without even presenting a human being. If the book stops a reader for one moment to carefully reflect and mutter “hmm!”, then it will have done its job and done it well.

Everyone’s a Aliebn When Ur a Aliebn Too: A Book was provided by Harper Collins Canada in exchange for an honest review. It may be purchased from your friendly independent bookseller or other fine bookstores.