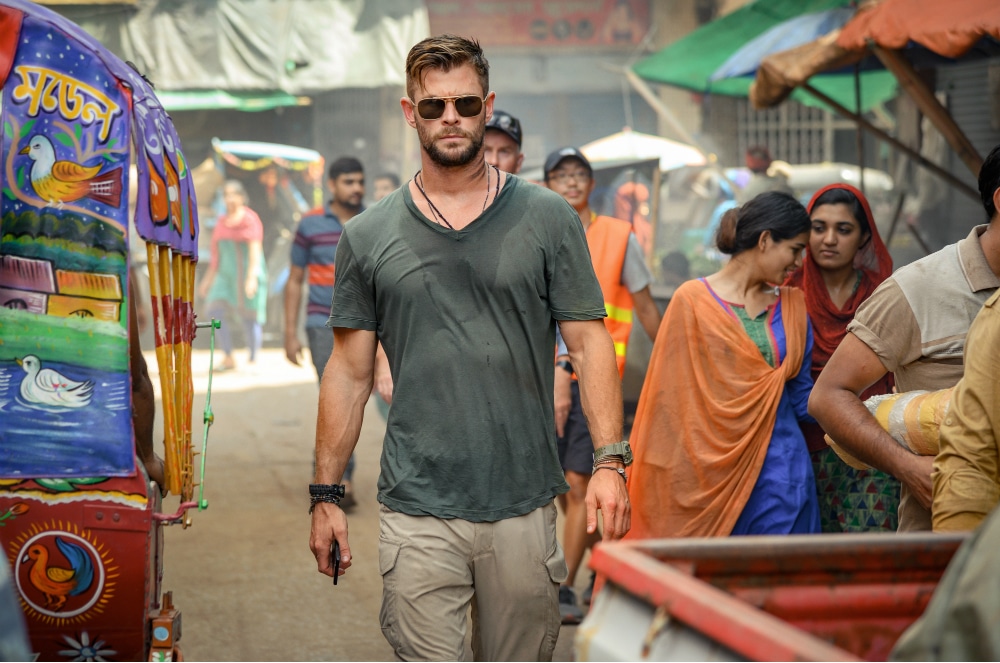 If the characters in Extraction, the new film from director Sam Hargrave, are driven not by the dumbest choices, then they’re at least moved by the most obvious ones. The film stars Chris Hemsworth as Tyler Rake, a mercenary-for-hire sent into Dhaka to retrieve the kidnapped son of an imprisoned Indian druglord. It’s not exactly noble work, yet off we go on an action-packed—and, sure, emotional—journey with Tyler anyway. Why else would all involved take such a mission?

As written by Joe Russo (of Marvel fame), Extraction is built around some extreme action setpieces and the not-uncharismatic presence of Hemsworth. Unfortunately, the star’s performance here is not in the jovial Thor vein, which tracks as a wasted opportunity. Instead, Hemsworth mostly just glowers and flexes—oh, and he fights; hoo boy, does he ever fight. To keep the aforementioned son, Ovi (Rudhraksh Jaiswal), safe and to escape the clutches of rival druglord Amir Asif (Priyanshu Painyuli), Tyler must use every weapon in his arsenal—fists, feet, guns, vehicles, an actual rake—on his way to film’s end. While I hesitate to classify these scenes as “good”, they certainly present a wall-to-wall front in terms of choreography, speed, and scope. The only thing lacking is a reason to care beyond the basic motivations of the cast. Again, everyone in this film is grim—save David Harbour, who briefly injects some levity—and the narrative’s foregone direction only makes us impatient for the next furious action scene.

In that, however, there’s yet another problem. Extraction is based on the graphic novel Ciudad by Russo, which clarifies much of the film’s tone. Unlike his Avengers movies, however, this film requires some grip on the real world to work. That Marvel (and money) connection instead allows everything to be technologically-amped to unreal levels. Hargrave’s camera swoops impossibly in and around every moment creating a final effect that is entirely facile. Sure, we want Ovi to survive, and Tyler too—but we never believe they can die, let alone have lives to which they’re supposed to return.

Win a Digital copy of Hustlers!