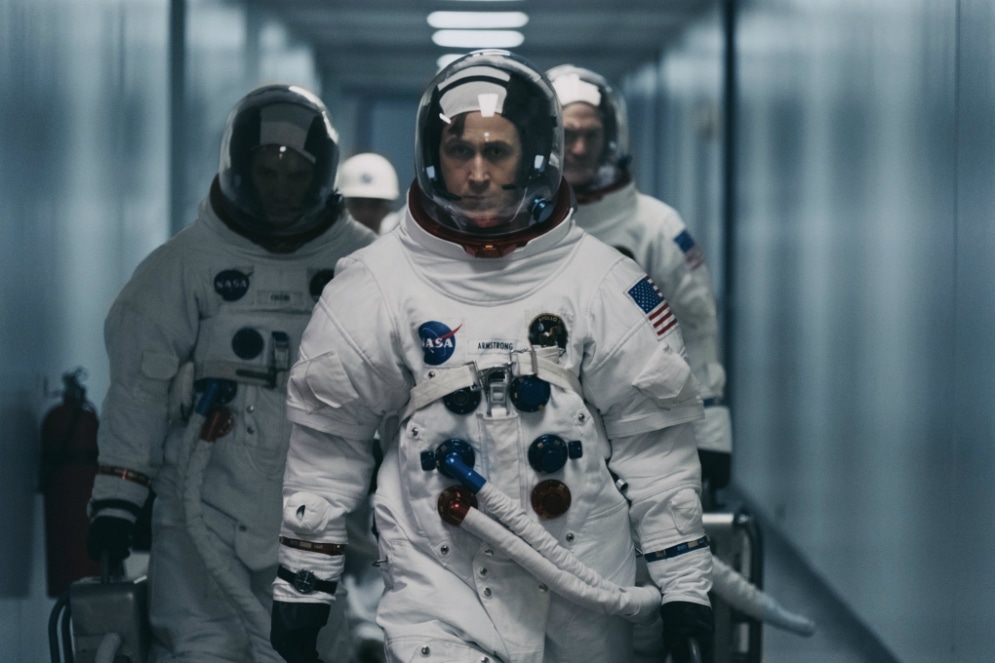 The space film dichotomy goes something like this: take us somewhere transcendent or keep us grounded in humanity. As a student of film, director Damien Chazelle likely knows this, yet his new film First Man attempts a middle path; it strains to break the bonds of gravity while approximating only select parts of human behaviour (the grim stuff). In the process, the film finds success as a nuts-and-bolts technical exercise and, true to Chazelle’s real passion, as a study of obsessives.

In that latter sense, Neil Armstrong (as played by muse Ryan Gosling) is the ideal subject. Before making history, the famed astronaut was an engineer and test pilot, one of many striving to go higher than ever before. As the film reveals, however, Armstrong was also dealing with the death of his infant daughter, a trial that puts him both at-risk for the space program and trains him to become its ideal candidate. For Gosling, the role places him at the far end of his own acting dichotomy in the embrace of extreme stoicism. His Armstrong is distant, tense, and repressed, with his flip-side charms turned way down as a result. First Man fills in the story’s more lively details with help from the arresting Claire Foy (as Janet Armstrong, the wife) and enough square jaws to fill a Saturn V rocket (Kyle Chandler, Jason Clarke, Lukas Haas, Christopher Abbott, and on and on). To Chazelle, who revels in cold technique over a warm touch (e.g. Whiplash over La La Land), these are all just more tools at his disposal—along with his inalienable talent—for launching and landing this film. And he is nothing if not confident in exactly how to do it.

Still, Armstrong is a square and we know, despite the danger and pyrotechnics, First Man’s mission will succeed—so where’s the drama? Past the shop talk and the breathtaking vistas of a new frontier, it’s found in watching what Gosling’s Armstrong can endure within his self-contained four sides without falling apart (or exploding). And while it’s cheesy to suggest this, Chazelle also knows the truth: if no one in space can hear you scream, they can’t hear you cry either. So then, maybe his way works after all—we made the trip, didn’t we?