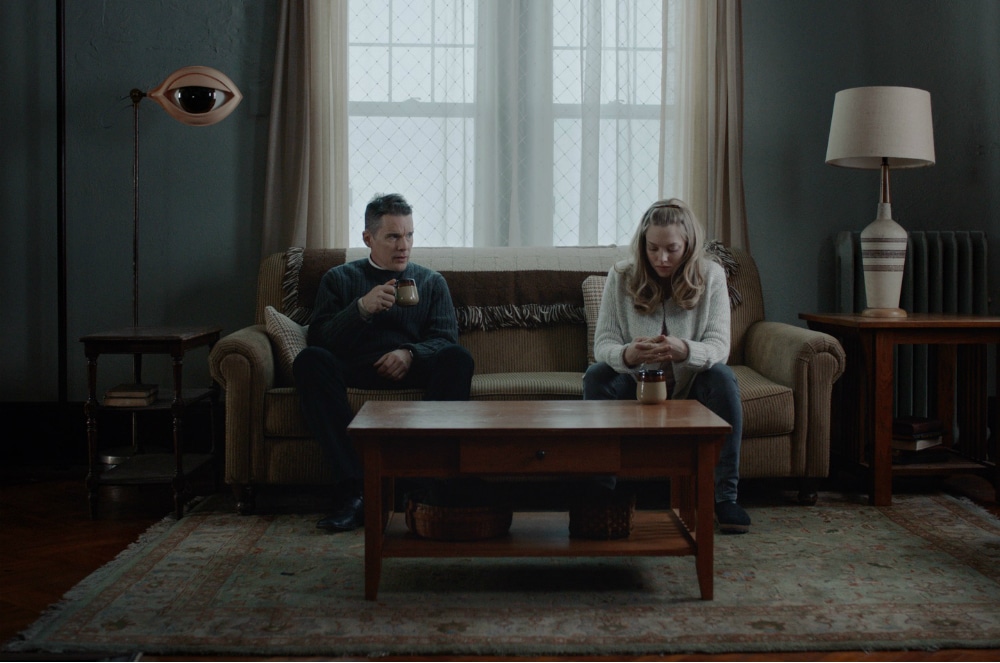 Approaching a recent film from Paul Schrader requires a leap of faith. After his heyday in the 70s and 80s, it’s been a few decades since he’s received widespread praise (see: 1997’s Affliction). There are a litany of reasons for this, not least of which are some of Schrader’s own artistic choices (see: The Canyons). Yet here we are in 2018 with First Reformed, starring Ethan Hawke. The film is written and directed by Schrader and, despite all of this history, comes on like a revelation.

Reverend Ernst Toller (Hawke), pastor of the titular upstate New York church, dutifully tends to his parish—a small flock that has seen better days. When pregnant congregant Mary (a wide-eyed Amanda Seyfried) asks the Reverend to speak with her husband Michael (Philip Ettinger), who’s struggling with depression, Toller jumps at the chance to do good. Except Michael’s despair proves to be more apocalyptic than the priest first realizes, which only feeds his own doubts and grief. Metered by narrated journal entries, Toller reflects on all of this as if on a trip of self-discovery. But as the outside world, be it Toller’s boss (Cedric “the Entertainer” Kyles) or his benefactor Balq (Michael Gaston) butts in, we’re left to wonder: is this a journey of self-deception instead? And, maybe, could these be one and the same? The film provides only contradictory and uneasy answers. What is easy to parse is Hawke’s performance, which is note-perfect in its modulation (and wounded strangulation). His Toller is a man trying very hard to maintain a hopeful exterior, like the white-painted panels of his church, while privately rotting apart. Hawke’s turn here is as excruciating as it is enthralling.

The star of First Reformed is still Schrader though. The action here may be minor (and miles away from the violence of his past films), and yet we feel a looming threat throughout. We also feel like we’re in good hands. Schrader’s withholding control lords over the entire film, reminding us of his credentials as an apostle of a certain type of crazed isolation (see: Taxi Driver). That quiet remove makes the film feel deceptively small, and yet it never shies away from the larger thorny issues it presents. Credit to Schrader then for brazenly taking that leap of faith himself—and for getting us to join in.