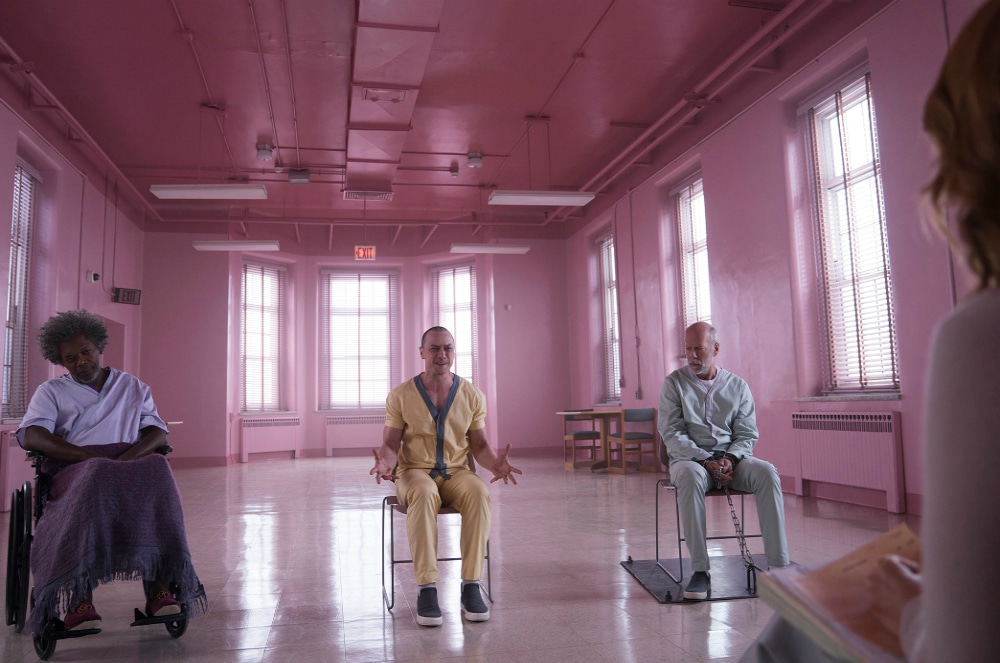 M. Night Shyamalan’s swerve into shared superhero cinematic universes should not surprise anyone. As the hit-maker of the early ’00s, he probably just feels left out. And why not—Shymalan’s got more talent than, say, Josh Trank. As if to prove it, his newest film Glass packs so many visual stunts, I half expected a “Yowza!” to pop out of the screen. The finished product here is indeed a solid audition tape; as an actual film, however, one straining against the delimited frames of a comic page, it’s not nearly as sharp as it thinks.

Built off the success of 2016’s Split and its tenuous link to Unbreakable, Glass unites all three leads to spin what Shyamalan presumes is an epic yarn. It’s a leap, considering he sets most of the film in a mental hospital, but the tedium of the film’s middle (and muddled) third is just its first problem. Problem two is far more intractable: as well as James McAvoy and Samuel L. Jackson bring multi-valent Kevin Crumb and calculating Mr. Glass to life, they’re still brutal villains, men who have killed hundreds of people. Glass spends most of its runtime with them, convincing us to invest in their plight—but why should we? That Bruce Willis’s stoic David Dunn, the ostensible hero, is locked out of sight for far too long only adds to this sense of misjudged focus. Which brings us to problem three: the film’s plot is overseen by Sarah Paulson’s Dr. Staple (get it?), who functions more as a narrative device than a person—and embodies the worst of what comics have to offer.

Now, the twist: I didn’t hate Glass. The film has touches of the old M. Night magic, mostly thanks to Jackson’s emoting and the sense of discovery in Willis’ modest performance. Few directors can conjure a mood like Shyamalan can, which is a talent more superhero movies could use. It’s enough to almost feel sorry for him having missed his chance to direct Fantastic Four or whatever. Still, true to his late-period form, and much like his characters, Shyamalan can’t help but be done in by his own fatal flaw: a sense of self-regard that borders on, well, the comical. No surprises there either.