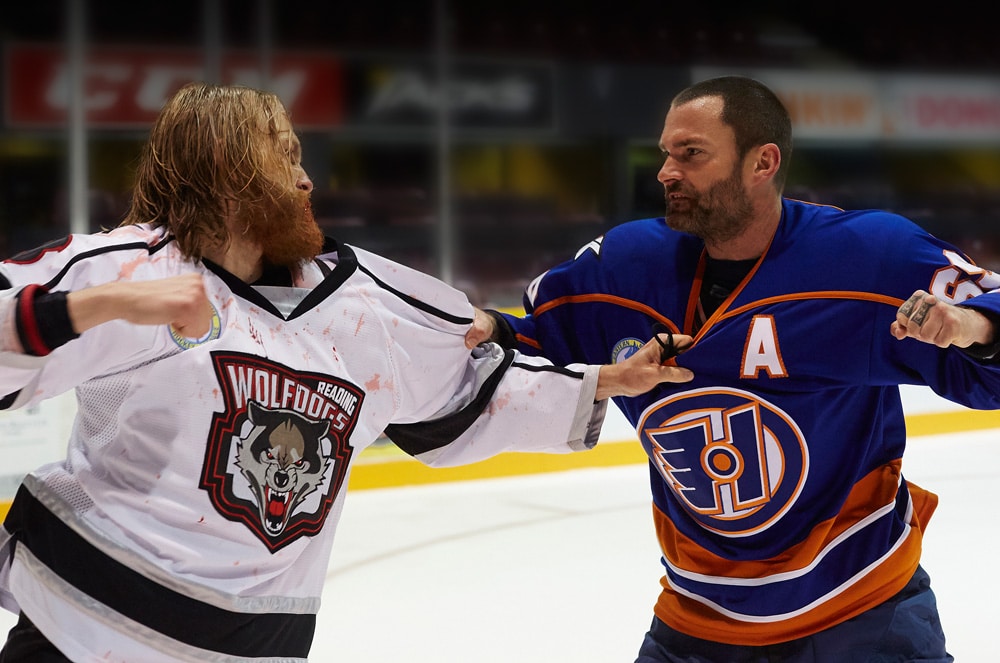 I’ll admit it – I didn’t like Goon. When I saw the Michael Dowse-directed film at TIFF 2011, I found the film to be unnecessarily raunchy and instantly forgettable. Brainless buffoon Doug “The Thug” Glatt’s rise from regular schmo to tough-guy defensive enforcer, as portrayed by American Pie‘s Seann William Scott, felt like a paint by numbers, sports movie. Now don’t get me wrong. As a proud, patriotic Canadian, I love a good hockey flick. Heck, I even found a lot to like in the critically castigated Score: A Hockey Musical. Now, years later, a sequel to Goon has come along, sans Dowse but directed by the original film’s supporting actor and co-writer, Jay Baruchel. Achieving what so few films have accomplished, Goon: Last of the Enforcers is a sequel that’s far better than its predecessor, with grislier action, well-rounded character development, and a lot more heart.

Five years later and not much has really changed since the events in Goon. Doug is still the go-to, rough ’em up player on the beloved Halifax Highlanders hockey team. Not long after he’s named Captain though, he gets viciously targeted and injured by rival goon Anders Cain (a very game Wyatt Russell, coiffed to look like Dad Kurt Russell, no doubt). With a baby on the way, Doug’s wife Eva (Alison Pill, the MVP of the film) urges him to trade in his blood-stained gloves for a desk job in insurance. Not willing to fully abandon his passion for brawling though, he sneaks off every night to train with his former nemesis Ross Rhea (Liev Schreiber), in a bid to get back to fighting form and return to his teammates (who are now being led by Cain).

Though the forays into Doug’s desk job feel episodic and almost like an extended joke only Baruchel and his buddies found hilarious (Office Space with a little auto-erotic asphyxiation, anyone?), the scenes on the rink are some of the best paced and directed fight sequences in a hockey film in decades. Baruchel is a life-long hockey fan and it shows. The riffs on the TSN broadcast (with real-life newscaster James Duthie spoofing his telecast alongside T.J. Miller) and the game play-by-play are spot-on. Giving increased screen time to the three stars of this “game”: former fiancée Pill, underrated comedic gem Elisha Cuthbert and Schreiber, seasoned actors giving their all to slightly underwritten roles, was ingenious of Baruchel as well.