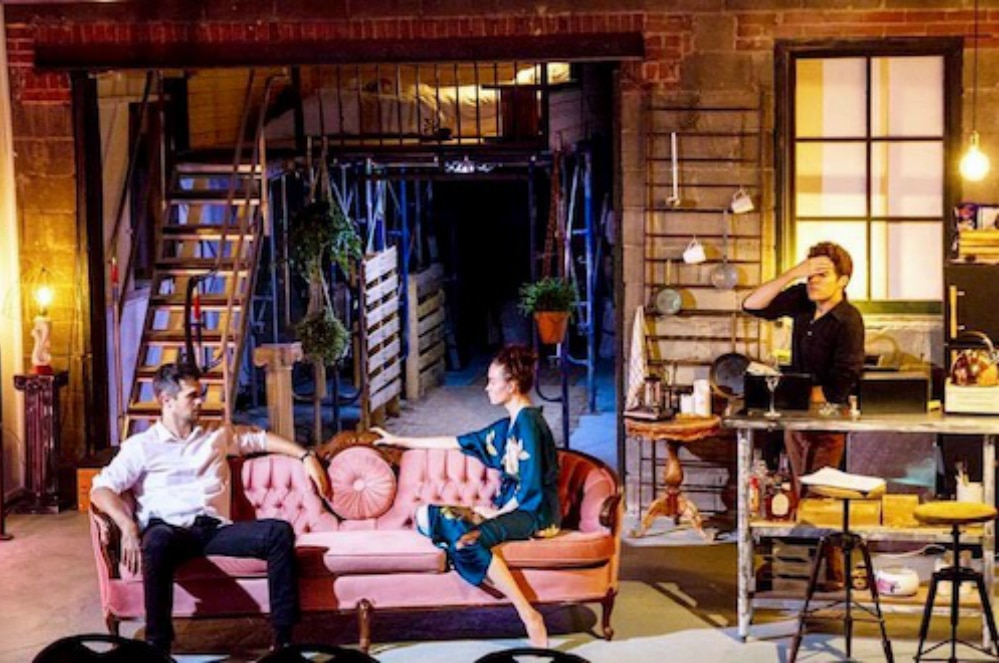 The experience of attending a performance of Lanford Wilson’s Burn This, as performed by Gracemoon Arts Theatre Company under the direction of Michele Lonsdale Smith, is beholden in the ability to engage the construction of the show on its own terms. For starters, the Gracemoon Arts Theatre Company has launched the production for its inaugural performance, rehearsed in Los Angeles, (much of the company is based in L.A.), and if one is wondering about Robbie’s Loft, it was constructed about a week and a half ago by the company. It is a set, a garage, a house, a stage, a lot of swirling elements. The temperature is a character, according to the artistic director (who by chance sat directly behind us at the performance, watching from the audience), and the night we attended (opening night), it was hot. The temperature in the room was elevated, and this is a steamy production, and the energy seeps into the audience, making for a site-specific cauldron. The performers are game to perform in a space without a dedicated backstage (or sidestage), and this performance begins with a dance recital by the lead character Anna. The long-limbed Elyse Levesque first appears as a dancer, as no words start the show, dances up a storm, and only then the play begins in earnest, meaning that Levesque is saddled with the exertion of the intensive start, which leads to the start of the show in which she does not exit the stage for almost all of Act One. Interestingly, the character has an expressive name, Anna, which I thought of as a palindrome, meaning that she starts and ends in the same place, in the round.

Her Anna is the central figure of the play, but surrounding her are three men, each bringing a personal sense of an experience to the show. Ben Lewis is the constant, mixing in and out of the scenes as Larry, the homosexual roommate, who to my surprise, slips in and out of the bathroom that was a functioning part of the theatre. In addition, Lewis carries the scent of the familiar, as a photograph on the wall captures the actor as Andy Warhol, and his face has a sense of the familiar and serves as the master of the house, so to speak. The set comes alive through simple lighting but carries with it a feeling of timeliness. Though the show is set in the 1980’s in New York, the actors frequently drink and eat throughout the show, and the appearance of Ruffles chips and Nielson milk serves to remove the show from its origins, (a joke about Canada early on seems to lend an extra level of irony).

This juxtaposition enhances the performances of Mark Stablein and Russell Sams as figures from the outside. Both of the supporting cast members are U.S. natives, (Levesque and Lewis were born in Canada, and are now based in America), and felt like the house belonged to them, and Stablein’s Burton and especially Sams’ Pale were outsiders. That Levesque and Lewis possess similar last names is a coincidence though ties them together. Robbie’s Loft (and the name is significant) is inflamed with the passions of the four and especially Anna who swirls through the middle in an attempt to capture a dance of a different sort. The actress is the slightest, and yet carries the authority of centrality. Once she removes herself, the set feels barren, lifeless, but when she returns the house almost starts to feel suffocating. The show is a marriage of form meets function and kudos to the director, cast, and audience for agreeing to share the space.

This show doesn’t feel complete without a talk back, and J.R. Bourne led a spirited one, and others will do so throughout the run. In a bit of a surprise, I felt like the talk back for this performance removed a layer of intimacy and I felt as though the talk back needs to feel confrontational, aggressive, almost suffocating, quite like the show itself. To observe small aspects of the show, (a scene of Larry listing the names of tea recalled Scott Pilgrim Vs. The World, which Lewis also appeared in, also in the facade of a house), was the type of talk back I felt would have worked better. I wanted to stay within the confines of a blurred reality, rather to escape from it, even though it was an at times unpleasant and a semi-immersive experience.

Burn This runs from July 19th-30th at Robbie’s Loft on 190 McCaul St. in Toronto. Limited tickets are still available with talk backs every night of the run.