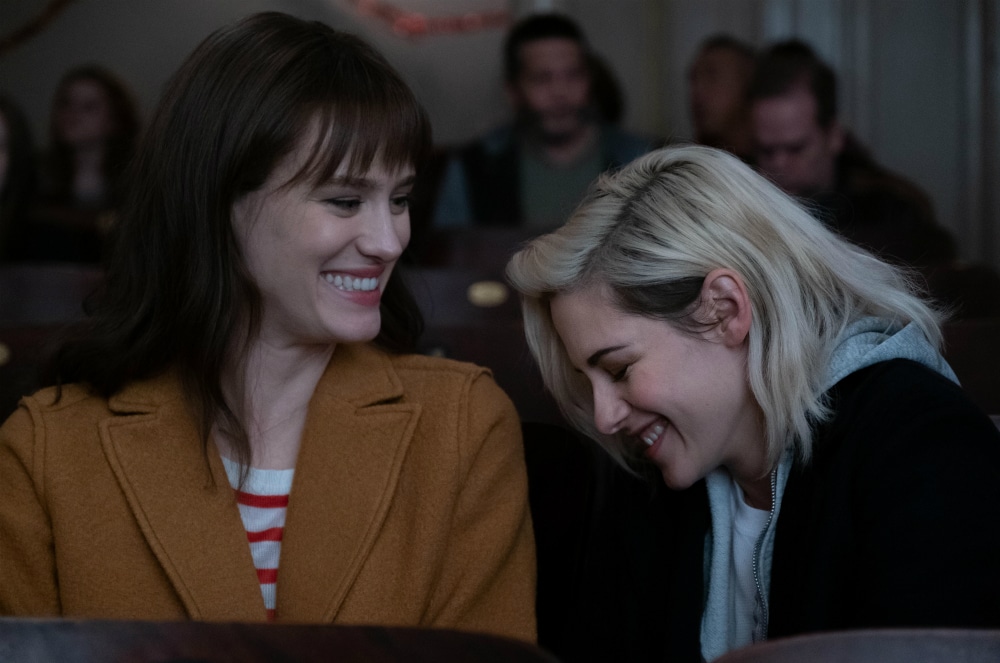 We first have to acknowledge the formula at work in writer-director Clea DuVall’s Happiest Season. As co-written with Mary Holland, there’s no way to watch this film and not predict the tumult and humour to come. Not only is this a romantic comedy, which has its own set of rules; it’s also a film set during the Christmas holidays, which requires the overlay of additional well-established structure. The final film should all feel rather constricting, and yet: it’s mostly not.

The enlivening twist, if we can call it that, is simple: Happiest Season‘s central romance is between two women, something not often (or ever?) seen in typical Hallmark-brand (or otherwise) holiday formula films. In this scenario, Harper (Mackenzie Davis) wants to introduce her partner Abby (Kristen Stewart, the film’s, ahem, “straight man”) to her small-town family, including her mayor-hopeful father (Victor Garber), tightly-wound mother (Mary Steenburgen), and two sisters (Alison Brie and Holland again, one of the film’s standouts). As you can imagine from the cast list, that’s the other component separating this film from typical Christmas movie drek: star talent. These are actors who know how to work a scene, a line, and a joke—and that’s before we even get to Dan Levy’s scene-stealing turn as the best friend. Once they all get moving through the upstairs-downstairs action of the plot (however formulaic it ultimately turns out to be), it’s hard not to be charmed. And rather than be concerned only with matters of farce, DuVall’s film also has time for proud statements on sexual identity, acceptance, and—as per the season—familial love. I can admit I was caught up by it all.

Still, this is all standard stuff, and DuVall’s filmmaking ability doesn’t do anything new with the material. It’s perhaps also worth noting the film’s narrow portrayal of LGBTQ people and issues, e.g. exclusively white, attractive, and affluent. But the movie remains true to what it’s about. And while it may only be a small step, it’s an entertaining one—taken in a positive direction.