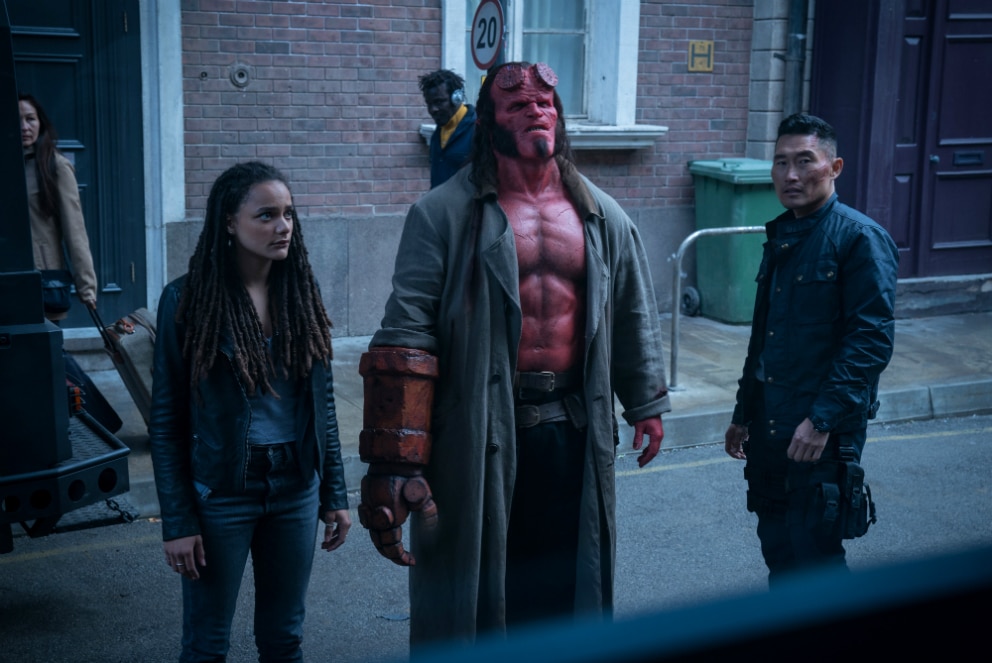 To assure its audience this is not your father’s (re: Guillermo Del Toro’s) Hellboy, director Neil Marshall’s new take on the character opens with a hard-edged voiceover from Ian McShane. He plays Professor Bloom, the father of Hellboy, leaving little room for confusion as to the direction the proceedings will take. True to form, McShane lets fly with the profanity almost immediately; and, as expected, the film wastes no time getting to the gore. What this is all supposed to be in service to, however, is far more bewildering.

The film’s plot, such as it is, involves the evil Blood Queen (Milla Jovovich), her thirst for revenge, and global domination. Naturally, Hellboy (David Harbour) must stop her. As required by the script from Andrew Cosby, he and his supernatural helpers, Alice (Sasha Lane, blandly British) and Daimio (Daniel Dae Kim, inexplicably British), are dispatched to fight a series of monsters on the way to that final confrontation. In describing some of the film’s component parts—a brawl with Baba Yaga, secret society machinations involving giants, a cameo by Lobster Johnson (Thomas Hayden Church)—it almost sounds fun. But there are also far too many components here. What’s more, while Hellboy uses the general beats of the character’s mythos, it dismisses much of the source material’s tone. Instead of a bemused dark fairytale, it steers straight into heavy metal horror, layering on an unnecessary Arthurian legend to boot. Everything is clumsily mashed together, crashing towards a noisy conclusion that is as inevitable as it is impossible to care about.

It’s true, once Hellboy introduces King Arthur in its prologue it’s hard not to guess exactly where the film will end up. And since the poor lug just gets thrown into one action scene after another with little rhyme or reason—and with even less budget and imagination—no amount of emoting from Harbour, doing his best, can get us to buy in. Now, I understand the desire to differentiate this film from the Del Toro originals, and from the comic book too, but that begs the unholy question: why make a new Hellboy movie at all? Or to put it in this film’s terms: WTF?