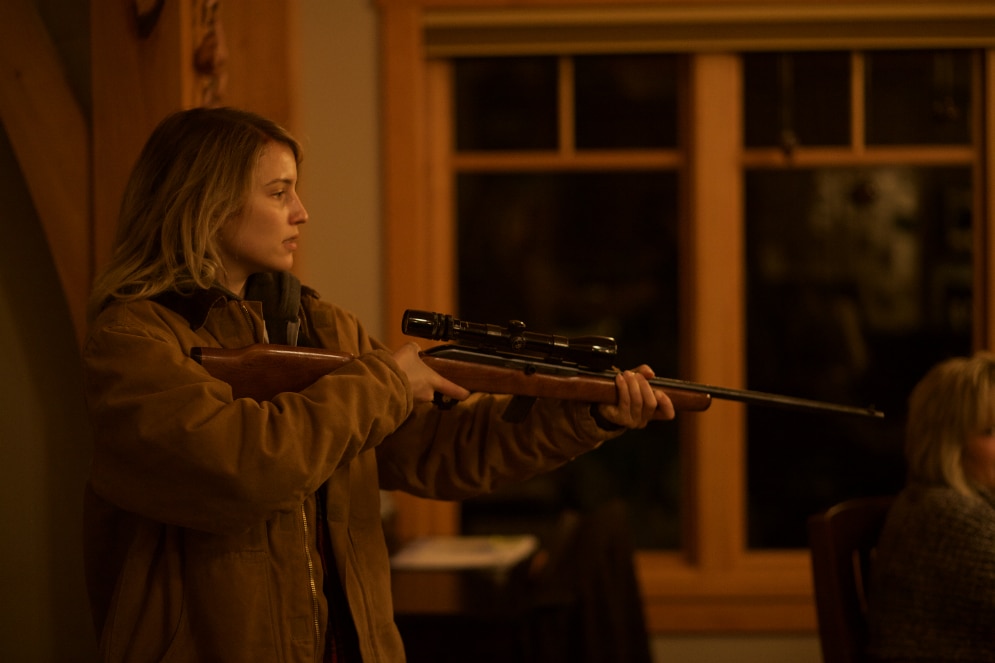 To hear Hollow In The Land tell it, everyone in small-town Canada is pissed off. Frankly, who can blame them? Making his debut feature, writer/director Scooter Corkle imagines a British Columbia town overrun with shady characters, reams of painful history, and yes, overflowing founts of anger. It’s not a stretch to believe this town exists, but it is a bit of a chore to watch a movie about one.

The film begins on siblings Alison (Dianna Agron, Glee) and Brandon Miller (Jared Abrahamson, Hello Destroyer), whose unseen father is already in jail as the town’s most notorious criminal. Since Brandon seems hellbent on following him into lockup, and Alison is low-key gay, logic dictates the townsfolk object to the entire family. Things get even worse when Brandon flees a murder scene involving his girlfriend’s father, and overworked Alison is left to figure out whodunit. It’s a mystery that quickly involves everyone around, including punk drug dealers, petty teens, the town’s rich family, and stalwarts Shawn Ashmore and Michael Rogers as the good and bad cop, respectively. The film does bump against some fresher ideas regarding same-sex relationships in tiny communities, marijuana growers, and the role alcohol seems to play in everyone’s life—but mostly it’s just scene after scene of attrition. While there is something to Agron’s aggrieved performance, and at least one noteworthy night-shot sequence, eventually the film feels squeezed of any real life.

Comparisons to Winter’s Bone feel almost too obvious here—what with a young blonde daughter paying for the sins of her father. I thought instead of In the Heat of the Night; it’s worlds apart tonally and culturally, sure, but marked by the same stewed passions and unease. The major difference of course (quality aside) is a matter of subtext. While Norman Jewison’s classic navigates race relations in the southern U.S., here there’s only beleaguered family drama. The criminal motive turns out to be just as ridiculous in both films, but at least In the Heat of the Night has a grander point to make. In Hollow in the Land, the returns stay like the town and, unfortunately, its people: small.