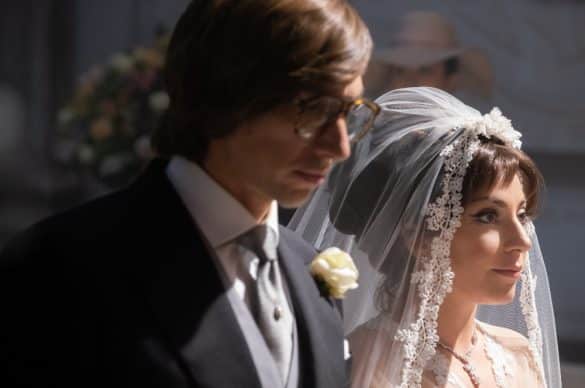 To look at director Ridley Scott’s House of Gucci for just a second is to be struck by the glamour on display. In any one moment, there are famous movie stars, jet-set locations, and, of course, the eponymous fashion coating every frame. But to watch it for a minute is to detect something off. That’s when the phrase “white elephant art” comes to mind—or more fittingly given the film’s desire to be Italian: arte dell’elefante bianco.

Setting seconds and minutes aside, House of Gucci runs well over two hours, which simply won’t do. Inspired by the true story, as written by Becky Johnston and Roberto Bentivegna, the film is in fact quick to introduce us to its two main players, Maurizio Gucci (Adam Driver) and his wife-to-be Patrizia Reggiani (Lady Gaga). But despite some fun and frivolity with them in the first third, Scott’s film eventually settles into a dull procedural mode, welcoming more of the Gucci family (Al Pacino and Jared Leto, goofy and goofier) and taking us through the various betrayals and business deals that produced the modern-day Gucci empire. If one cares about this story, maybe it beats reading a book; however, it’s astounding how flat much of this film is—even as it strains for silly excess. To a certain extent, the film’s problems become pronounced as Gaga’s Patrizia turns to criminality, but really the issues are more deeply threaded than just her central performance. To bring it back to units of time: every scene feels too long, too shapeless, too concerned with detail yet somehow not tight enough to drive the film’s narrative forward.

A film like The Wolf of Wall Street offers a great example of how to make an entertaining film about abject people doing various awful things. What’s needed to make it work? Energy, a sense of zipping purpose that goes beyond just documenting the whos and hows of what happened to said people. House of Gucci does not have it, and no amount of dressing can cover all that plodding.