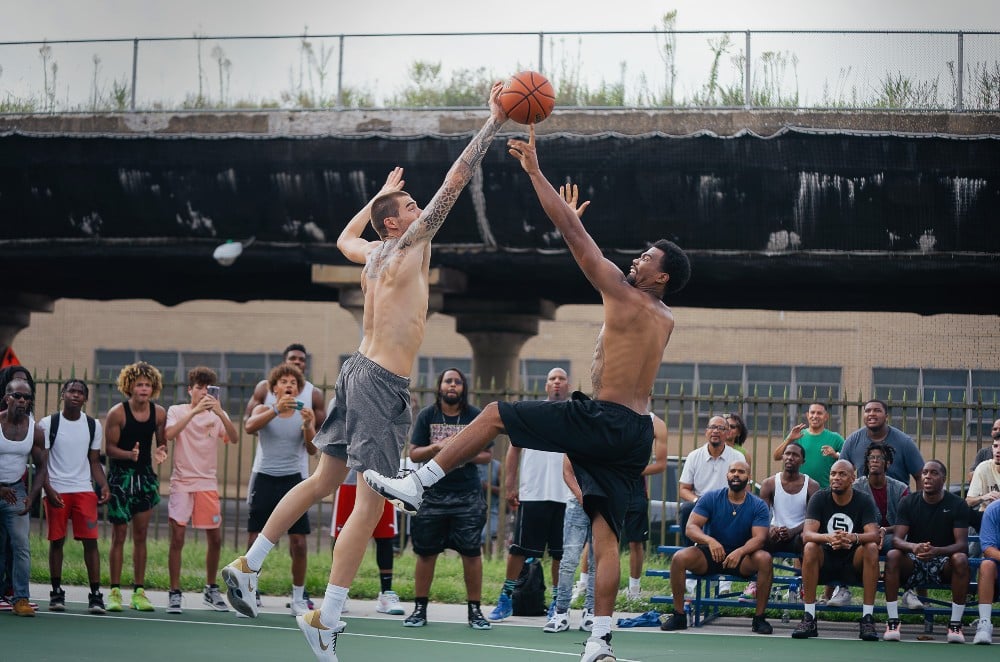 Much like the aspiring basketball star at its centre, Hustle just keeps working hard—through its plot, on its audience, and towards its happy end. Smoothly directed by Jeremiah Zagar, this is a sports movie that knows quite well it’s a sports movie. That it doesn’t strive for much more than that is fair. Even with LeBron James involved as one of its producers, not every film can be an all-timer.

Despite cameos from many famous basketball players, coaches, and media members, Hustle‘s central figure is actually former first-round pick (and current NBAer) Juancho Hernangomez. The 26-year-old Spaniard plays Bo Cruz, a talented nobody hustling hoops on the side until he meets Stanley Sugerman (Adam Sandler), an exiled scout looking to get off the road for good. Standing in as his golden ticket, Sugerman brings Bo to America looking to get them both into NBA arenas. The appeal of the film’s setup to that point is obvious, with the capable Sandler working a few levels below his Uncut Gems fever pitch to deliver a solid performance as a rags-to-riches underdog story writes itself around him. (No disrespect to co-writers Will Fetters and Taylor Materne—they surely know what they have here too.) Hernangomez chips in a credible enough acting turn as well, but more importantly: we believe he can play high-level basketball. When the film’s eventual training montages get going—a must for any rousing sports movie—it doesn’t take much to convince us Bo should get his chance to make it.

That air of legitimacy around Hustle is its greatest strength, overcoming a few of its more rote or absurd narrative developments. When one part falls short (e.g. a top prospect played by Anthony Edwards using the NBA Combine to show out), the action around that beat makes up for it (and besides, Edwards plays a great on-court villain). To make one more hoops metaphor: this film doesn’t split many double teams, but it doesn’t have to. The open shot is right there.

Enter for your chance to win advance screening passes to Disney and Pixar’s Lightyear!