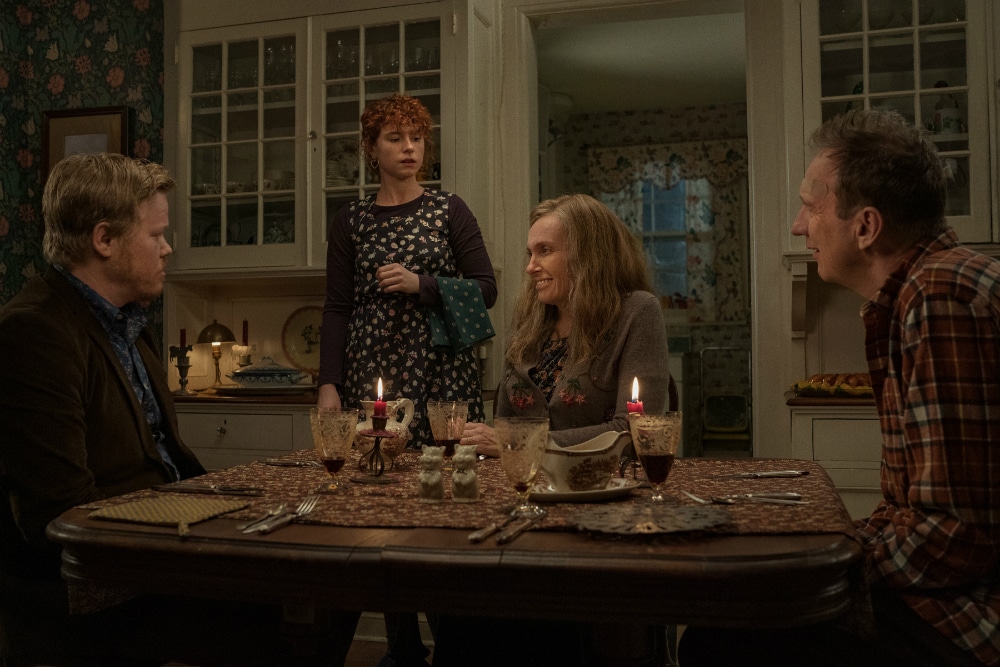 I’ve yet to meet someone who didn’t at least respect Charlie Kaufman as the writer of Adaptation and Eternal Sunshine of the Spotless Mind. Maybe the most memorable qualities of those films belong to others, but it’s Kaufman’s writing that makes them tick, moving us in bizarre—yet recognizable—directions. That sense of shared discovery is significant, even as Kaufman burrows deeper into existential despair. It’s where I’m at with his latest directorial effort, I’m Thinking of Ending Things. It’s a film not so easy to enjoy, if only because we see too much of ourselves in it.

Based on the confounding book by Iain Reid, I’m Thinking of Ending Things regards a young woman (Jessie Buckley) as she narrates a trip to the country to meet her boyfriend Jake’s parents at their snowy farm. It’s a deceptively simple premise, with much of the film’s action taking place in a car and small house. But Jake and his family are played by Jesse Plemons, Toni Collette, and David Thewlis—who combine to generate waves of awkward energy—and Kaufman, with help from editor Robert Frazen, moves them around these tiny spaces (and in time) with unexpected vigour. What we’re meant to take away is often startling in its clarity, with Kaufman tackling everything from relationships, familial bonds, personal identity, ageing, and, of course, death. Taken altogether, however, his film can often overwhelm, or go a tad too far in its efforts to discombobulate. Still, the actors are all marvellous, and as with Kaufman’s other films, there’s nothing else quite like it.

My appreciation of I’m Thinking of Ending Things is tempered, ultimately, but my inability to ride out each of its strange oscillations. This may make it extra special to some. For me, getting a handle on one surreal twist only to have Kaufman introduce another had me feeling—like the young woman at the centre of the film (or is she?)—just too lost. Maybe that’s indeed life. If nothing else, I can respect Kaufman’s opinion.