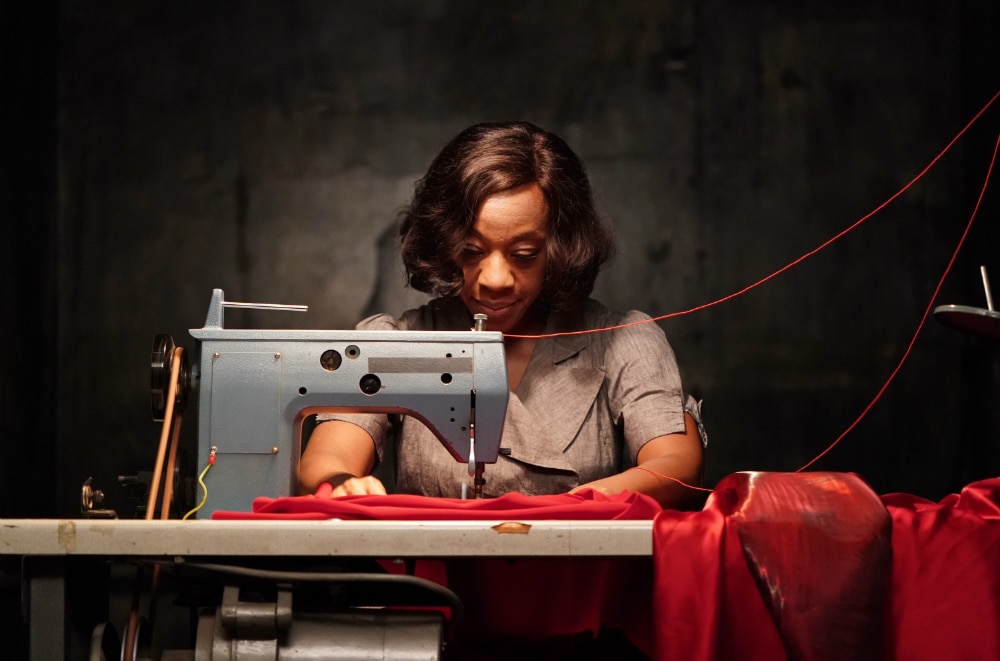 If nothing else, the films of writer-director Peter Strickland feel beamed in from a different time—and dimension. In describing his latest, In Fabric, there are components and feelings we recognize, yet the overall experience is wholly alien by design. Just when it seems like the film may be travelling in a direction we can foresee, off it veers somewhere else. One can only hang on in shock or be left behind.

Despite this discombobulation, there are obvious merits to In Fabric. The film functions as a ghost story, a tale through time wrapped around a red dress that changes hands and ruins lives in the process. We begin with Sheila (Marianne Jean-Baptiste), a single mother with a young adult son, Vince (Jaygann Ayeh). She buys the dress from a singularly strange department store and suffers one injury after another—both physical and psychological—for daring to wear it. The dress eventually moves on to Reg (Leo Bill) and Babs (Hayley Squires), a couple soon to marry, and the cycle repeats itself in a different way. Throughout these machinations, the film returns to that store, staffed by Miss Luckmoore (Fatma Mohamed, a favourite of Strickland’s), the setting for a bizarre collage of sounds and images. There’s the whiff of an idea here about the forces of consumerism and how they dominate our lives. Or, as in The Duke of Burgundy, Strickland is once again exploring the forbidden corners of passion, obsession, and more, as sublimated through his particular lens. It’s something to look at, in any case.

That the definition of In Fabric is rather gauzy feeds into the discomfort it produces. A different (perhaps less accomplished) version of this film could easily present the story of the haunted dress and the pain it inflicts on its wearers. Strickland’s approach, making the so-called “normal world” weirder still than the film’s supernatural elements, takes guts. As with any challenge to aesthetics, however, the final effect is in the eye of the beholder. For me, I’m just not sure I see it.