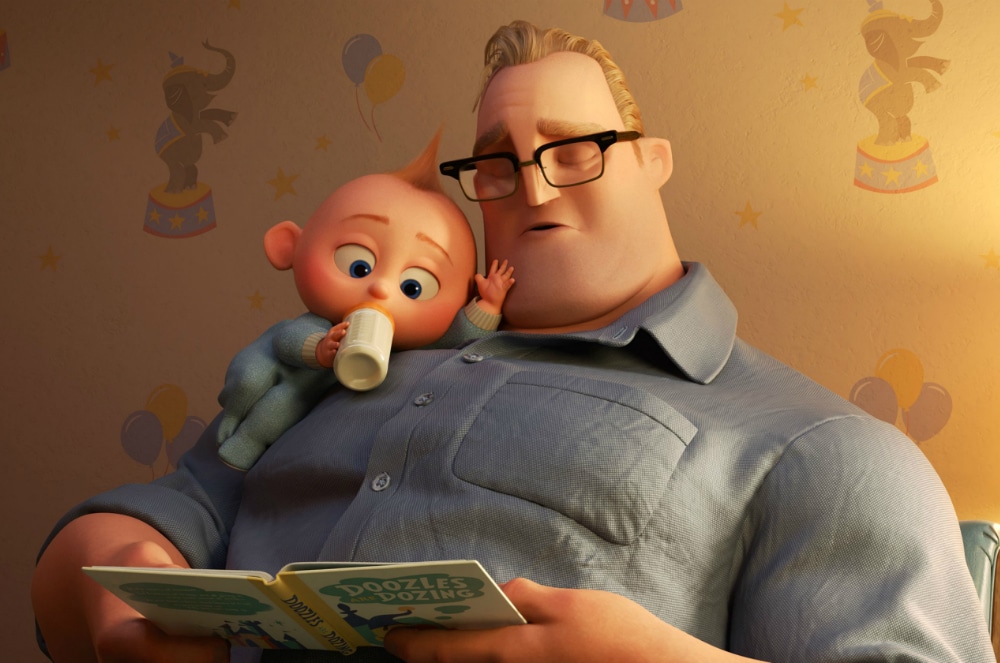 I feel bad for Brad Bird. The wunderkind writer-director decided a decade ago to take a swing and make some live action features with huge movie stars. Except, it didn’t quite take. Mission Impossible: Ghost Protocol was solid, but Bird’s grand return to Disney produced the soggy Tomorrowland, while the long-gestating 1906 has yet to gain traction. So he’s been steered back to animation, not necessarily the worst thing. If only Bird’s (and Pixar’s) talents weren’t being wasted on sequels like Incredibles 2.

After 14 (real world) years away, the lovable Parr family are back. We’ve moved into the Watchmen phase of their careers though: superheroes are illegal. Fortunately, their world is not that dark, and the legislation barely slows the family down. With help from DevTech, headed by siblings Winston (Bob Odenkirk, good) and Evelyn (Catherine Keener, too good), Bob/Mr. Incredible (Craig T. Nelson), Helen/Elastigirl (Holly Hunter), Violet (Sarah Vowell), and Dash (Huck Milner) are crime-fighting again in no time. (Samuel L. Jackson also ably slides in as Lucius/Frozone.) What’s surprising here isn’t the return of vibrant and inventive action scenes, but how much of the film isn’t that. In fact, Incredibles 2 has equal time for baby jokes (Jack-Jack is cute, but too much), more Edna Mode (Bird again), and even a whole gang of other superheroes (walking punchlines). There’s a lot to get to, and the film does get to it—except not everything feels like the same movie. And the villain, the mysterious Screenslaver, feels of a different piece entirely.

As a result, poor Bird ends up stretching himself thinner than Elastigirl. His Incredibles 2 is about family gender roles and child-rearing, and it’s a coming-of-age story, and it’s also about the dangers of nostalgia, and digital screens, and our over-reliance on convenient experiences. (It takes a crack at Congress too.) But the film cynically weaponizes all of this while still rooting for the status quo. No one in this world can seem to get anything done except the superheroes (oh, plus the tech wizards and secret G-men). It’s sweet the family is together and all, but the cognitive dissonance hit me like a punch from Mr. Incredible. What is being sold here, and to whom?