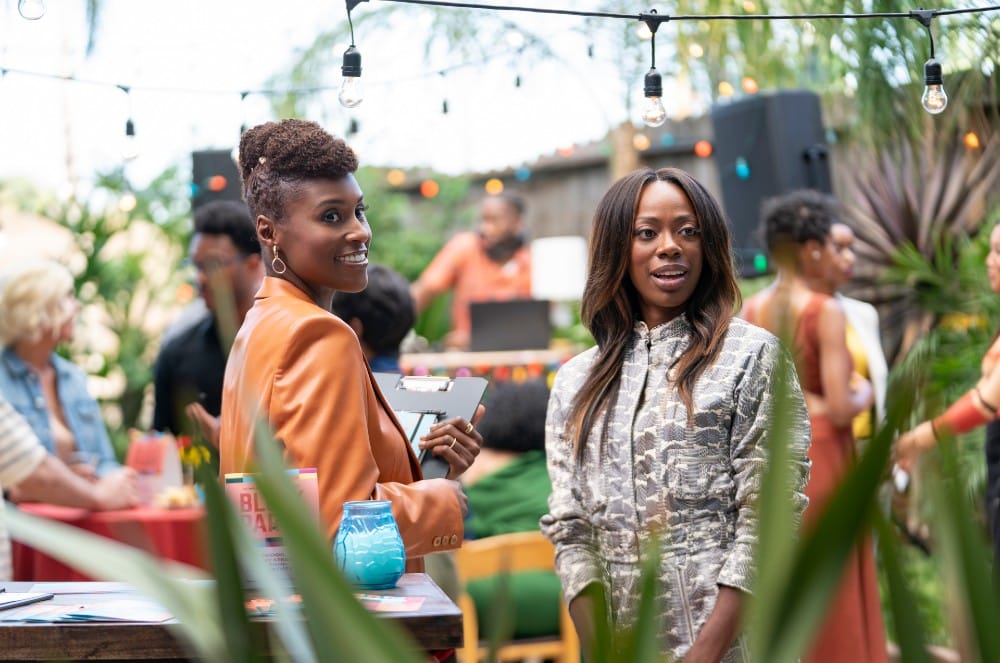 HBO’s Insecure, now entering its fourth season, understands its strengths. As shaped by series creator and star Issa Rae (with Larry Wilmore), it’s at its best putting its characters into a series of interlocking triangles, one vertex connecting to the next. This may sound obvious—go figure, a TV show needs interpersonal conflict to work—but it’s worth mentioning here. When Season 4 (through five episodes made available to critics) finds new angles, it excels. Unfortunately, much of the show’s latest developments often arrive at the same point.

Picking up where the show left off, Issa (Rae) is planning her block party; Molly (Yvonne Orji) is working too hard and navigating a relationship with Andrew (Alexander Hodge); and Lawrence (Jay Ellis) continues to just hang around. That last presence generates the season’s first strong pivot when Issa discovers that her new friend Condola (Christina Elmore) is now dating her ex, putting their mutual planning work in jeopardy. Elsewhere, it’s refreshing to see Molly’s drama eschew the messiness of earlier seasons to focus on more relatable intimacy issues. But don’t worry, there’s still mess in Insecure. There has to be, particularly between Issa and Molly, who find themselves somehow at odds once again. While there’s an argument to be made for this dynamic being the crux of the show, I couldn’t help but wonder why these two were friends at all anymore. Let’s watch Issa deal with Lawrence, or manage her rowdy tenants, or even enjoy her goofy brief relationship with an enthusiastic plus-sized TSA agent. That’s fun and surprisingly involving stuff.

Despite Issa’s introductory insistence that she no longer “fucks” with Molly, a sentiment preceding the show’s six-month flashback structure, we know we’re about to see exactly how she still does. Except the suspense just isn’t there. Instead, it feels like we’ve seen this all before on Insecure, the show’s will-they-or-won’t-they tension becoming more tedious than inspiring. So, while in character Issa wants to promote Black excellence, Rae only actually does so sometimes as the show’s creator. By now, she should be secure enough to try something else.