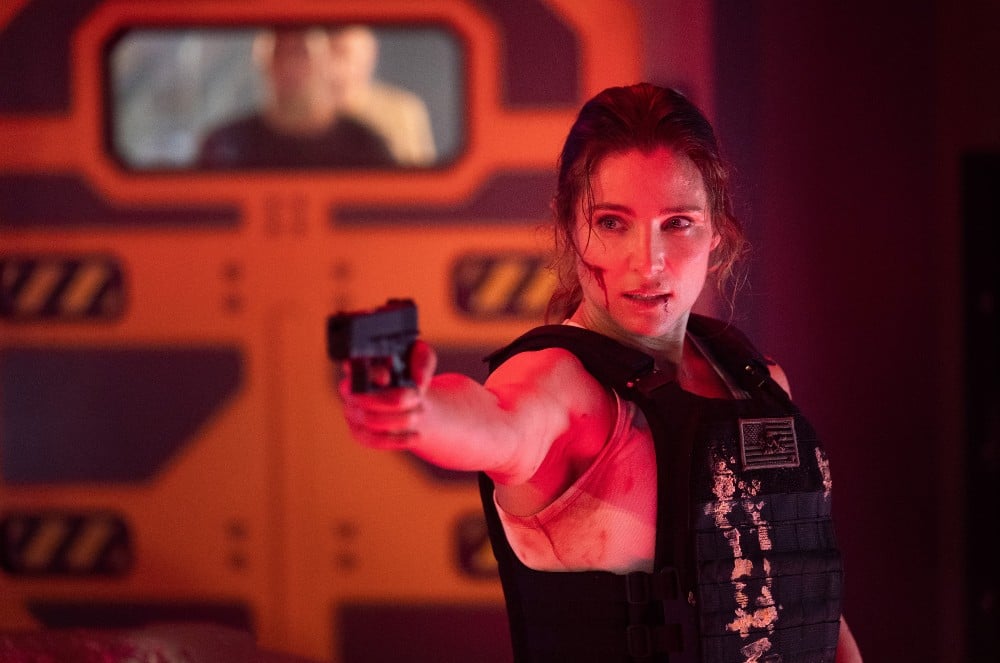 If you’ve heard of Interceptor, directed by Matthew Reilly and built around the “talents” of star Elsa Pataky, it’s because Chris Hemsworth is one of the film’s executive producers. He also makes a goofy cameo, which is surprising since most of the film is set in one place. That geographical constraint almost suggests a clever conceit at work. Believe me, however, there is nothing clever here.

Co-written with Stuart Beattie, Reilly presents Interceptor as something of a B-movie action throwback—that just so happens to be filled with riffs on cultural topics of the day. We open with Pataky as JJ Collins, a seemingly disgraced captain now exiled to SBX-1, a lonely sea platform capable of shooting down a nuclear attack. As you could guess, that’s just what’s needed here when evil intelligence officer Alexander Kessel (Luke Bracey) pops up with a squadron of goons to disarm the base so his comrades can destroy the United States. Heavy stuff. What emerges is a Panic Room-lite scenario in which Collins must defend the room she’s in, which is also the one place the bad guys want to be. Along the way, we learn about what happened to Collins and her military career, and Pataky gets tossed through a few punching-and-kicking scenes that do not look or feel believable. Meanwhile, though the film’s plot is entirely predictable, it almost surprises with just exactly how predictable it is. Finally, it’s clear Reilly and Beattie think they’re splitting the atom with their overlay of gender, race, and class commentary here, but they’re mostly perpetuating stereotypes as quickly as they claim to be refuting them.

If there’s a happy ending to Interceptor, aside from the good guys coming out on top after a surprising amount of bloodshed, it’s that Pataky also happens to be Hemsworth’s wife. It’s not impossible then to read this entire endeavour as something sweet, a gift of support from a loving spouse who also happens to be a huge movie star. Yes, let’s just end there: not impossible.