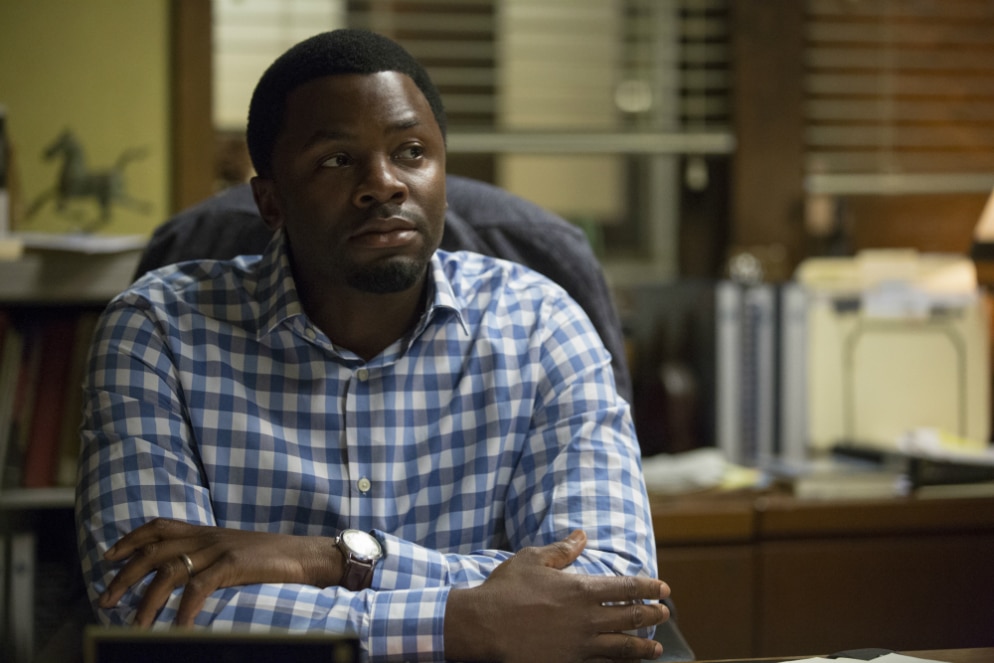 In this season of 13 Reasons Why, Liberty High guidance counsellor Mr. Porter encapsulates the “be the change you wish to see in the world” mantra. In a bravura performance, actor Derek Luke’s portrayal of the guilt-ridden counsellor who didn’t take Hannah Baker (Katherine Langford)’s admissions of suicidal thoughts and rape seriously enough last season, his character undergoes the most positive transformation this year. No spoilers, but you’ll definitely be moved to tears and passionately advocating for a much deserved Emmy nomination for the talented actor by the end of episode 9.

We had the wonderful opportunity to chat with Derek Luke on the phone last week where he spoke about his admiration of co-stars Katherine Langford and Alisha Boe, and the lessons he learned from previous colleagues (including Spike Lee, Viola Davis and frequent co-star Denzel Washington). The following is a condensed and edited version of that introspective conversation.

Brief Take: What did you like best about this season of 13 Reasons Why?

Derek Luke: You know what, there’s great writing and I like real life stories, which is why I love 13 Reasons Why. It’s cool because not just the teenagers but the teachers’ voices are being heard in a different way this season and on the show overall.

Brief Take: On this season in particular, your Mr. Porter is a positive role model and positive example to the kids at Liberty High. Who are some of your role models?

DL: You know lately I’ve been quoting Booker T. Washington because I’ve become involved in a program for troubled youth and, having been in those centres, there’s a real excitement and you see people as they are. Everybody has a story. I think the writers and the producers have done a great job addressing what people deal with on a day to day basis.

Brief Take: There’s been a lot of unfair criticism towards the show but there’s also been an outpouring of love as well. What sort of fan reactions have you received since the first season began streaming?

DL: [laughs] I got some very surprising reactions. You know from the work that I’ve done, from Antwone Fisher to 13 Reasons Why, I get people saying, “man, I like you as an actor”, but then they’ll go, “you know I saw you on 13 Reasons Why and I did not want to like you there, but you’re so likeable”. But you know on the page, it wasn’t necessarily written, in my eyes, that I’m an unlikeable guy. But what’s interesting is that a lot of teens have come up to me and spoken to me and have started conversations as a result. I don’t think a lot of teens have had an outlet to address a teacher, for example, or an adult, or even other teens.

Brief Take: I’ve spoken to a few of the 13 Reasons Why cast members now and they all say that the ensemble is like a tight-knit family.

BT: A large portion of your scenes are with Katherine Langford, both in season one and two. What has your experience been like working with her?

DL: Oh I totally adore Katherine. Her and Alisha [Boe] remind me of my nieces. What I love about them is seeing them express themselves through their characters. Katherine is just a princess to me. Every time that I see her and the layers that she brings to her character, I’m in awe of her and applaud her. I think it’s a beautiful cast overall, both inside and out, and I applaud them all for the work that they put in.

BT: Earlier in your career you got to work with luminaries such as Spike Lee, Denzel Washington and Viola Davis. What lessons did you learn from them that you’re perhaps passing on now to the young cast members of 13 Reasons Why?

DL: Be honest. Be truthful.

13 Reasons Why seasons one and two are now streaming on Netflix. For help finding crisis resources, visit 13ReasonsWhy.info