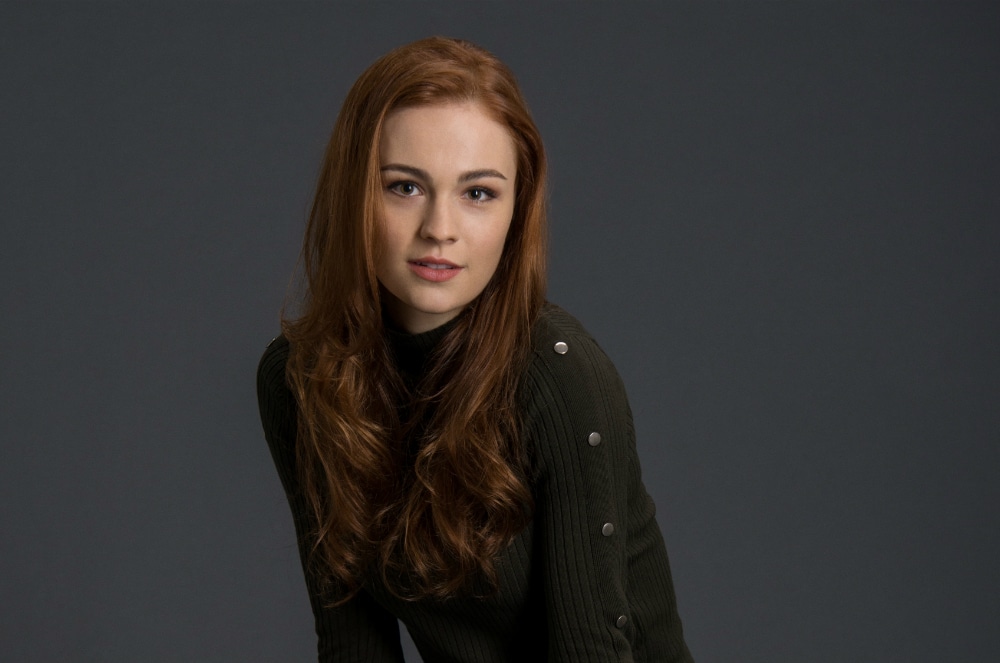 British actress Sophie Skelton is a really amazing person, so it was a pleasure to discuss the exceptional work that she is doing in the new movie 211, co-starring Nicolas Cage as the father of her character Lisa MacAvoy. She is also in a little TV show called Outlander, where she is confirmed to be returning in the upcoming season 4 as American Brianna Randall Fraser (and she revealed that although she has never been to Canada, one of the upcoming directors this season is Canadian).

We spoke to Skelton by phone recently and here is an edited and condensed version of our interview.

Brief Take: What was it like playing Nicolas Cage’s daughter in 211?

Sophie Skelton: It was cool. It’s quite nice actually because his character is quite reserved. It ties very nicely in the story because we’re both stubborn and take after each other, and yet we have quite an estranged relationship. They really don’t talk to each other. But then we see them together, nearly at the end of the movie, the bad blood between them evaporates and they have this really lovely father-daughter moment where they both let their guards down to each other, which is really nice. I think it’s great that it’s not just your standard action movie. It’s based on a true story, but it’s nice that you’re not just seeing it from the victim’s point of view, or the cops’ point of view, or the robbers’ point of view, you’re actually seeing someone like Lisa, who is kind of an indirect victim, she’s so physically removed from it all, so emotionally involved in it, so I think that it’s really great to see it through Lisa’s eyes, because you do feel that sort of helplessness of that person at home waiting for you. We took the real event and made it slightly more modern day. Obviously, the bank robbery is ’97, but elements like Michael Rainey Jr.’s character with his phone, and how things can just spread so quickly, with Twitter or social media, how that helps or hinders the situation.

Brief Take: Speaking of which, you’re very passionate on your social media channels advocating for people living with Crohn’s and Colitis and also IBS.

SS: While I do think that social media has caused certain problems, it is also a great thing in that you can spread the word and you can make people feel less alone in some ways. It has been really heartwarming to see that when you tweet about Crohn’s and Colitis or any IBD or IBS problems, the amount of people who have suffered with it and that outpour of emotion where they said that they felt so alone until they saw the tweets and saw that information. It’s one of those things that can be really be brushed off by doctors because they definitely don’t know enough about it now. It’s just very easy to say, “hey, you don’t see this, you don’t see that”, it’s different for everyone and it’s sort of an individual problem. So yeah, I think for that, social media is a wonderful tool to spread awareness about IBS, to just help people in this tiny way so that they don’t feel alone and suffer. It offers a bit of comfort and a bit of advice to people, which means a lot.

BT: What you can tell me about the upcoming season of Outlander?

SS: We see Brianna go back in time to the kind of carefree ’70’s, and then we see the juxtaposition of the 1800’s, how that’s really different for Brianna. In the beginning, with losing her Mum, she sort of just became an orphan. She went from having two parents, to three, to none. And then she finds out some information about her parents and decides to go back in time to save their lives and change the course of history, and she sort of gets caught up in the American Revolution, just the corruption of the times. It’s good because then the show addresses a very relevant topic and things happen to Brianna that are in the media right now, just in terms of the modern day version of what happens to Bree. So hopefully again it will be one of those things that helps victims of abuse and seeing it through a character’s eyes again will allow people to have more empathy to go through what Brianna goes through, but also helps victims too. But it’s interesting because you do see a modern woman out of her time dealing with problems that she wouldn’t even see in her day.

BT: Why do you think Outlander resonates so much with such a wide audience?

SS: I think it’s so important because it’s a female-led show and it shows the strength of a modern day woman out of her time. When Claire’s character starts in the war, that’s when women really did step up and become part of the work force. When the soldiers were away, the women became the work force, and I think that that was a really strong period of history. I think that what’s so great about the show in terms of its message, is that you have so many cultures colliding and so many races colliding, people from different walks of life. I think that there is a lot of nudity and there is some violence in this season as well, but none of it is there for gratuitous reasons or just for the sake of being explicit. It’s all things that happened in the time, people were a lot more liberal with their bodies and people were more violent and they do more openly criminal things, and so I think it’s great not to bury those things in history. So I think that this season in particular addresses America becoming America; it’s the New World and a wonderful thing to see all these people from different countries coming together as one.

BT: What time period would you travel back to if given the opportunity?

SS: I think I would travel back to the prohibition-era of the ’20’s – it would be really fun! You know that kind of boom after the war and it’s sort of carefree and people just enjoyed life. But at the same time it would be very cool to go to the future and see if we ever make it to other planets and living on the moon. It would be great to see where technology takes us.