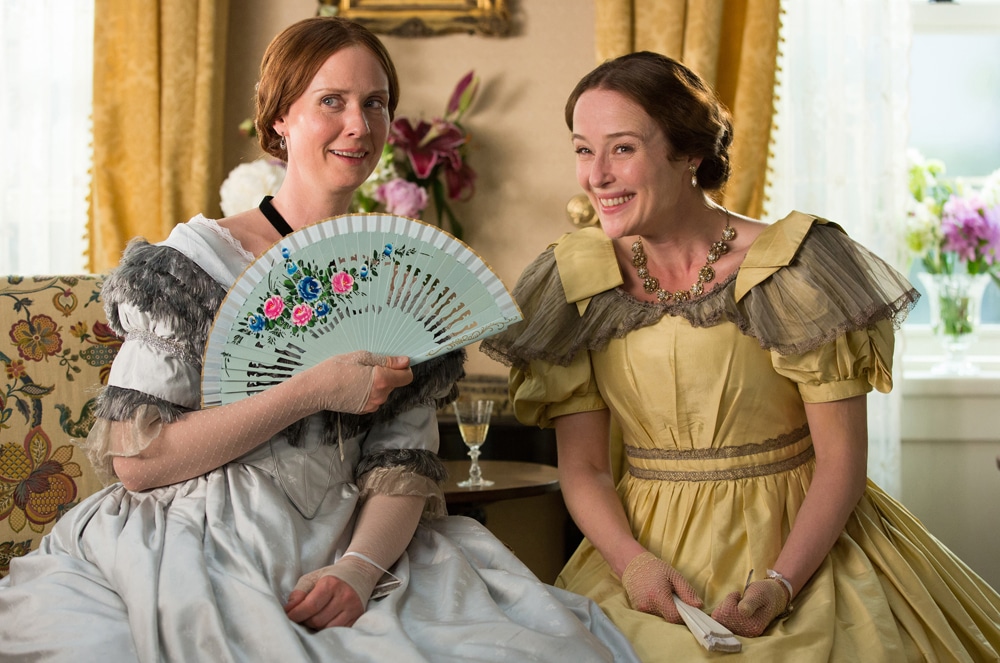 The film A Quiet Passion, which first debuted at Berlinale in 2016 and was featured at TIFF, is finally coming to theatres this weekend. It’s masterful in its performances by star Cynthia Nixon as Emily Dickinson and by actress Jennifer Ehle as her sister Vinnie, who was instrumental in preserving her poems after the poet passed away. We spoke with actress Ehle in the restaurant of a downtown hotel in Toronto during the film festival, just after wrapping up her run in the much buzzed about off-Broadway play Oslo (which, coincidentally, she made her triumphant return to on Broadway last night). In our chat, Ehle had some really wonderful things to say about her director Terence Davies (who we later spotted her in line with at a press screening of Jackie). The following is a condensed version of our scintillating conversation.

Brief Take: What do you appreciate most about Terence Davies?

Jennifer Ehle: I think that is one of the things I love about this film most is how much Terence is in it and how much of it is…not Terence’s story, but it is a very personal film to him, and that it is a film by a great artist about a great artist. And I love the way it examines questions of artistic identity and the complications of one’s relationship with ambition and recognition and their own ability to create and what that means and what that makes them want.

I think that for me it’s fascinating to watch him look back and view his films. I think that all his work is a little autobiographical. I do. I mean, clearly, the first two films obviously (Distant Voices, Still Lives and The Long Way Closes) but he is extraordinary. They’re very personal stories.

Brief Take: You mentioned Steven Soderbergh earlier. In what ways do they compare?

JE: Steven Soderbergh and Terence Davies are two of our greatest directors. Soderbergh was lighting and operating and directing, so it was extremely streamlined and with Terence, there was no lighting. I think that occasionally they cased the joint beforehand but for the most part we would arrive and occasionally we would see he would walk around and sometimes put a piece of paper on a desk for balance or something and that would be it and he would shoot it.

I remember one scene in Contagion where my character went to see her father in the hospital and I had to walk through the ward to get to his cubicle, and Steven, he didn’t even have a dolly, he had his RED on his shoulder and he was sitting with his feet on the wheel of a wheelchair and he was sitting on the back and someone was pushing it, or pulling it and he was being pulled backwards on the wheelchair. It was quite different for A Quiet Passion. We were in a studio for all of it except maybe six days, I guess. They had recreated the rooms of the Dickinson homes on the set in Belgium, and it was…the lighting was like a different character in the film and is a part of it and it has huge emotion and it carries great emotional content I think in the film in general. It was funny, I didn’t live that far from where Emily lives, and I had been to the Emily Dickinson museum many times, which is a museum in her home in that house, and the light, I had lived near there for fourteen years, and to see our wonderful cinematographer and he’s German and had never been to that part of the world and to walk into the room and see him recreate the light from my own home not far from Emily’s home was quite amazing. I don’t how he did it but he did it.

Brief Take: Have you worked with other filmmakers that you feel have brought in their own aesthetic?

Brief Take: Did making A Quiet Passion help you to appreciate Emily’s work?

JE: Yes. I had an appreciation already but I just have more and more respect and appreciation for Emily Dickinson. It’s even amazing now how little she is recognized and even though she has the reputation of being one of the greatest American poets, there still seems to be an odd lack of, not respect, but it’s amazing how little she is recognized. Maybe she is still ahead of her time. I think the female element and I think the female reclusive virgin was easy to dismiss and there still seems to be a stigma attached to it.

A Quiet Passion is currently playing in select theatres.