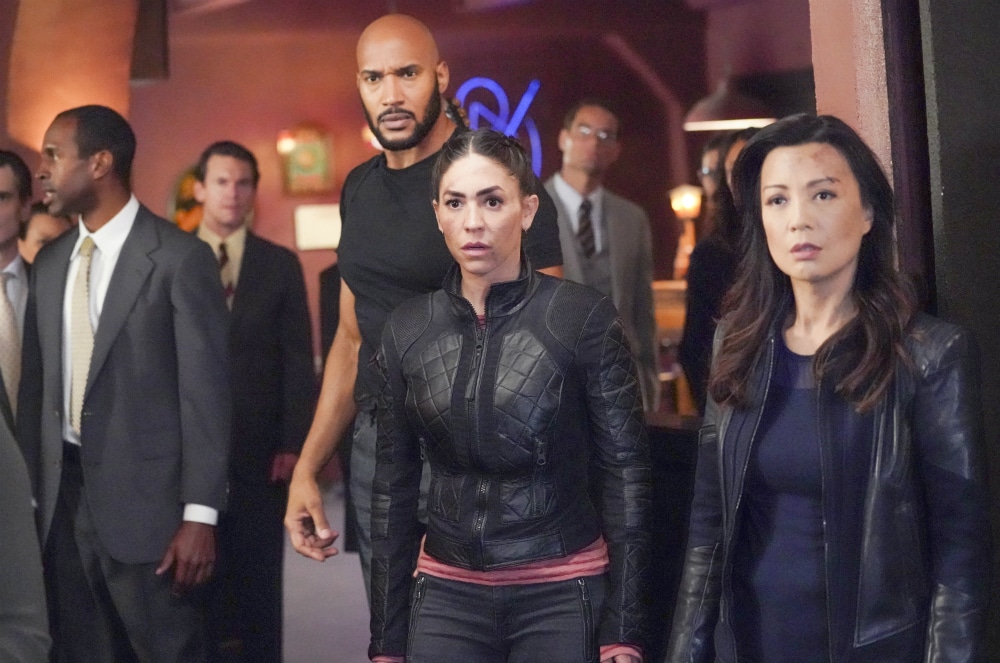 It still feels so surreal that Marvel’s Agents of S.H.I.E.L.D. has ended its spectacular seven season run on ABC and CTV. As fans of the show (including myself) look back in awe on the action-packed (and often very emotional) series, Ming-Na Wen, Henry Simmons and Natalia Cordova-Buckley also recently reflected on some of their favourite moments, what they got to keep from set, and how they feel about their characters’ final scene. The following is a condensed and edited version of our Zoom video chat with the delightful trio of performers from Marvel’s Agents of S.H.I.E.L.D.

Brief Take: What were some of your favourite moments from filming the show, either on screen or off screen?

M-NW: For me, it’s always been the challenges and the fun that we’ve had. Getting to work with these two amazing human beings is always such a joy. And the crew, I love the crew. We definitely had an incredible fun time and that really helped get through the long hours and the painful stunts. It’s a very challenging show to do.

Natalia Cordova-Buckley: For me, it’s one of the first times that I really lived the Maya Angelou saying “At the end of the day people won’t remember what you said or did, they will remember how you made them feel.” Like Henry and Ming said, we won’t remember fights, we won’t remember storylines, we might not even remember our character’s last name, but I will always remember what it felt like to drive onto that set and see everyone coming in and out and just knowing that you’re about to do something you love with people that you respect and admire and learn from, people who are friends and teachers and mentors, and then leaving set when you’re bruised and beaten up after doing a fight scene with Ming, and we’re celebrating that it’s 7pm and we got a 16-hour day done in 9, and we’re so ecstatic and proud of ourselves. All those feelings will forever be a part of my heart and the woman that I am. For me, it’s those memories for sure.

M-NW: Quarantine has made me very lazy.

NC-B: Yup. Or just made us bohemians. 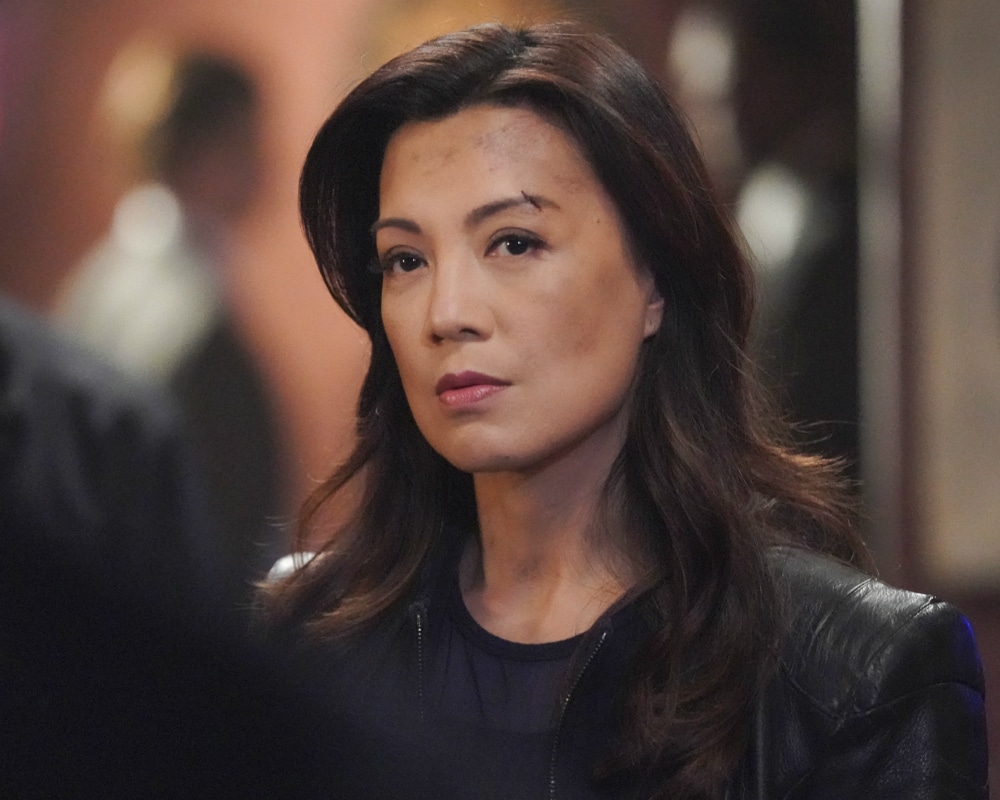 During this final season, all of your characters go through big emotional arcs. How did you relate to that personally?

NC-B: I was just saying earlier that it’s amazing to go back to certain episodes during our whole time on S.H.I.E.L.D., we all have different amount of years that we were on it, but to go back and know what you were going through personally, because of how you looked, how the character looked. I can look at pictures of Yo-Yo and know what was going on in my life and compare the growth from there to now as Natalia and as the character. You’re sort of walking hand in hand with the character all the time during those years – she’s growing and you’re growing, but you have to do the growing for the both of them. It’s interesting and at the same time, I think it helps us be in love with our craft, that you’re constantly building on two people that you have the fortune to be working on, it’s sort of a beautiful thing to mirror and reflect on each and learn from each other.

HS: I think to reflect on the characters and their experiences, they mirror our personal lives as well at times. Life prepares you for your art and, as you said, sometimes art teaches you how to prepare for life – your experiences in life.

M-NW: For me, May is the antithesis of who I am. I cry at the drop of a hat, I laugh all the time, I have fun and am goofy, I get scared easily, and I have a husband who is very steady, not someone who dies like every few months and then comes back as a different entity. [laughs] I think if I take away anything it’s that May has taught me to be less concerned about what other people think, you know? May doesn’t worry about what other people think of her, and I definitely take that away. I like that. You don’t have to prove yourself as long as you know who you are. 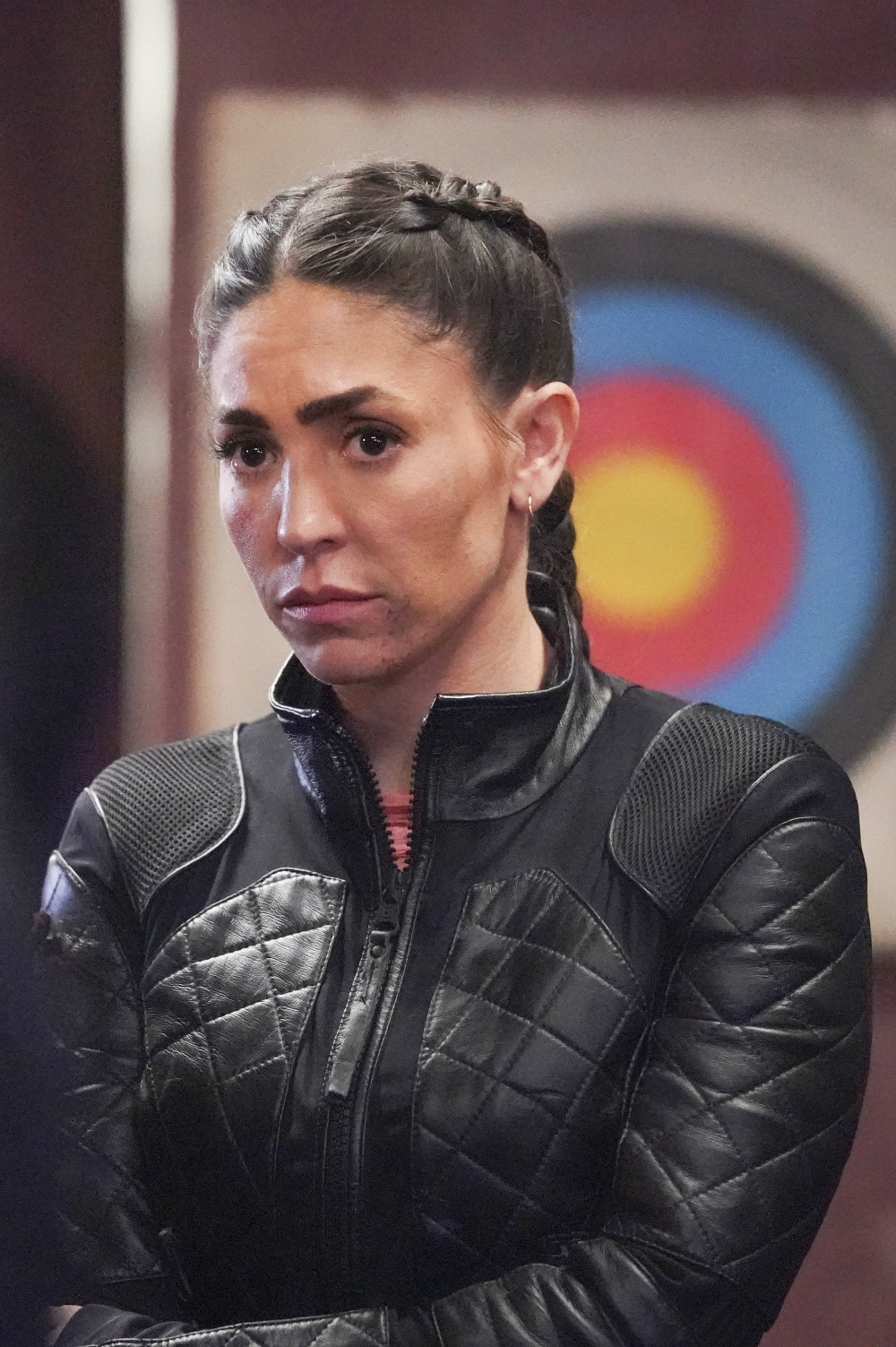 Is there anything, as actors or characters, that you wanted to do on the show but didn’t get a chance to?

M-NW: I didn’t get to hang out with Thor. I mean as the character. [laughs]

NC-B: I always wanted, well it would be taking Yo-Yo’s story too far, but I always wanted her father to be mentioned. He’s such a great character in the comic books and I was always interested because he’s not just a person with super powers, he turns into a monster, a full gargoyle-looking flying lion. So how weird would that be to have your father be that thing? And you know, Daisy goes through it with her father, he’s a psychopath, he doesn’t turn into a a monster. May has gone through it with a lover that turns into something, so I was always really interested in that storyline – how Yo-Yo felt about her father. But it was never explored.

M-NW: That’ll be in the spinoff. Yo-Yo’s spinoff.

HS: You know initially when they paired Mack and Yo-Yo together, I thought they were going to make my character Stonewall, who was part of the secret Avengers. I was going “oh that would be interesting, to have a superpower”, but looking back, I’m glad they didn’t give me a super power. I like the fact that I’m a normal guy fighting in these unusual situations where you don’t know if we’re going to win. There are times when we lose, and I really enjoyed that. Having said that, there really isn’t anything that I wished was done. I found the character’s experience rewarding the way it was. 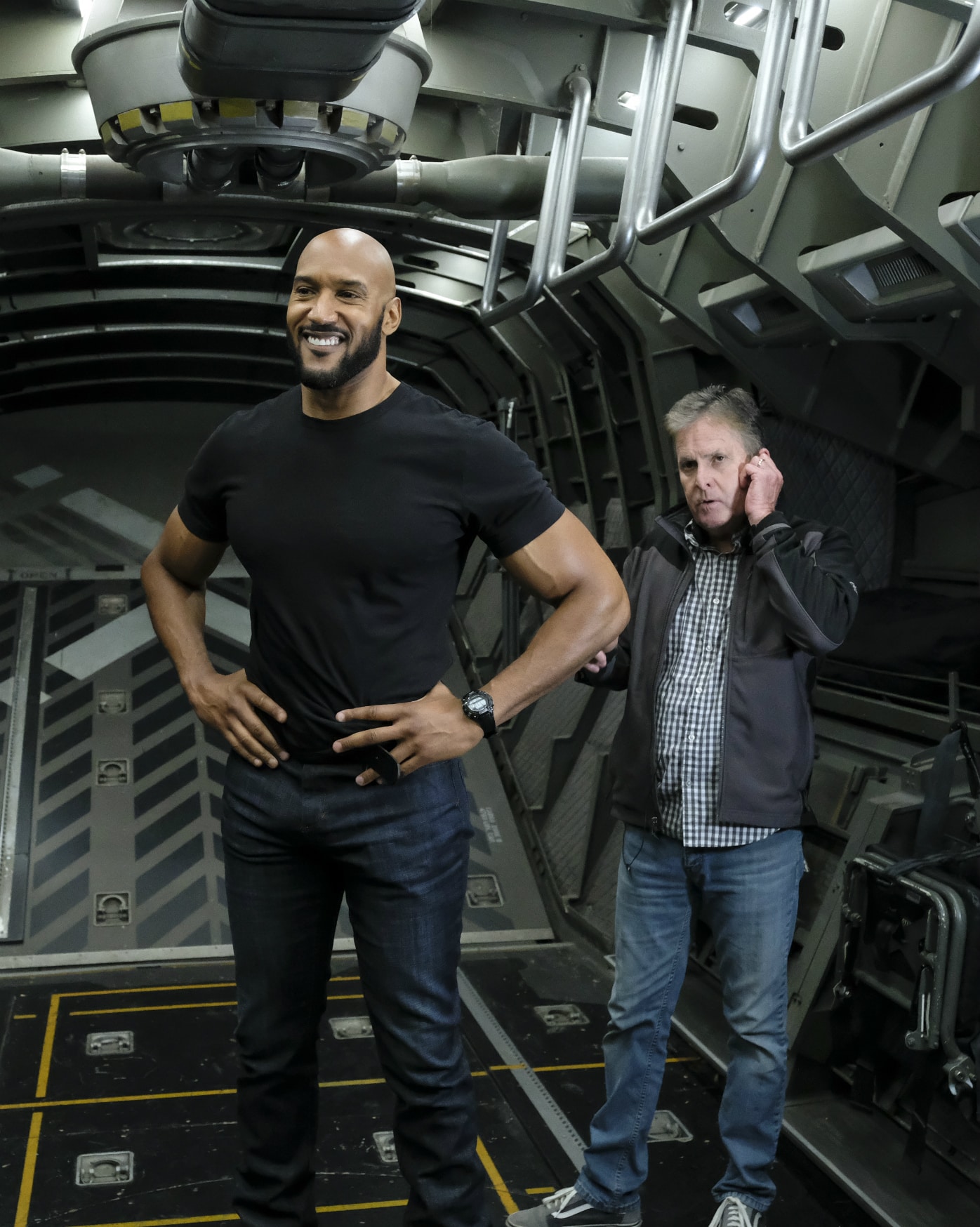 In the final scene, we get to see where each of the characters end up. How did you feel about where your characters wound up?

M-NW: I mean I was happy. I think the fans are going to be happy. For me, May has always been someone’s S.O., whether it was Yo-Yo, whether it was Daisy, so for her to end up running the Academy and being there to uphold the standards and passing on her knowledge and experience to the new recruits of S.H.I.E.L.D., I thought that was very apropos for May, and to be single.

NC-B: Same for me. I thought it was appropriate for Yo-Yo to become a leader of her own squad, she’s kind of been building up to that position. She’s finally there and she’s happy with who she’s with, they’re more settled within the institution of S.H.I.E.L.D., they’re kind of the President and the First Lady.

HS: [laughs] Look, I’ll be honest. I was a little bit surprised because I thought that we would see everyone in their private lives, quite honestly, moving on from S.H.I.E.L.D., we’re no longer fighting, just seeing a settled life. But I liked the way they did it as well. I liked the fact that we will continue to fight for justice. It’s just weird because we’re all in separate places, we’re separated, but I guess that is a nod to life itself. It’s very rare where individuals who are working collectively towards something stay together forever. As it is, life goes on. Gosh, I’m just bringing us down. 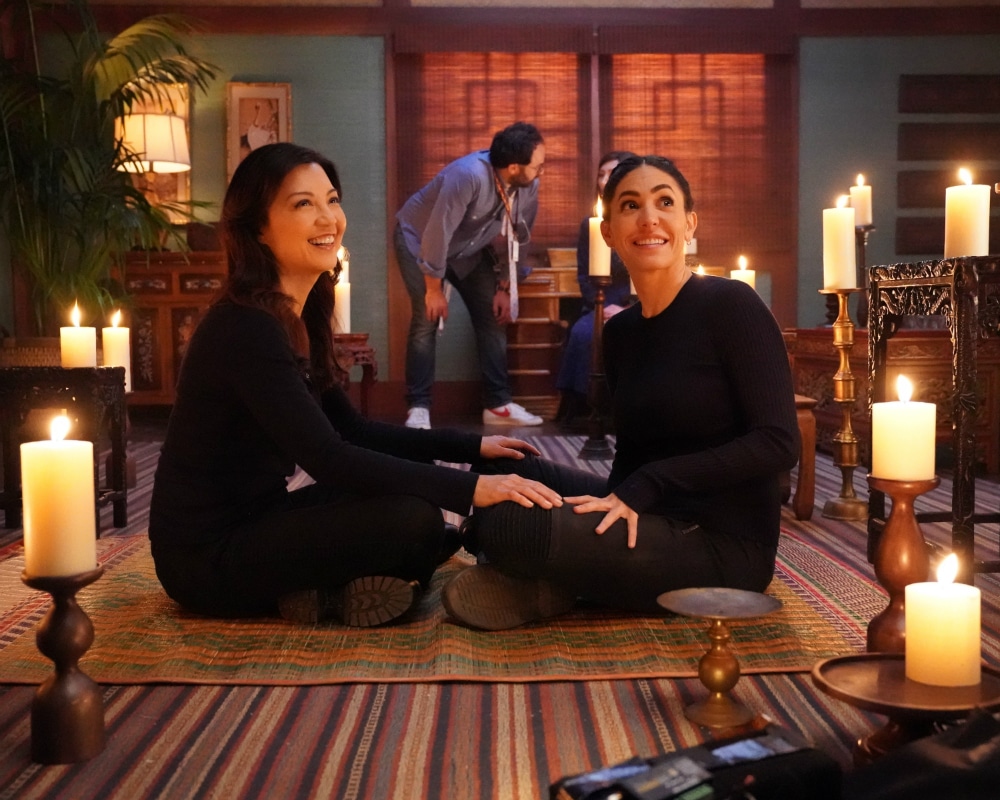 Did you get to keep anything from set? The Shotgun Axe, maybe?

HS: Look, I hear that there’s this auction going on, and I did hear that the Shotgun Axe could sell from between ten and fifteen thousand dollars. I consistently asked “hey, can I have one of the Shotgun Axes?”, because one of them is really nice, but just like a fake one. And “no”, “no”, “no”, I always got the “no”. Then two months after the season wrapped, I got an email and then presented to my door, at my house, was a Shotgun Axe. I’m not going to tell you who it was, it wasn’t anyone from props, it wasn’t any of the executive producers, it was someone who no one would ever guess. A wonderful person gifted me with one of the prototypes of a Shotgun Axe, so I do in fact have that. That was the only thing I wanted and now I have it.

M-NW: And you deserve it. You deserve to have that. You made that thing cool. That is not an easy weapon to use!

HS: Seriously! I did not want to fight with it. I mean I liked it.

M-NW: I kept May’s badge and a few of her outfits. I bled and sweat in those things for many, many hours, so I get to keep a little bit of my DNA and energy from those outfits that I had to wear for 17-hour days.

NC-B: The only thing I wanted to keep which, the same as Henry, they wouldn’t let me, they always told me they’d never let me keep, and then the final day they said “ok, you can take them”, was Yo-Yo’s boots, which I never changed.

M-NW: Those are good boots. Yeah.

NC-B: I only wore a different pair of shoes for one scene.

NC-B: The time period one.

HS: No! There was one other scene!

HS: You were in Miami with your friends.

HS: Oh are you really?

NC-B: Yeah! She actually makes a point to say “I would never wear high heels”. But yeah, I wore them all the time so I chose those, they gave them to me, and then I asked for my gloves and they said “absolutely no”, and now I hear they’re being auctioned off. Which, by the way, no one wants to buy those gloves. I had to learn how to go to the bathroom with those gloves, so.

NC-B: It would take 15 minutes to take them off and on, so I had to learn how to go to the bathroom with them on.

HS: The price just went up!