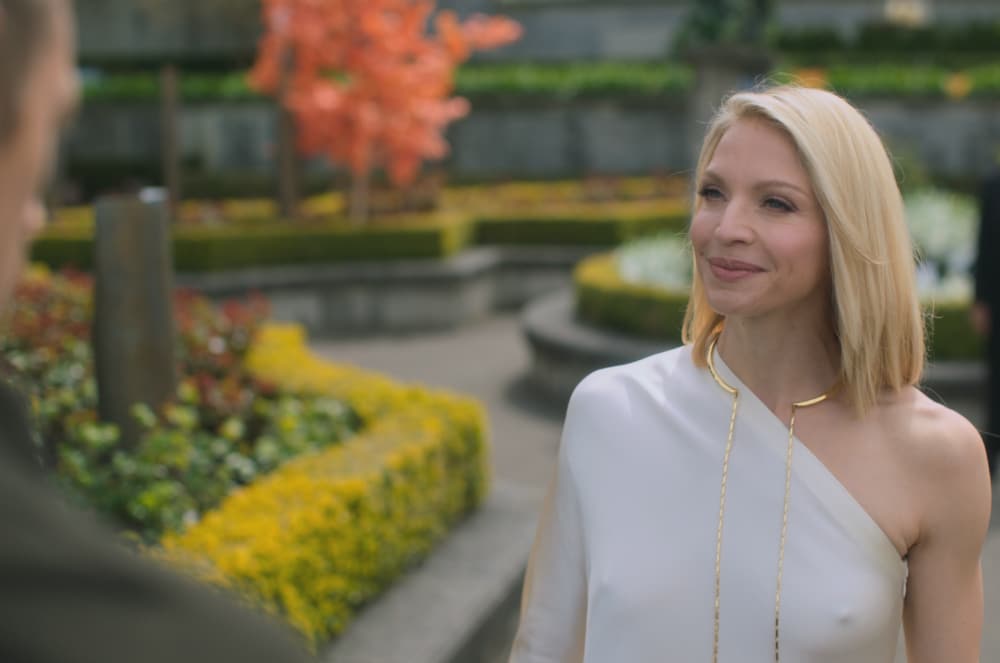 From the first few minutes of Altered Carbon, I was hooked. The Netflix original show is a gritty, film noir-esque detective drama that combines fantastical sci-fi elements with a pulpy whodunit narrative in a visual landscape that would make Roger Deakins jealous. Adapted from Richard Morgan’s novel, the show was a passion project for showrunner/executive producer Laeta Kalogridis for over a decade and it’s not difficult to see why. It’s cerebral, twisted (in the best way possible) and features a stellar cast led by Netflix muse Joel Kinnaman (House of Cards, The Killing), Martha Higareda, James Purefoy (High-Rise, Rome), Hayley Law (Riverdale), Dichen Lachman (The 100) and Canada’s very own Kristin Lehman. The powerhouse triple threat (actress, producer, director) sat down with us and an intimate group of fellow journalists to talk about reuniting with her The Killing co-star Joel Kinnaman, the necessity for female showrunners (such as Altered Carbon‘s Laeta Kalogridis, Transparent‘s Jill Soloway and The Marvelous Mrs. Maisel‘s Amy Sherman-Palladino) and her hope for increased future opportunities for women in the film and tv industry.

The following is a condensed and edited version of that roundtable discussion.

This is your second time working with Joel Kinnaman, though this is a very different power dynamic than the one you shared on The Killing. What do you like best about working with him?

Kristin Lehman: Once I heard that Joel was on board to do the show, because he was the first one cast, I knew immediately that I wanted to get involved. I think that Joel, as an actor, is such an excellent actor, but he also makes incredibly interesting creative choices with his career. Having worked with him on The Killing, I was familiar with his work ethic and how he invests in projects. The kind of male lead that you’re working opposite really matters. I was really lucky because I thought, “Ah, this is going to be great”. So I kind of used him as a barometer, to tell you the truth. *laughs* He made me want to do it.

The show combines sci-fi elements with the noir genre and your character is very much the central femme fatale.

KL: The rules of this world are so fantastical and so clearly the genre of sci-fi. But Laeta was very clear, even with my initial audition, that it was film noir that they were looking for, and Miriam is written as the very obvious femme fatale. What it felt like we were making was a very specific stylized story and it felt beautiful. It felt grand and sweeping and thoughtful and gorgeous. I know those are odd ways to describe what is a hard core sci-fi genre but Laeta had, in the people she gathered to make the show, mashed up the best elements, the most sumptuous elements of storytelling that people resonate with and applied that to sci-fi. Which is why I think Blade Runner was so successful when it first came out. It did a comparable thing. Not that Laeta in any way was copying that, but again it captured the zeitgeist of a lot of elements that people are drawn to in its authenticity. I think, to their credit, the people that made this, the technicians that did it, the production design, they leaned into that, as opposed to shying away from it.

Speaking of leaning in, what I loved most about the show were the strong, independent female characters. Miriam, Kristin [Martha Higareda], and Quell [Hamilton’s Renee Elise Goldsberry] are so empowered and empowering to watch. Is that one of the elements of the show that you were drawn to as well?

KL: Of those characters, I don’t know that Miriam felt empowered. I felt that she was an important part of telling the story and I think she was unapologetic, and that was really quite thrilling. I feel that Laeta’s strong influence that I’m really quite grateful for, in terms of empowerment, is choosing a woman who’s in her 40s to play a role that was written for someone in their 20s. And that, to me, is where her creativity and wisdom and broadmindedness as a female showrunner comes through, and also in the beautiful diversity that you see in our show, that also stems directly from Laeta’s passion to have a world that looks like the world that she lives in. To try to have an authentic and interesting palette for a show that is not like many other shows on television.

The show explores some very dark turns that technology have taken. Were there any aspects of those technological advances that you found particularly fascinating?

KL: I’m answering as a viewer. I thought the Reileen [Dichen Lachman] character was fascinating. She’s so facile and I thought that was pretty great. And her ability to be facile is a by-product of the world that we’re talking about, so I found that satisfying. And then from a personal perspective, I don’t know how successful this would be if it was actual real life but certainly as a person who loves the people I love, and for the world in general, I want ways to ease suffering. So if that meant no disease, I mean I guess we’d have to see how far that would take us before nature needed to balance itself out. But yeah, I’m compelled to want people to feel ease and be healthy and be happy and lots of things that are put forward in this show.

You’ve directed two episodes of Ghost Wars and you directed and produced Motive and now, of course, Altered Carbon‘s showrunner, Laeta, is female. Do you see a move in the industry now to bring on more female directors, producers, crew members and showrunners?

KL: I do see a movement towards it! My guess is that statistically we’ll also see numbers going up as well. I think that what really began to make some incredibly slow movement in that direction with the ACLU’s announcement that they were now, at least a year ago, examining the discrimination within the film industry in terms of how they hire for directors in particular. That, from a political perspective, I know there are various guilds and organizations that have to, they’re being held accountable for the way things are being made and the way things are being run. I also believe that women are helming and making successful products that are selling, because what it really comes down to is that this is an industry that sells a product. If your product makes money, then you’re met with greater success.

Obviously it’s like the chicken and the egg. We need women to tell stories to prove that the stories can sell. But yes, I do feel that there is movement, albeit a slow movement. I think that that’s certainly something that I want to continue being a part of – helping move the needle in that direction. I think it’s necessary and a long time coming and has everything to do with an equality that isn’t…no one is asking for permissive equality. It’s an equality that is a very human element that is necessary and important because we are humans and there isn’t a superiority based on gender. The areas that I’m really intrigued by and areas that I want to continue elucidating and being a part of is the fact that I’m waiting for more to come out. Jill Soloway’s speech, maybe two years ago now, when she said, “when you go to set, don’t eschew your emotions. All the things we’re told are not good leadership, in fact are great leadership”.

So recently when I directed Ghost Wars, there was a time when I was younger when I would have felt that my desire to collaborate or my openness with communication, my compassion on set and my real desire to connect with the people I was working with, the men I was working with, would be seen or taken as weakness. I’ve been around long enough to believe that I don’t need to step onto a set and pretend that I’m a man and that authority and leadership and direction can sometimes overlap and have similarities in genders, but other times I will lead with the things I value, and those things, for the most part, are considered feminine. But I think that that definition is also being broadened by men who also say, “You know what, for a long time I’ve been taught to respond a certain way, alpha aggressive ways, and it never felt right to me”. And Jill said it so beautifully when she said, “If you can’t cry on a set that’s about emotions, where else are you going to cry?!”. Bring your tears to set. Bring your strengths to set and those things are innately feminine.

So really what we’re talking about is continuing the opportunity for women to tell the stories. And yes, I really do want to continue directing.