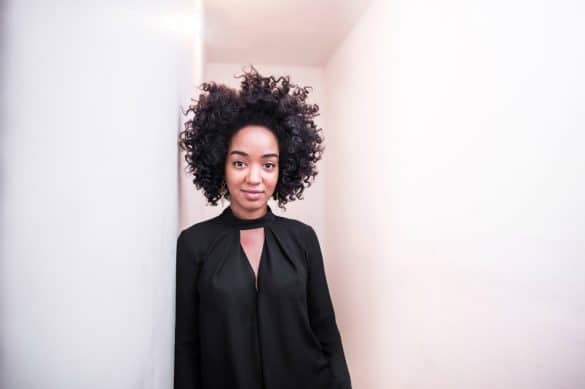 On her website, Amanda Parris describes herself as “Artist. Educator. Scholar. Dreamer”. It is these qualities that interested us in hearing from Parris (as well as the fact the multitalented Parris has experience on our side as well)  about Other Side of the Game, which is playing now at Aki Studio Theatre on Dundas Street in Toronto from now until November 5th. We spoke to Parris by email and tried to change up the questions a little bit.

Brief Take: I first discovered your play through your work at CBC. Curious as to how your experience working specifically for the CBC, a public broadcaster informs your playwriting?

Amanda Parris: For this particular production, I don’t think my work at CBC has informed my playwriting because I began writing this play long before I started working here.  It was already several drafts in development when I got in the building. However I think that my future writing will definitely be indirectly informed by my experiences at CBC. Through my work at CBC I get to connect to so many creative people – musicians through Marvin’s Room and artists of all stripes through Exhibitionists. Listening to so many artists talk about their creative inspirations and having them walk me through the meat and bones of their technical process will probably filter in some way into my own ideas and craft.

BT: There are a lot of firsts, especially bringing together Cahoots Theatre and Obsidian Theatre for the first time and this being your first public production. Do you prefer to stay loose or keep it tighter as a result?

AP: I think it requires a balance of having a clear vision of the story I want to tell but leaving room for flexibility and negotiation. As a novice to this whole thing, there is a lot that I had to learn and understand about the process of putting a play on the stage. Witnessing the entire rehearsal process from the perspective of a playwright was incredibly enlightening as I saw my words find life through the performance of the actors and the vision of the director. I was able to understand the moments that may have worked on the page but had difficulty finding life on the stage. It forced me to recognize the things that needed to be cut, the lines that might require a slight alteration and the moments when I needed to keep true to my original vision.

BT: Could you tell me a little bit about The Ride or Die Project Mixtape Volume 2?

AP: The mixtape is an unofficial soundtrack to the stories within the play. It is filled with music by Canadian and international artists that responds to the themes of the play.  The term ‘ride or die’ emerged out of Hip Hop and it was in Hip Hop music that I first heard this concept described and celebrated. For years in rap music, the “ride or die chick” was placed on a pedestal. The mixtape is a combination of those songs and other tracks that challenge this often romanticized notion. I chose the songs and then the Toronto deejay sound system Roots Redemption mixed all of it into an incredible playlist. We gave out hard copies of the mix during the opening of the play. It was my hope that people would pop it into their car’s sound systems on their way home so that they could stay immersed in the world and energy of the play.

BT: What’s changed for you (and the work) between its genesis and bringing it to the stage?

AP: The work has transformed so many times over the four years that it took to bring it production. There are certain scenes that have had six and seven different incarnations before I found the right formula. I initially wrote the play believing that I would perform in it and I did perform in it for the first two readings. But then my dramaturge Marjorie Chan encouraged me to do a reading where I didn’t go on stage but instead focused on my role as the writer. Sitting back and watching my words on the stage was a hugely transformative experience. I appreciated the perspective so much that I haven’t returned to the stage since. I went from being an actor who writes to a writer who sometimes performs.

Find out more about The Ride or Die Project here: https://amandaparris.com/the-artistic-director/the-ride-or-die-project/