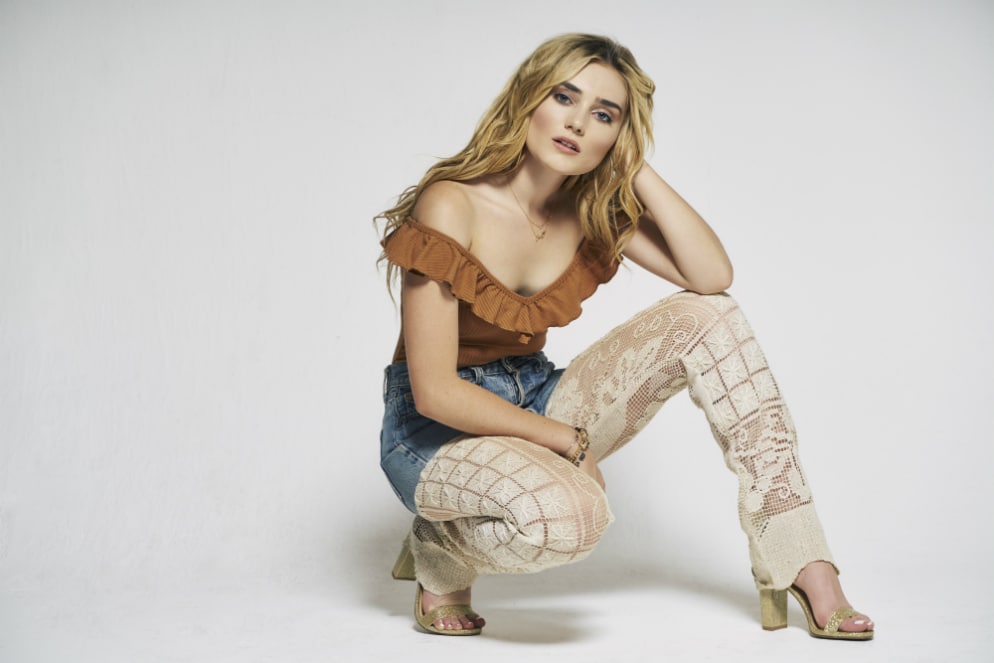 Meg Donnelly is the definition of an all-around decent, cool person. Polite, stylish, classy, Meg and I found a great rhythm in our phone conversation in early August, right before her first single, Smile, dropped. We were speaking in advance of the new season of American Housewife, in which Donnelly plays Taylor Otto. But we also spoke about Z-O-M-B-I-E-S (which filmed in Toronto), her recent trip to Japan, how to fight online trolls, and much more.

Here is a condensed and edited version of our chat with the illustrious Meg Donnelly.

Brief Take: What did you enjoy most about filming Z-O-M-B-I-E-S in Toronto?

Meg Donnelly: Actually, a year ago today, I was still there. It was crazy. We were there from April to July, and it was so cool because I had never been to Canada before, like at all. And everybody in the cast, other than the four or five of us who were from America, everybody else in all the cast and crew was from Canada. So just being in a different country and just learning about the culture was so great. I loved having people from the actual city of Toronto show us around. We got to go to Queen Street West and Kensington Market and the Eaton Centre, and all of the fun places to go in the summer. It was so much fun just being with the people from Canada and exploring the city with them.

MD: Yeah, it does feel like yesterday. When I think about all of the things that have happened since Z-O-M-B-I-E-S, it’s kind of crazy! [laughs] We did the second season of American Housewife, I went to Hawaii for a week and I went home for a month. Then I was working and I just came back from Japan, so since I realized that all that happened, I was like “okay, that was a really long time ago.” [laughs]

MD: Yes. I fully moved to L.A. in August, so I don’t even have a place in New York anymore. I’m primarily out here, just because everything’s out here.

BT: This was your first time in Tokyo, what was that experience like?

MD: It was insane! It was so incredible. I want to go back so badly. It was sort of cool too. I have friends there and I haven’t seen them in so long, so it was fun to catch up with them and explore the city and actually speak Japanese every day in conversation to people on the street. It was so crazy and so much fun. Since I was little, I always had a fascination with the Japanese culture. I don’t know if you’ve ever been to Disney World in Florida, at Epcot, the Japan part of Epcot, I always used to go there. It was my favourite part of the whole park because I always wanted to go to Japan. So it was like “let’s go to Japan in Epcot!”. But when I started actually learning Japanese, there was this Japanese boy band that were exchange students at my school, in New York, which was so crazy! There were ten members but they didn’t really speak English that way, so I tried to help them learn English and they taught me Japanese, and it kind of went from there. 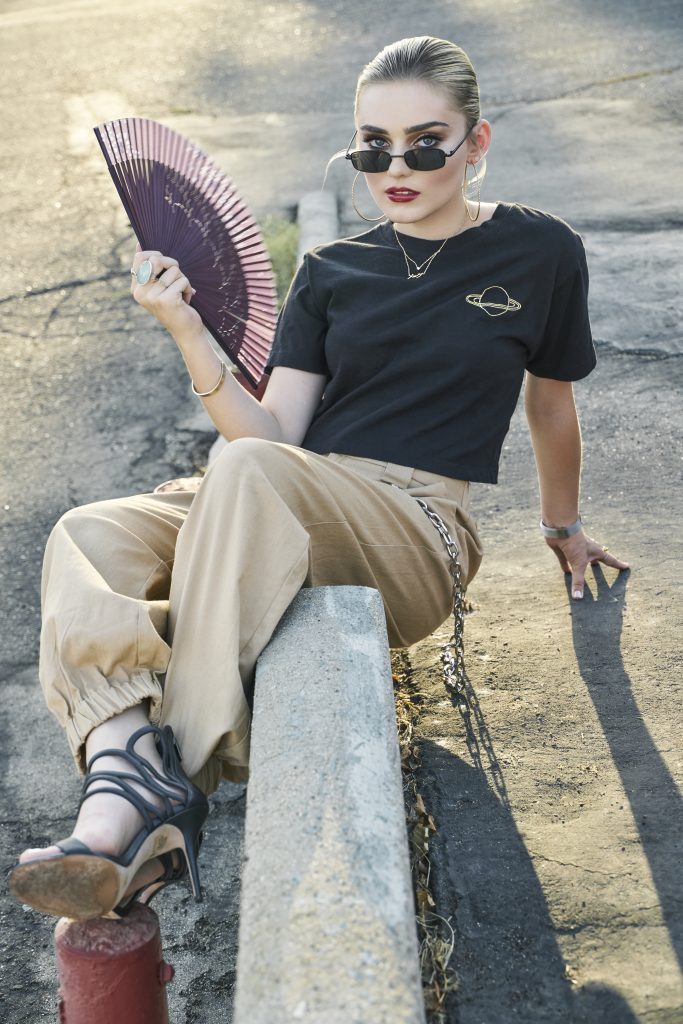 BT: What does it mean to part of the Disney family?

MD: It’s so amazing, and American Housewife is a part of it because ABC is with Disney as well. With American Housewife and with Z-O-M-B-I-E-S, it’s been such a dream come true! Since I was little, Disney Channel was my whole childhood. So being a part of other children’s childhoods is kind of crazy. And I think Disney is really special, they have this cool connection.

BT: And you get to go to all the premieres! At Ant-Man and the Wasp, you had birds in your hair!

MD: Yeah, it was so much fun! And it’s crazy because I’m a huge Marvel fan. When I was little, I read all of the comics, everything! Now that Marvel is a part of Disney, it’s mind-blowing. [laughs]

BT: On American Housewife, Katy Mixon and Diedrich Bader must be cracking you up all the time.

MD: Yeah. Oh yeah! They’re so funny. Now that we spent two years together, there’s more of a flow happening, where we just know how the Otto family works and what their intentions are and what their characters are. So it’s definitely really cool, you kind of just know what’s happening at all times. Diedrich and Katy are so funny, and not just them but everyone in the cast, even the crew is hilarious. So going to work, you just know that you are going to be laughing all day, which is really awesome to think about. Katy and Diedrich are also so supportive. they definitely are like parental figures to me.

BT: What are you most excited about for the upcoming season?

MD: I’m definitely excited for just more hilarious storylines. And now that Taylor has her boyfriend Trip, I think there’s going to be a lot of funny things happening. Trip is so funny and I think teenage relationships are just very relatable as a whole, for parents and for teenagers as well. It also shows the struggle that parents go through as well while there is a relationship happening. [laughs] Look out for more family drama that’s funny and relatable. [laughs] 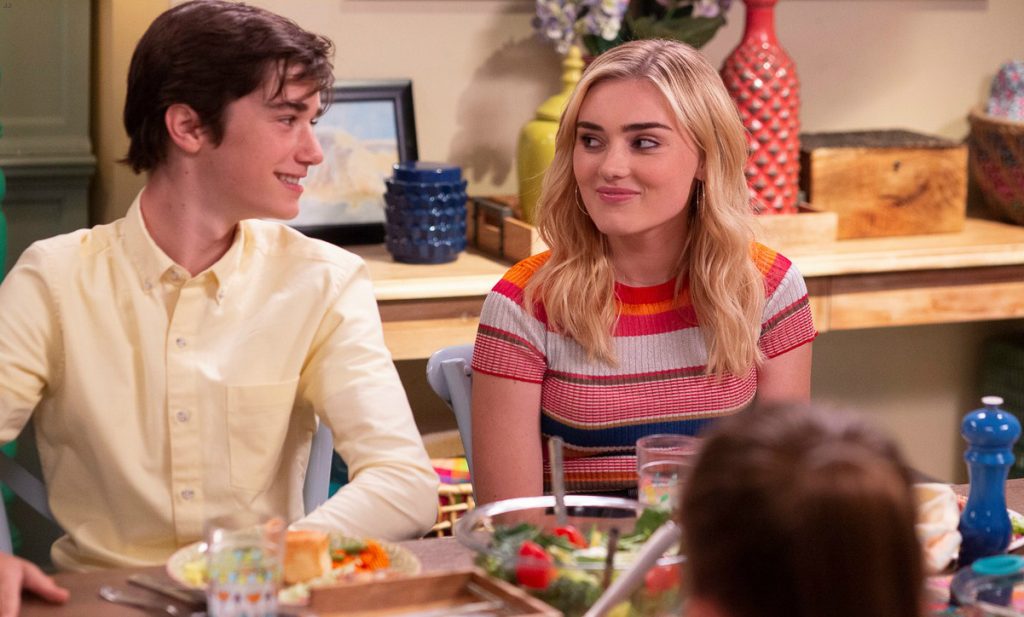 BT: You are constantly speaking up against social media trolls and your struggle with anxiety.

MD: Yeah, I was just talking about this yesterday. I think that with social media and people constantly being on their phones, they are checking for validation. And they are constantly living through people’s lives even when they don’t realize it, you’re constantly looking at people’s “lives” on Instagram. I think that really gets to people and it increases anxiety. Social media is a great platform for sharing images, but you shouldn’t take it too seriously, and should focus on yourself before focusing on others. The need for Likes can get to you as well.There will always be mean comments, and everyone’s going to put mean comments no matter what, because these trolls can, they think “why not?” I definitely have a lot of tips that help me when it comes to my anxiety and panic attacks. Being on social media has made me realize how many people out there are also going through the same thing… I wish I could help everyone out individually.

BT: Who are some people to whom you look up?

MD: I really look up to Zendaya. She’s a cool role model. I mean she can act, she can dance, she can sing, and she also does a lot of charity work as well, and she speaks up for all of the things that she believes in. I think her transition from Disney to her more adult career was so graceful.

MD: My dream role is to be in a Marvel movie. [laughs] Marvel is definitely a dream. I think to be in an action movie would be so much fun. I’d just like to be a dope heroine, like someone along the lines of Scarlet Witch of the Avengers, I think she’s so cool. Or like Rey from Star Wars. I look up to those characters so much.

BT: How do you stay so grounded?

MD: Definitely my parents – they always keep me grounded and always help me through any type of situation. Also, I’m just so grateful for all of the projects I’ve been working on. I started auditioning professionally when I was eleven, and started American Housewife when I was sixteen, so it’s been a while, and it’s been a lot of hard work. I really appreciate all of the hard work and dedication that everyone puts into everything. In this business it’s a really a dream that you must have, and you have to work really hard for it because it’s not easy at all, but it is very fun, there is nothing like it. And that is why you stay dedicated.

American Housewife airs on Wednesdays at 8:30pm on ABC