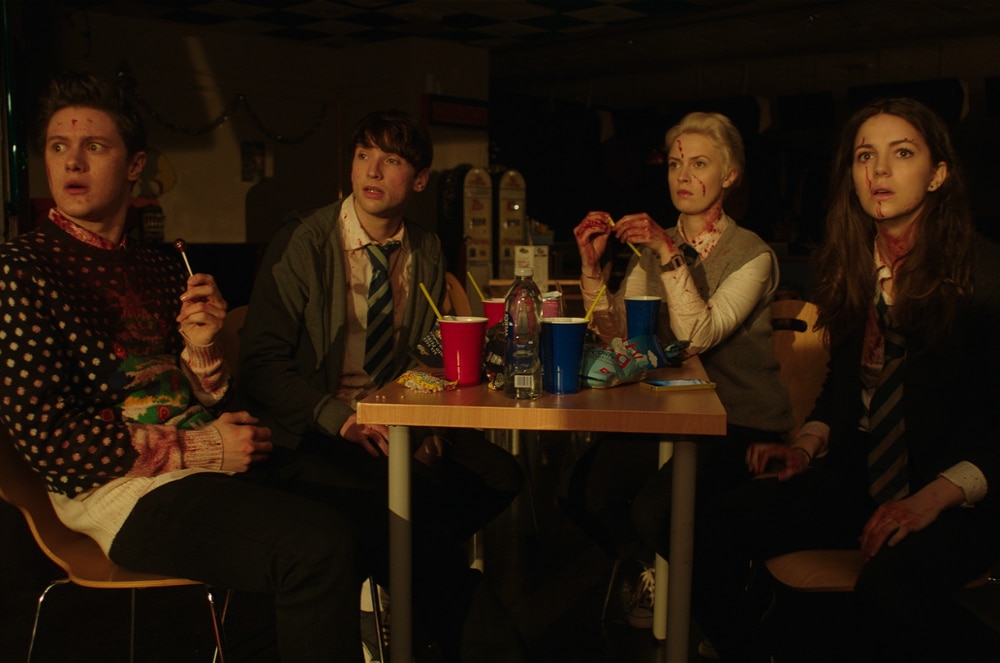 Picture a hybrid of Shaun of the Dead and High School Musical, with some fascinating philosophical arguments surrounding social media, learning from one’s parents, and seizing the day, and you’ve got Anna and the Apocalypse. It’s a wholly original Christmas zombie musical that’ll have you cheering and tapping your toes in equal measure (sometimes at the exact same moment). We saw the movie two weeks ago and we’re still humming the catchy songs (you’ll definitely want to buy the soundtrack, trust us!).

Recently we had the chance to sit down with the film’s stars Sarah Swire (who also choreographed the film) and Christopher Leveaux, and the following is a condensed and edited version of our lively conversation.

SS: All of us had such a nice time on set and we all became such close friends very, very fast. I’m so grateful that [to Christopher] you’re in Toronto, and it’s someone that I can check in with but also another friend who’s an artist and who’s developing your own work in the same way that I am; someone to bounce ideas off constantly. If I’m ever working on something, I’ll just send it to you. He’s just such a supportive human being. [laughs]

CL: And that was the theme on set – people were always supportive, and there was never really a game of egos, which sometimes you can get on set. We were all in this one changing room together, well we were separated for the actual change, but we had a common room together and there were no separated trailers. So that helped warm up the atmosphere on set. And (director) John (McPhail) selected people who were of similar ilk, so it was kind of a magical time. But what I liked about working with Sarah, in particular, is that she listens and appreciates everything you say. Even if you aren’t necessarily being clear about what you want, she tries to understand you. She puts validity into everything you’re trying to say, so you always feel supported.

SS: Same with you.

BT: Sarah, we know that you choreographed all the fun musical numbers, but did you also have to teach everyone the choreography?

SS: Yeah, definitely. It was an interesting process. I was there for a week by myself before we had to shoot anything, in the basement of the canteen where ‘Hollywood Ending’ was shot, as well as some of the other parts of the film. I was essentially trying to choreograph it myself from ideas that I had worked out in my notebook, and planning it out in that space. I played all the parts myself and video-d myself playing the parts, stitching together a series of one man flash mob videos of everyone’s tracks, and then sending those to everyone and stitching it all together in front of a live crowd. We all had the privilege of working together as a cast to get the character beats a few days in advance. In terms of teaching it, we had so little time because of the indie budget, so sometimes we had to choreograph huge numbers with only an hour on the day of the shooting. So I was trying to balance what was possible, but also what looks good and what everyone can pull off, no matter what your movement background is, and what people are going to have fun doing. You don’t want to be given a set of moves that you don’t want to do. You want to be able to celebrate and feel the joy in the incredible music that Roddy Hart and Tommy Reilly wrote, and be in the moment in the incredible set design. So I was really thinking of everyone’s happiness at the end of the day. 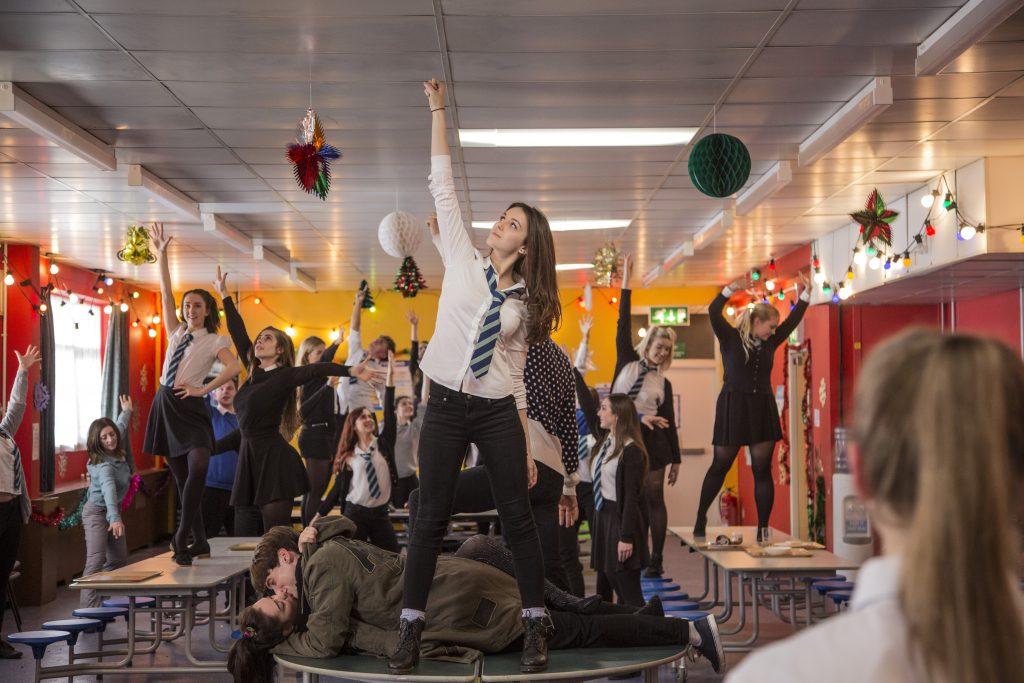 BT: Speaking of happiness, which scene brought you the most joy to shoot?

CL: SO many! Every day was such a joy. ‘Hollywood Ending’ was the beginning of the shoot and that was friggin’ exciting because you get to be a part of this huge musical scene, jumping on tables, doing everything that you wanted to do in school. I had visions in school of standing up in the dining hall and bursting out into song and everyone going “wow!”. I never got to do that. So that was kind of cool.

SS: [laughs] Chris was great in every single situation where there was a movement thing. I’d be behind a screen watching with John, our incredible fearless leader, and Chris would scurry up and say “Sarah! Can I do this?” and he’d act out certain moves for me, to which I’d say “you do that!”, and he’d be so excited. And all of that made it into the final cut, which is awesome. [laughs]

BT: Are there any of those moves that viewers of the film should look out for?

SS: [to Christopher] I mean your heart explosion move is my favourite.

SS: It’s this part towards the end of ‘Hollywood Ending’ where [Sarah then does the move for us]. It’s beautiful! It’s the best part of the whole movie. [giggles]

BT: Did you ever have a moment on the set of this film where you were really impressed by someone?

CL: Sarah! She just embraced her role as choreographer. She made a complex thing so very simple. For example, in ‘Hollywood Ending’ where there are so many different moving parts, and you’ve also got the camera to deal with and the director to deal with, and she was able to manage all of that without screaming. [laughs]

SS: I would say the same thing about you and your portrayal of Chris. He could have gone in so many different directions and [to Christopher] your ability to play sincerity and graciousness and even naiveté mixed into that, you gave him so much heart. He’s such a loveable character and perfectly portrayed and that’s because of you.

SS: Everyone in the cast was great. Marli Siu, that again could have been a classic ditzy role, and she threw some absolute grit in there. She’s an incredible actress. Ella Hunt, her tenacity and vivaciousness, and just waking up every day and being on set just knocking it out, she’s just so badass. Ben Wiggins, despite him being a dick in the film, he’s the nicest person and the funniest person you’ll ever meet in your entire life. You can’t play an asshole if you’re an asshole. You have to be a nice person to play an asshole, and that’s a testament to Ben. And Malcolm Cumming is literally John.

SS: On the first day, when we were doing rehearsals with the cast, Marli came up to me and said “Umm, do you think Malcolm is method?”. [laughs] And I was like “what?”, and she said “is he just playing with John or is that him?”, and I said “no, I think that’s just Malcolm. I don’t think he’s a method actor.” He just is John. [laughs] Apparently he showed up to his audition in a Ghostbusters sweatshirt and they were like “that’s the guy!”. They’re all the best.

CL: I came over here just to get away from London for a bit and to try out the industry here, and it’s been good. The best thing has been to be able to meet the people here that I have. Even though I didn’t meet Sarah here, I met her working on the film, but it’s a very encouraging environment here I’ve found, and I’ve discovered parts of myself that I didn’t know about. Being here has allowed me to open up, I think. That’s my Canadian experience.

SS: That’s been my experience too. And Rebeccah Love is an incredible young woman. She is deeply, deeply inspiring and I’ve done three films with her now. She writes beautiful pieces about the human experience, much like what this story is, despite it being tangled up in this intricate web of genre. And much like Anna and the Apocalypse, her sets are incredible, the people she works with are incredible, just genuine and funny and driven individuals. I’m very lucky to have met her at this point and have made the wealth of work that we’ve made together. I love Rebeccah Love.

BT: What are your plans for the holidays?

CL: I’m just going to be watching this movie a whole ton! I’ll be buying tickets, hitting the box office up.

SS: Calling my friends and seeing this movie. [laughs] I’ll be going home to see my family and working in the six.

CL: Yeah, enjoying Christmas. It’s been two years building up to this moment. It’ll be nice to see people going to see this movie in theatres.

Anna and the Apocalypse is now playing in theatres!